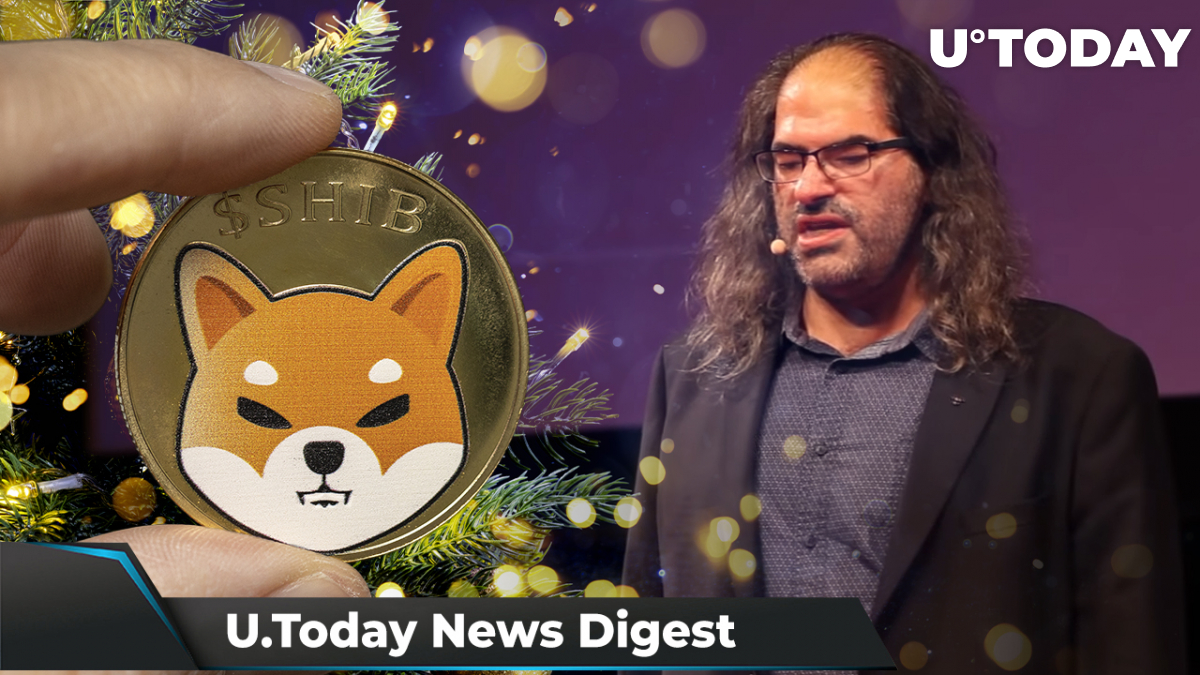 The year 2021 was rich for all kinds of crypto events - from Elon Musk’s spicy tweets and Shiba Inu ups and downs to the cryptocurrency ban introduced in mainland China and Ripple’s ongoing legal battle with the SEC. Before the countdown to 2022, let’s take a look at the top five news stories over the past day.

The recent AMA session on Twitter Spaces held by the official Shiba Inu Discord channel excited meme coin holders as Queenie, the channel’s moderator, hinted at a big surprise waiting for the community in early 2022. To intrigue SHIB supporters even more, Queenie did not go into further detail, leaving them guessing. Apart from that, the moderator answered questions regarding Shibarium (it would be released "as soon as humanly possible"), Bone ShibaSwap (it will be utilized as a native token on Shibarium) and a rivalry with Dogecoin (it is "healthy" and mostly just "banter").

David Schwartz, chief technology officer at Ripple, appeared to be working on the optimization of the BTC code for mining pool applications back in 2011. It was first discovered in 2017 by major XRP supporter Tiffany Hayden, who checked GitHub and found Schwartz among the large group of developers who modified the BTC code. Now, the Ripple CTO openly admits this fact.

Schwartz is on the list of BTC developers along with Peter Todd and Gavin Andresen. The latter was picked as the "core maintainer" of the Bitcoin open-source code by Satoshi Nakamoto himself.

According to recent on-chain data, the average SHIB balance on whale wallets has increased by 28%, reaching 2.6 billion tokens. The rise of balances on whale-tier addresses was detected after retracements during the recovery rally that earned SHIB investors a 28% profit in four days. However, the Shiba Inu surge has come to an end as a result of the sell-off on larger cryptocurrencies such as Ethereum and Bitcoin, making the meme coin drop 13% in two days.

In his recent interview, Tether co-founder Brock Pierce told Fox Business that if Bitcoin happens to surge to highs of $100,000 next year, this would not hit him as something unexpected. He later added that, in his opinion, the flagship cryptocurrency could even break above $200,000. Pierce believes that the key catalyst for Bitcoin growth will be global uncertainty within the financial system. However, he does not view it as a gold-like hedge against inflation due to its risky and volatile nature.

For the first time since 2011, a Satoshi-era Bitcoin wallet has woken up and moved its funds. Thanks to Bitcoin's massive growth over the past decade, an initial investment of $8,425 has turned into an eye-popping $23.7 million. The most likely explanation behind earning this impressive Bitcoin stash is someone accidentally discovering or finally unlocking a dusty crypto wallet.

At the moment, BTC is trading at $48,000, according to CoinMarketCap.