Cardano and Smart Contracts, Everything You Should Know: Comprehensive Guide by U.Today 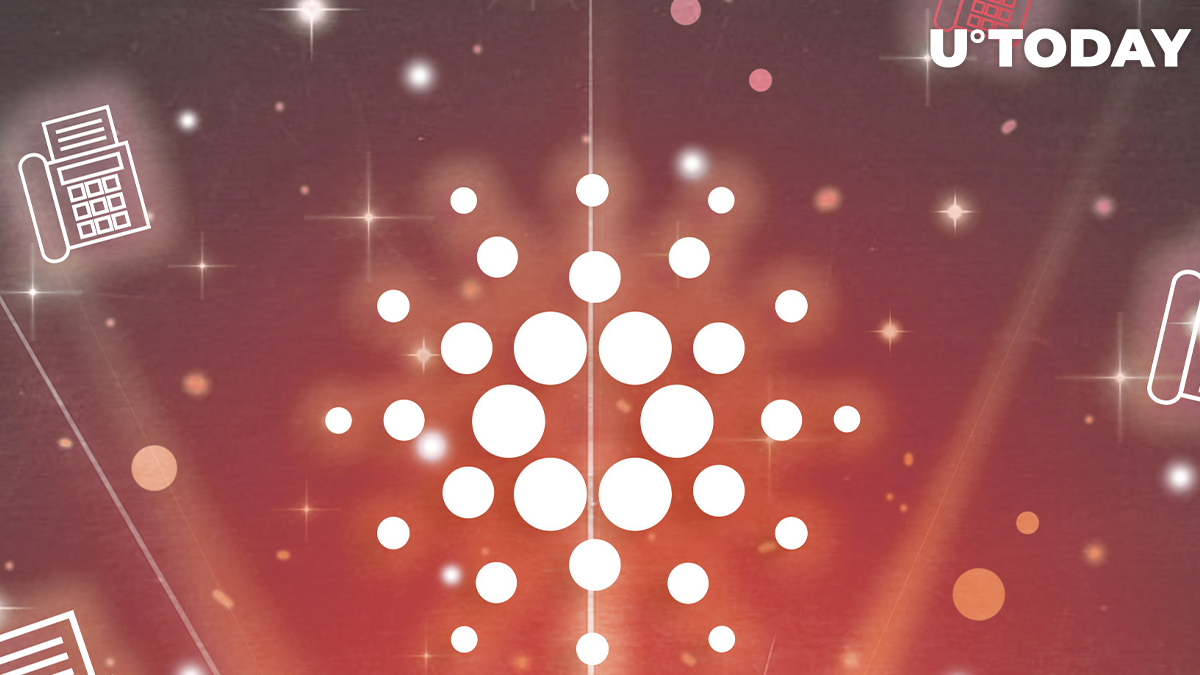 Cardano (ADA), the largest proof of stake (PoS) blockchain, will be empowered with smart contracts functionality on Sept. 12, 2021. As we are three weeks away from this crucial milestone, the moment has come to take a deep dive into what is going to change for Cardano (ADA) and the entire worldwide blockchain community.

In short, like the ETH1-ETH2 merge or EIP-1559 implementation for Ethereum, the smart contract launch is a once-in-a-lifetime event for Cardano (ADA) that can change its status in the blockchain world for good. What do we know so far?

Cardano (ADA) smart contracts release is going to be the most significant milestone since the introduction of public staking (July 31, 2020) and migration to complete decentralization (March 31, 2021).

Cardano (ADA) was first introduced by Charles Hoskinson, computer scientist and blockchain veteran, in 2015. The inaugural release was unveiled in 2017. Cardano (ADA) has no whitepaper: it adheres to proof-of-stake (PoS) principles as a resource-efficient and environment-friendly alternative to proof-of-work (PoW) systems like Bitcoin (BTC), Ethereum (ETH), and Monero (XMR).

In July 2020, with Shelley hadrfork activated through Cardano’s patented Hardfork Combinator, Cardano (ADA) introduced public staking: now its operations are secured by thousands of ADA holders delegating their tokens to different staking pools. In order to ensure fair distribution of staking processes and prevent the network from being whale-dominated, Cardano (ADA) developers introduced a number of eccentric techniques.

Since March 2021, IOHK-controlled staking mechanisms have depreciated: all of Cardano’s transactions are verified by community-driven pools. In mid-2021, Cardano (ADA) teams launched  a number of testnets for its Alonzo hardfork that is set to open a new era in Cardano (ADA) progress, i.e., smart contracts functionality.

What are smart contracts?

Smart contracts are small software programs intended to perform operations (execute, document or control some on-chain events) predetermined by this or that contract (agreement). Normally, smart contracts are intended to remove the third parties and middleware from the process of contracts execution in a manner that allows all participants in an agreement to be certain of its outcome.

Smart contracts are attractive for legal and financial operations due to their trustless nature and the opportunity to avoid enforcement costs and fraud losses.

Smart contracts were proposed in the early 1990s by Nick Szabo. In 2014, the idea of smart contracts implementation on blockchain was described in Ethereum’s whitepaper. By 2021, smart contracts are implemented by nearly all major blockchains: Ethereum (ETH), Tron (TRX), Eos (EOS) and so on; Binance Smart Chain (BSC) and Polygon Network (MATIC) are two fastest-growing ones.

Therefore, Cardano (ADA) is the latest cryptocurrency behemoth to implement smart contracts functionality. Its developers from IOG (IOHK) promote it as the most powerful, secure and resource-efficient smart contracts environment to date.

Just like Bitcoin (BTC), Cardano uses the unspent transaction output accounting model (UTXO). In general, it means that the outputs of one transaction immediately become the inputs of another one. At the same time, Cardano’s implementation of this design, Extended UTXO or EUTXO, allows far more complex data processes to go live on the blockchain.

EUTXO allows output addresses to contain complex logic to decide which transactions can unlock them and to add complex data to all outputs. In terms of practical usage, it allows Cardano (ADA) scripts to carry a state, i.e., to store and transfer more sophisticated data structures.

Also, with ETXO, the validity of the transactions can be checked off-chain before adding it to the next blocks. It prevents transactions from failing due to execution problems and allows the blockchain to empower systems addressing very complicated use cases.

The EUTXO model is implemented via Plutus Core, which is a scripting language used by Cardano (ADA). Actually, Plutus Core is similar to Huskell: the significant subset of Haskell can be utilized to write Plutus Core scripts.

But the authors of Cardano (ADA) smart contracts will not be required to write something in Plutus Core. There is a Haskell compiler plugin that creates Plutus Core programs. In turn, these scripts are executed by nodes while transaction validation is live on the blockchain. Then, the scripts lock UTXOs as either validator scripts or minting policies, controlling the process of minting and burning tokens.

In a nutshell, Cardano (ADA) dApp developers just need to write the code in Haskell to allow a special compiler to turn it into Plutus Core scripts.

Marlowe is a Cardano-specific language designed to attract developers with no previous expertise in blockchain and cryptocurrencies coding. It allows dApps teams to write financial designs in a financial language instead of a general-purpose programming language. It also analyzes the behavior of contracts before deploying them on-chain, so it eliminates the possibility of errors and “rug pulls.”

Cardano (ADA) newbies can experiment with designs written in Marlowe on a specific Marlowe Playground. Marlowe Playground can be launched in mainstream browsers; once the contract is ready, its devs can emulate the activity of its various participants.

Glow programming language is another eccentric novelty by the Cardano Community. First, it allows for the writing of entire dApps instead of isolated smart contracts. Glow generates a matching client code and a logical model of a new decentralized application. Thus, just like Marlowe, it lowers the entry barrier for developers interested in building on Cardano.

Proposed by Mutual Knowledge Systems (MuKn), a partner of the Cardano (ADA) ecosystem, this language allows the creation of dApps for many blockchains, so it is not a Cardano-specific programming instrument.

As the DeFi and NFT manias are nowhere near losing steam, Cardano (ADA) engineers and marketers are focused on creating the most developer-friendly environment for decentralized applications.

In Q1-Q2, 2021, the first-ever experimental products from the red-hot segments of non-fungible tokens (NFTs or digital collectibles) and decentralized finances shared their plans to launch on Cardano (ADA).

Namely, a first-ever DeFi ecosystem Occam.Fi (OCC) is going to bring all mainstream DeFi functions to the Cardano (ADA) ecosystem. Its inaugural releases will include a launchpad for initial exchange offerings, a decentralized cryptocurrency exchange module (DEX), a decentralized autonomous governance toolkit (DAO) and other DeFi-specific functions.

Cardano (ADA) already has a pioneering marketplace for non-fungible tokens (NFTs), THEOS. THEOS is incubated by the team behind Occam.Fi, the Occelerator. The THEOS project is focused on the goals of financial inclusion, sustainable development and fair economics.

To boost community activities, in August 2020, Input Output Global introduces a unique initiative, Project Catalyst. It is a combination of a DAO-governed blockchain development workshop and an incubator for early-stage teams.

Launched in Q3, 2020, out of stealth, this initiative onboards various Cardano-focused blockchain development teams. The best teams are chosen by a referendum of ADA holders; in the latest rounds, Cardanians can vote from their light wallets and browsers.

The most successful applicants are curated by Cardano’s developers: they receive consulting, expertise and marketing support together with lucrative ADA-denominated bonuses.

Related
Cardano (ADA) Opens Registration for Fund6 of Project Catalyst. Why Is This Important for the Ecosystem?

The largest Project Catalyst round, Fund6, is set to take place in September-November, 2021. The organizers expect more than 150 teams to show up while $4 million in ADA tokens are allocated for the winners of Fund6.

Cardano’s native assets: What is Djed?

Along with smart contracts functionality, Cardano (ADA) blockchain will receive its native assets. Unlike Ethereum with its ERC-20 tokens, all Cardano-based tokens will be issued “directly” on the blockchain, just like ADA coin. As covered by U.Today previously, Cardano’s Charles Hoskinson sees “thousands” of assets on the blockchain.

With the release of smart contracts, the Cardano (ADA) ecosystem will also be empowered with its own native stablecoin, Djed. Proposed by IOG, Emurgo and Ergo, this stablecoin will be algorithmically-backed: the minting and burning of new coins will be controlled by a purpose-made algorithm.

As such, all Djed’s crucial metrics are proven by mathematical theorems: price fluctuation limits, peg robustness, reserves protection and so on. Inaugural releases of Djed will be pegged to the U.S. Dollar price while the next iterations are associated with other world currencies.

As of Q3, 2021, experimental versions of Djed are deployed to the testnets of all major smart contracts platforms: Binance Smart Chain’s testnet, Avalanche’s Fuji, Polygon’s Mumbai, Ethereum’s Kovan, Ethereum’s Rinkeby and RSK’s testnet. As a result, the release of Djed on Cardano is in the cards.

Is everyone happy about Cardano’s smart contract release?

Just like every mainstream blockchain product, Cardano (ADA) has its own seasoned advocates and adamant critics.

Typically, Cardano (ADA) is criticised by those who doubt the development activity on its platform. For instance, prominent Bitcoin (BTC) bull, Digital Galaxy CEO Mike Novogratz - who is also the college roommate of ConsenSys co-founder Joseph Lubin - called Cardano (ADA) a “weird cult.”

He made headlines with a statement about “twenty of the smartest people...in the space” he spoke to. According to Mr. Novogratz, zero of them identified “traction” on Cardano.

At the same time, the IOHK CEO dismisses all of the accusations from his opponents. He frequently invited Cardano (ADA) critics to have a discussion, but they never answered.

Time to get a new group of people. pic.twitter.com/EU28XcuN1d

Asked about the status of the real-world adoption of Cardano (ADA) solutions, supporters of the project share the scheme with dozens of products that integrated Cardano (ADA) or plan to do so.

In September 2021, Cardano (ADA) will be empowered with smart contracts functionality. Over the past few months, its engineers (IOG, EMURGO, Cardano Foundation) created an attractive ecosystem for dApp development that includes Plutus Core, Marlowe, Glow and other interesting tools.

Cardano (ADA) nurtures a large and passionate community as its Project Catalyst incubated a number of powerful products.

Cardano’s (ADA) bumpy road to smart contract release is followed by an unparalleled ADA rally to $3 and unmatched hype on social media.