The Case for a Bullish Q4 Across the Cryptocurrency Markets

Darryn Pollock
There are history and charts and general optimism to go on, but there is also a good case for a bullish Q4 in the cryptocurrency markets 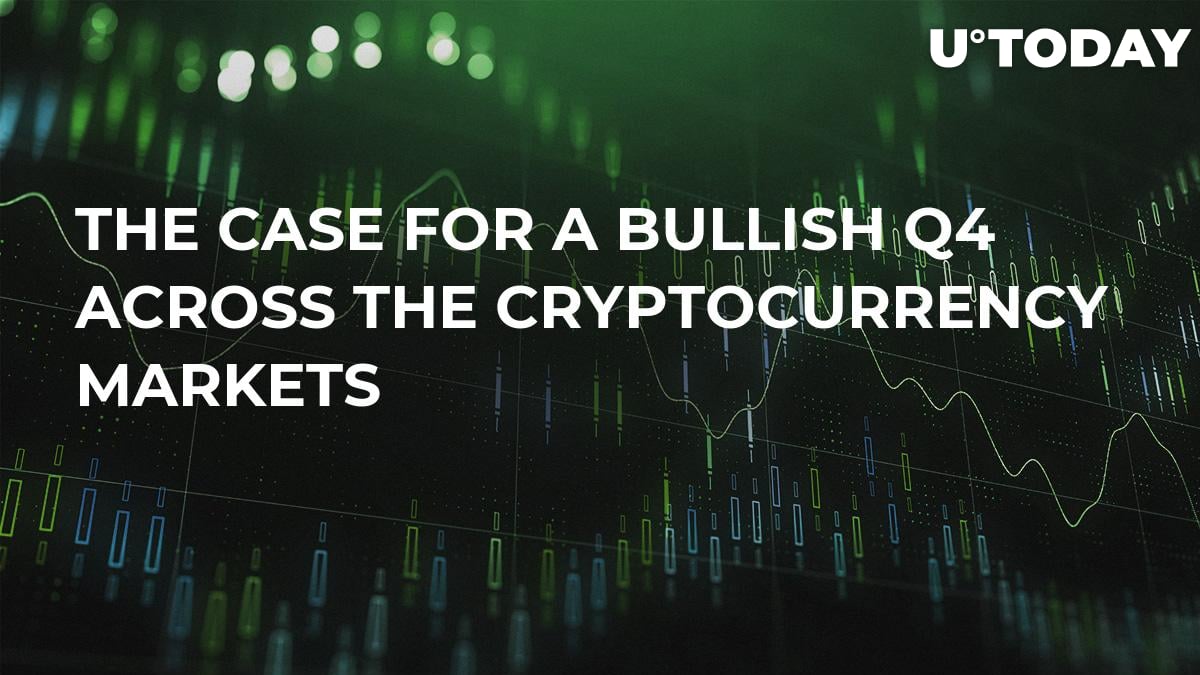 2018 has been a tough year for cryptocurrency enthusiasts, especially for those who joined at the conclusion of last year on the hopes that the massive rally would continue ever upwards. The market has been decidedly bearish as it has stripped a lot of its value.

However, the pessimism seems to have abated as many believe that Bitcoin, and as such the majority of the cryptocurrency market, has reached its bottom. Thus, the belief is the only way for Bitcoin now has to be up.

This belief is also being strengthened by other factors in and around the cryptocurrency market which could well lead to a Bullish Q4 for the digital currencies. Things such as potential regulatory approvals, oncoming global market war can lead to smaller but still meaningful advancements.

Google has lifted its ad ban, Coinbase is expanding its offerings, ICE’s Bakkt is launching soon, and even history puts Q4 in a good light.

There is a host of good news approaching the cryptocurrency market in Q4 that could help catalyze a resurgence in the price of cryptocurrencies across the market. It has often been seen that a positive piece of news has a big effect on an upward trend.

Some of the things which could lead to a stronger and more engaging cryptocurrency market include things like Ripple’s xRapid product. The XRP token is often shunned by the purist cryptocurrency fans as it has a centralized nature, but the manner in which the space is heading dictates that a level of compliance is needed, as well as solutions for banks and other institutionalized entities.

Ripple hits these notes and could well be the starting point for an uptake in institutionalized interest for Bitcoin and other cryptocurrencies.

Furthermore, Bakkt will provide a Bitcoin Future’s platform that also serves as an all-in-one consumer marketplace to buy, sell and store cryptocurrencies. Microsoft and Starbucks are supporting this endeavor and Bakkt could help crypto become mainstream.

But still, the biggest piece of institutionalized news that both sides of the equation are waiting on is the possibility of a Bitcoin ETF. The SolidX ETF could very much catapult the market to a new stratosphere. The next decision date deadline is Dec. 29, 2018, but the SEC can issue a delay into February 2019.

Still an issue of volume

But, despite all the positive news, the real underlying issue for Bitcoin’s price and growth has to be its low volume. Any news that has come Bitcoin’s way recently, that in the past would send it rallying, has quickly died down because of lack of trading volume.

Naeem Aslam, Chief Market Analyst at ThinkMarkets, explains that the biggest thing lacking for Bitcoin to break through some real levels of resistance is participation from its community.

“As it has been the case recently, Bitcoin’s upward momentum is lacking one critical element: participation from the wider community. Remember, last year’s move towards $20,000 was supported by the retail client. It was the masses going crazy about the cryptocurrency thinking that buying Bitcoin is the shortcut to acquire the Lambo they always wanted,” he said.

“No matter which exchange you look at, there is one common theme: no volume. A lot of questions are being raised in regards to the opening of new accounts at various different exchanges and the key problem continues to be the lack of a reliable third-party auditor.”

So, as Aslam explains, the cryptocurrency market needs an influx of new money and participation, and for him and foe many others, that will potentially come if an ETF is granted by the SEC.

“Bitcoin needs some sort of a blessing to revitalize the rally. This could come in the form of an ETF approval from the U.S. Securities Exchange Commission (SEC). To date, the SEC has rejected nearly nine applications in this space. But there is still hope. The department has invited parties and public people to share their views on Bitcoin ETFs. The date set for this is Oct. 26, 2018,” Aslam added.