Top 10 Reasons Why Bitcoin Is Falling Down

Alex Dovbnya
When Lambo? U.Today has determined the top 10 reasons why Bitcoin is in a freefall, and why Lambo bros could be one of these reasons behind the crash 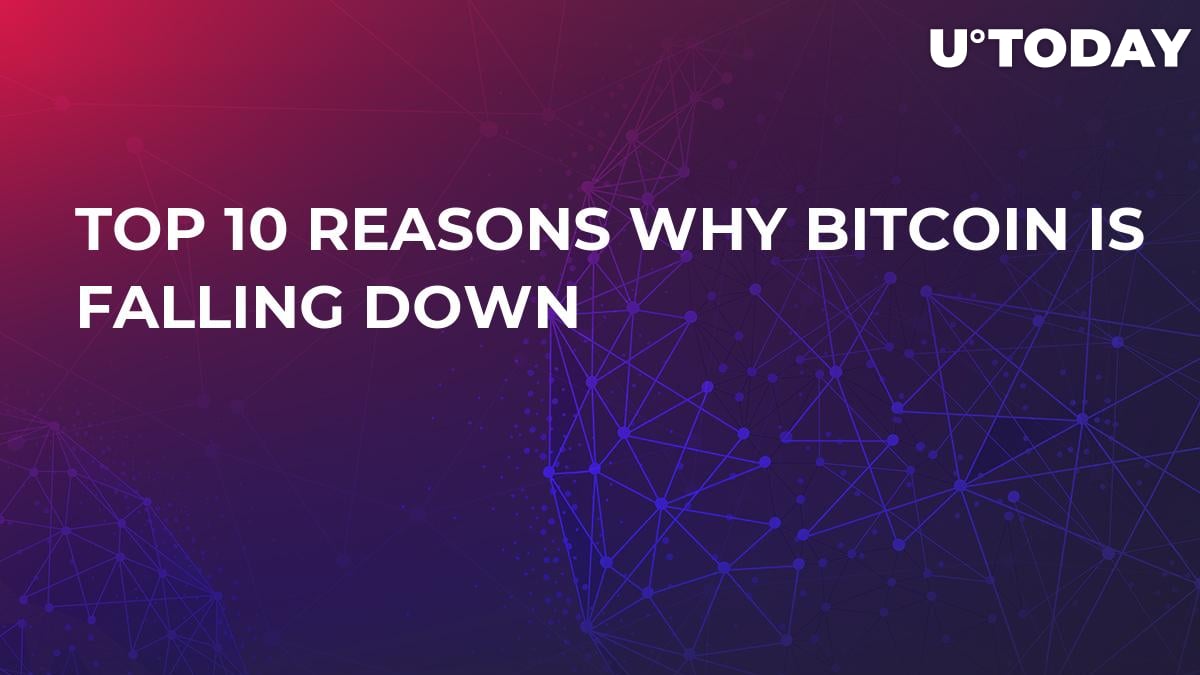 Bitcoin (BTC), despite recently surging by 10 percent, still remains in the doldrums with its price being nearly 75 percent below last year’s ATH. On Nov. 25, Bitcoin recorded a 36 percent weekly drop (the second worst in its entire ten-year history).

Numerous theories are floating around the infamous Bitcoin crash. U.Today has picked up some of the most relevant ones.

The frontloaded success of cryptocurrency mining

During Bitcoin’s early days, your ordinary computer would be suitable for mining Bitcoin, but then it turned into a massive international business with full-fledged mining farms and ASIC manufacturers engaging in a fiery competition with each other.

Eventually, the Bitcoin mining craze reached its boiling point in the first half of 2018 when profitability started to decline due to a double-whammy of falling prices and increasing cryptocurrency mining difficulty. AMD and Nvidia are ditching the then-lucrative business niche while miners are selling off their Bitcoins in droves to cover their losses.

The regulatory uncertainty around Bitcoin remains one of the main factors that hinder its growth. Many suggested that the SEC’s crackdown on two ICOs triggered a prolonging bearish trend that finally broke Bitcoin’s multi-week streak of stability. During his recent interview, Circle CEO Jeremy Allaire said that there is a need for more regulatory clarity when it comes to distinguishing between securities and commodities in the cryptocurrency market.

According to Oxford Capital, the unprecedented rise of Bitcoin was largely fueled by the populist movement. During their Thanksgiving dinners, numerous people would hear mesmerizing stories about how much money you can make in a snap because of the volatile asset class. Once the Bitcoin price started freefalling, the new investors found themselves in a panic mode, and the cryptocurrency massive sell-off intensified. Nevertheless, the number of ID-verified users has almost doubled in the market this year (from 18 to 35 mln).

Numerous technical indicators point to the fact that Bitcoin is massively oversold (after being equally overbought last December). That essentially means that the real market value of the flagship cryptocurrency is much higher, and the Bitcoin price could rise in the nearest future.

Speaking of cryptocurrency’s nouveau riche, it is worth mentioning that just over 1,600 investors (commonly known as ‘cryptocurrency whales’) control almost a third of the whole cryptocurrency market. Hence, these powerful industry players can easily tip the scale in order to manipulate the price of Bitcoin.

For instance, they have the power to tank Bitcoin price by fabricating a sell-off. Shortly after that, Bitcoin becomes a powder keg waiting to explode since many FUD-driven investors are to most likely follow suit.

The launch of CBOE and CBF Bitcoin futures became the driving factor behind Bitcoin’s bull run. There were high hopes that institutional investors would dive into the nascent industry but that wasn’t the case. Back in July, the Bitcoin price experienced a short-term pullback when there was mounting anticipation for the Bitcoin ETF approval. However, the Winklevoss brothers failed to get the green light from the SEC to launch their Bitcoin ETF.

However, the good thing about 2018 is that major institutional players in the likes of Fidelity are finally tossing their hats into the cryptocurrency ring. Earlier, Wall Street permabull Mike Novogratz predicted that 2019 will be the year of institutional money falling right into Bitcoin’s lap. Goldman Sachs and Coinbase already offer custody solutions for Bitcoin investors.

Bakkt, the ICE-backed cryptocurrency exchange, is expected to launch its Bitcoin futures product on Jan. 24, 2019, which is supposed to be an icebreaker when it comes to institutional involvement.

The ‘Blockchain over Bitcoin’ narrative

Mainstream media outlets have seemingly adopted a narrative that only Blockchain, the disruptive technology that made its debut in Satoshi’s white paper, will survive. Bitcoin is a mirage, bubble, scam, rat poison squared – you name it (the same goes for other top cryptocurrencies).

While Blockchain technology is also going through its ‘growing pains’ stage, it already has plenty of real-life use cases that are changing the face of multibillion-dollar industries, including:

Bitcoin failed to break into the mainstream as a viable replacement for fiat money, and the lack of real-life adoption is very discouraging for those who want to invest in the currency.

This November, Bitcoin’s crash coincided with the equity crash (which marked the end of a ten-year-long bull run). That gave ground to plenty of gloomy predictions about the looming economic crisis. Earlier, U.Today reported about an increasing correlation between Bitcoin and stocks – these two markets move in tandem, at least in the short-term.

Lastly, there is also a theory that US investors could be simply avoiding paying capital gain taxes. Those who made mammoth-sized profits in 2017 when Bitcoin reached its ATH went on a sell-off spree before filing their April taxes the next year. The situation is quite absurd: Bitcoin investors might not have enough coins to pay taxes for 2017 in the middle of the cryptocurrency winter. It has been estimated that cryptocurrency investors could owe the IRS as much as $25 bln.

Lastly, Clovr research shows that mainstream media outlets typically cover Bitcoin more when the price goes up. For instance, Bitcoin reached its media peak during its sudden downfall right after reaching the ATH of almost $20,000. There was a spike in coverage during every Bitcoin drop that followed, which means that mainstream news sites profit from amplifying the FUD. Notably, conservative outlets have the highest negative to positive ratio, with 88.7 percent of all pieces putting Bitcoin’s worst days in the limelight.

Will the BTC price recover?

Bitcoin’s price has been falling steadily since reaching its December peak, and some experts predict that this negative trend will most probably continue well into 2019. For instance, Bloomberg’s Mike McGlone believes that the king of cryptocurrencies could reach its bottom at the $1,500.

Nevertheless, despite the dramatic rout, Bitcoin remains the best performing asset of the last five years, trumping stocks, bonds, and fiat currencies. As the market is maturing, there is a good reason to believe that Bitcoin is far from being dead, and people’s expectations are simply too high.