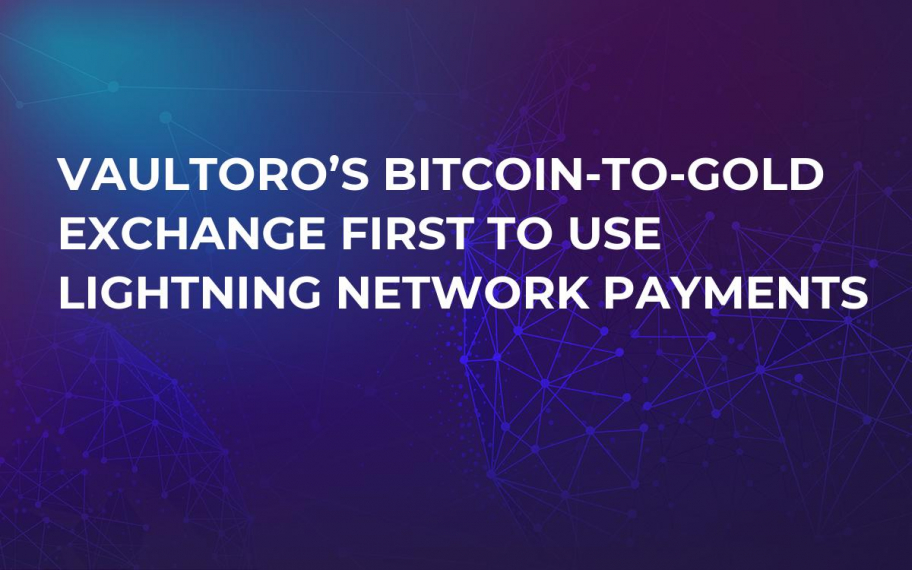 Vaultoro, the world’s first crypto-to-physical-gold exchange announced it has implemented the much awaited Lightning Network as an instant deposit method on its exchange.

Traders at Vaultoro can now deposit Bitcoin instantly, and free of cost. They can send and take orders without the need of trusting Vaultoro’s hot wallet, the company stated in its blog post earlier Friday.

The Lightning Network is heralded to be a groundbreaking solution to the scaling problems in cryptocurrency and is capable of increasing transaction capacity from millions to billions, experts say.

The Lightning Network creates a layer on top of Bitcoin to enable fast and cheap transaction on its Blockchain. The network works by supporting user-generated channels that are capable of sending secure payments back and forth without broadcasting them to the whole network. Once the transaction is complete, only the balance is registered on the Blockchain, enabling more transactions to occur in less time.

Joshua Scigala, CEO of Vaultoro says in an interview with Bitcoin Magazine:

“Lightning makes Bitcoin so fast that if you want to buy an order out of Vaultoro’s order book, you can hold the Bitcoin in a wallet on your phone, set the order on Vaultoro, get a QR code and send the Bitcoins through the Lightning Network, directly purchasing the order.”

Using the Lightning Network substantially reduces the risk associated with Bitcoins sitting in hot wallets while trades are made, the company says.

Currently, the Lightning Network is supported only through the Android wallet Eclair.  For customers to use the network, they would need to install the Eclair wallet and send Bitcoin to it and then open a Lightning channel to send transactions instantaneously.

The company warned that Lightning is still in beta phase and users should employ it at their own risk.

“Bitcoin is one of the greatest peaceful revolutions the world has ever seen. Because it’s voluntarily bringing people back to asset-based money and giving them a way out of controlled debt-based fiat currency.  Many won’t understand this important difference, but it doesn’t matter as they will come in due to mad gains in the speculative markets or basic borderless utility.”

Vaultoro was one of the first companies to allow customers to trade gold with Bitcoin directly.

Vaultoro’s customers can hold gold asset for seconds or years, with their ownership certificate securely stored on the Blockchain.