The Biggest Crypto Crimes and Fiascos to Date: Our Top 10 List 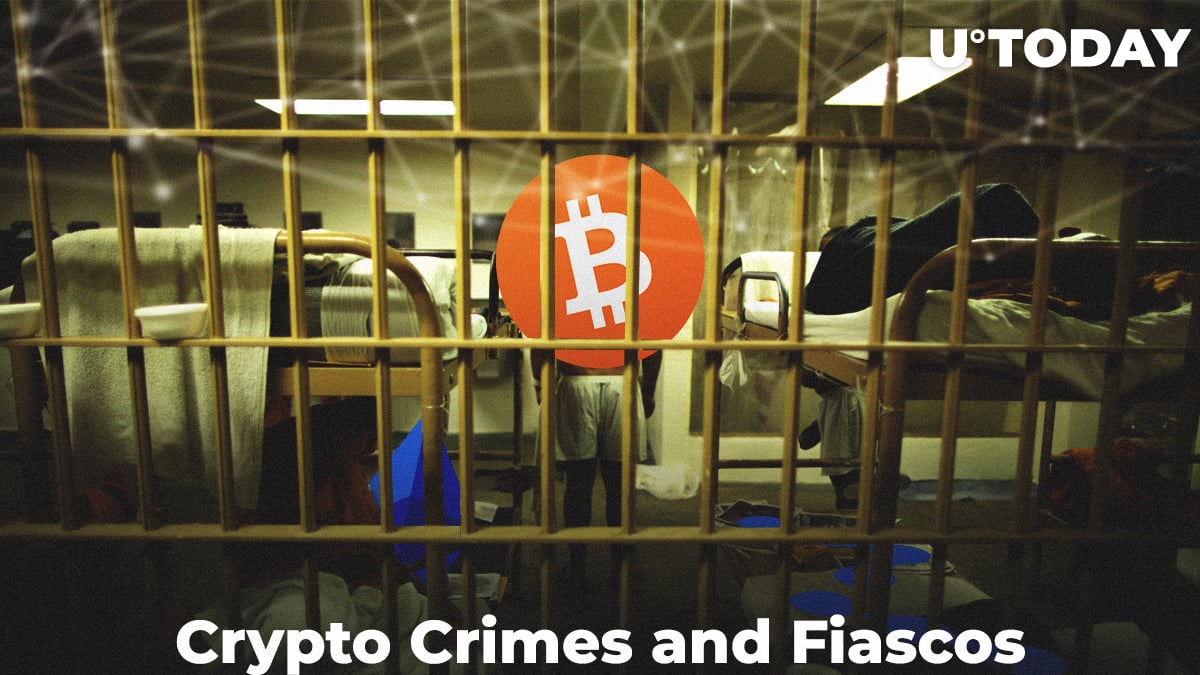 In the times of the ongoing crypto-economic crisis―to remind ourselves that we have seen far worse―we bring you our top 10 list of the most notorious crimes and failures of the crypto world to this day: 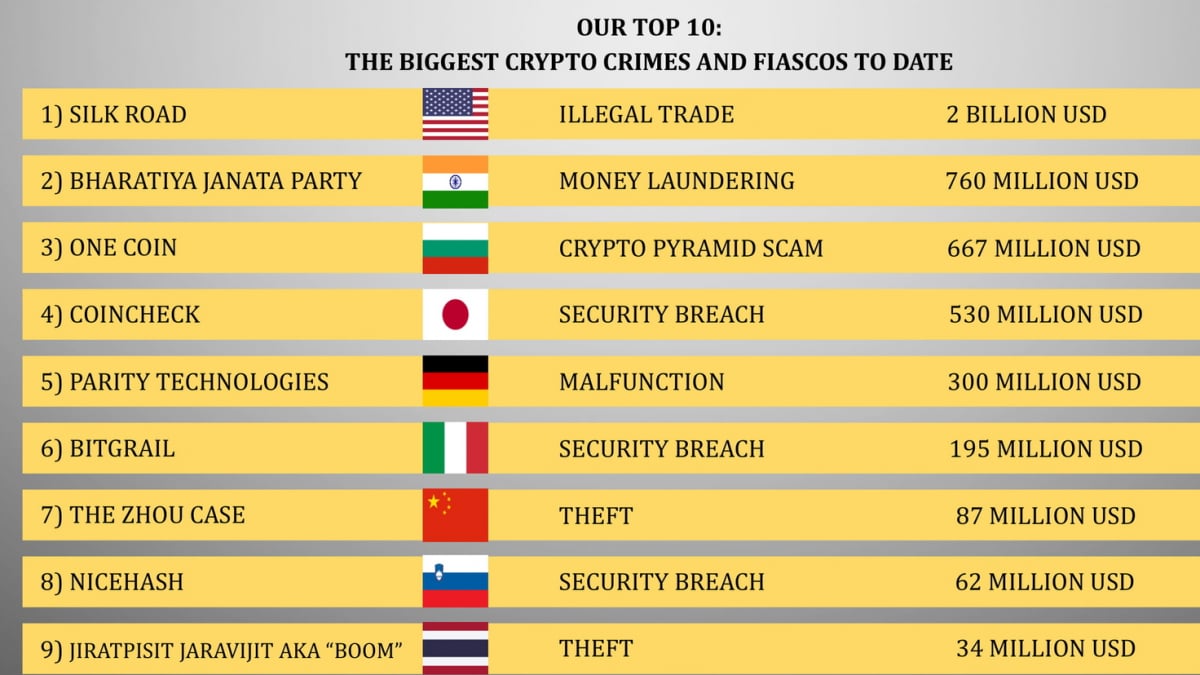 In tenth place is our good old friend Charlie Shrem who just keeps on going. Charlie already served time back in 2014 for making his Bitinstant crypto payment system available to drug dealers on the Dark Web.

Now, he is being sued by the Winklevoss Twins for not ever giving back their share of Bitcoins, equivalent to 32 million USD at the time of the lawsuit, which could be classified as a form of embezzlement. Whether Charlie is proven guilty or innocent remains to be seen.

In ninth place is the famous Thai actor Jiratpisit Jaravijit, known by his stage name Boom, which is all too appropriate for having caused a major media boom earlier this year when he was arrested for stealing 34 million USD worth of Bitcoin from a young Finnish investor.

After an initial introduction on the web, the Finnish man was taken to a casino in Macau and offered to invest in the hot new Dragon Coin. When he did just that, the scammers led by Jiratpisit Jaravijit disappeared without a trace, but fortunately, were eventually located and apprehended.

In eighth place is NiceHash, one of the largest crypto mining platforms in the world, based in Slovenia, a former constituent of the Socialist Republic of Yugoslavia. NiceHash came under a cyber attack in December 2017 as the Bitcoin bubble was in full force. Close to 5000 Bitcoins were stolen as a result of well-orchestrated security breach causing the website around 62 million USD.

Amazingly, while NiceHash’s reputation was indeed hurt, the platform is still operating today and considered by many to be one of the most reputable mining companies around.

In seventh place is the Zhou case from China. In the summer of this year, Chinese law enforcement officials arrested a group of IT specialists based in the Shaanxi province in Central China who used remote cyber-hijacking techniques to gain control of computers at several unnamed Internet companies.

The criminals, led by Zhou, managed to steal 87 million USD worth of digital currency, which is considered to be the biggest ever crypto theft, and all that, mind you, despite the Chinese government’s ongoing crypto ban.

In sixth place is the Italian company Bitgrail whose servers supposedly suffered a major security breach in February of this year. During the crypto siege, hackers stole 17 million Nano tokens, which at the time of the incident was equivalent to 195 million USD.

The news went from terrible to yet more scandalous when it was later reported that the founder, Francesco Firano, might have simulated the attack in order to cover unlawful withdrawals from the clients’ wallets from the previous year. The investigation is still going on with the investors suing the company and Bitgrail’s crypto wallets having been confiscated by the Italian police.

In fifth place is Parity Technologies based in Germany with offices in the UK. In perhaps the biggest epic fail of the crypto world known to date, Parity lost 300 million USD worth of Ether when one user accidentally became the owner of all of Parity’s multi-signature wallets last year.

Parity had been fixing their system in order to fight off repeated cyber threats from hackers; however, this backfired a millionfold by leaving a bug in their system that led to the peculiar situation of one client having gained ownership of other clients’ funds, which the client then proceeded to move around.

Whilst trying to set things right in a panic, the user, “devops199”, destroyed the transfer code, which unwittingly locked all of the funds in wallets with no possibility of access. Parity is said to be working on resolving the issue, currently to no visible result. Hard fork type solutions and alternate routes have been suggested, but Ethereum has not been very supportive in going along.

In fourth place is Coincheck, based in Japan, with the biggest reported cyber security breach known to date, also (quite alarmingly) from earlier this year. In January, during a well-executed attack, the hackers stole 523 million NEM coins from the exchange platform, which at the time of the accident were worth approximately 530 million USD, leading the company’s shocked president to call it “the biggest theft in the history of the world”.

The Japanese firm showed full compliance with the local law by opening its doors to inspections and promising to refund their clients. In April, Monex Group, which specializes in traditional finance, saw an opportunity in the wounded crypto giant and bought Coincheck. Impressively, the platform lives on with plans to enter the American market.

In third place is One Coin, a by now well-known crypto pyramid, the biggest Ponzi scheme case of the crypto world. The scam started back in 2015 in Bulgaria by Ruja Ignatova with her accomplices and spread to other regions, as is the case with any pyramid. The gist of it was this: learn how to crypto-trade with us and support our cryptocurrency, One Coin; invest in it and thus in the future, use the means we provide to mine it.

None of it went anywhere, of course, except that the brains behind the operation collected huge sums of money. While the full extent of the scam is yet to be determined, federal prosecutors in the US made arrests and charged the perpetrators with a 400 million dollar financial crime; the prosecutors in China arrested yet more scammers in their country and gave the figure of 267 million USD, taking the total damage to 667 million USD. So far.

In second place is India’s very own Bharatiya Janata Party, which in July of this year  was accused of money laundering using Bitcoin by no less than the Indian Congress itself. The accusation pertaining to the party’s questionable activities from the previous year was publicly presented by Shaktisinh Gohil, a spokesperson for the All India Congress Committee, who claimed that Bitcoin had been used to convert the party’s “black money into white”.

In a country riddled with corruption, an accusation of money laundering was nothing new; what was new though is that Bitcoin had been made the instrument. That, plus the amount of black money allegedly converted into Bitcoin, a whopping 760 million USD. India’s Supreme Court has since been called upon to launch a formal judicial inquiry, but the outcome remains uncertain.

And finally, in first place is Silk Road and its creator Ross Ulbricht, the mastermind behind the infamous platform responsible for popularizing Bitcoin ― back then still a new phenomenon ― for the purposes of decentralized trade on the Dark Web, mainly of illicit substances and firearms.

In 2013, Ulbricht was apprehended by the FBI and later charged with computer hacking, money laundering, and drug trafficking. His Bitcoins were seized and taken to the US Marshals Office, which held a public auction and sold them off to multiple buyers, among them Timothy Draper and Barry Silbert.

While Ulbricht is serving a double life sentence in Colorado’s Florence High Penitentiary, it must be painful for him to realize that his 144 000 Bitcoins would have been worth a staggering 2 billion USD at the time of his final appeal.