Valeria Blokhina
Read the top crypto news stories over the past weekend in U.Today’s news digest! 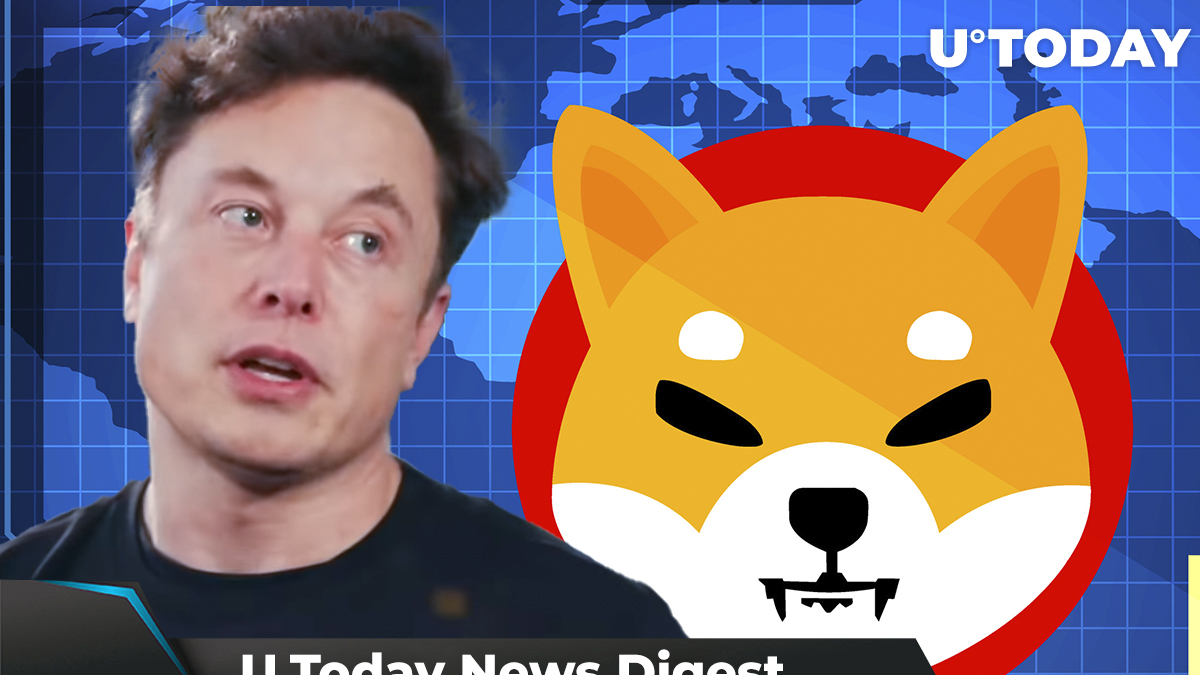 The past weekend has been rich in crypto news. Check out U.Today’s latest news digest and see for yourself!

Elon Musk says he will become the first DOGE trillionaire

According to the Bloomberg Billionaires Index, Elon Musk’s net worth has now reached $249 billion, bringing him close to surpassing the gross domestic product of Portugal. The Tesla CEO believes that he will become the world's first Dogecoin trillionaire. The reason behind Musk’s wealth increase is the renewed Tesla rally; last Friday, shares of the leading e-car manufacturing company hit a new all-time high of $910.

Sunday turned out to be an outstanding day for the Shiba Inu community. The canine meme coin inspired by the Shiba Inu dog has logged a new all-time high for the first time since May 11, reaching $0.00003940. According to CoinMarketCap data, Shiba Inu has become the most-traded cryptocurrency on Coinbase.

SHIB did not stop there: later that day, its trading volume surpassed that of Ether, hitting $14.5 billion. At the moment, Shiba Inu is the third-most-traded cryptocurrency overall (behind only Tether and Bitcoin).

Robinhood adds SHIB to its survey on clients’ crypto choices

Despite dodging direct questions about listing Shiba Inu, Robinhood might be looking into adding support for the meme cryptocurrency in the near future. The popular trading app is conducting a survey on their customers’ preferences regarding crypto.The list of options participants can choose from includes Cardano, XRP, meme-crypto DOGE and Shiba Inu. The community expects Robinhood to add support for trading SHIB soon, hoping that this would bring the SHIB price up to at least $0.01.

JPMorgan has a bearish warning about Dogecoin and Robinhood

According to a Friday note by JPMorgan analyst Kenneth Worthington, weak Dogecoin volumes are the key reason for Robinhood’s vulnerability. The meme cryptocurrency accounted for 62% of the firm’s crypto-related revenue in Q2. Worthington writes that, unlike cryptocurrency-focused trading platforms, Robinhood failed to record an upsurge in trading volumes this October. Dogecoin is up only a modest 15% this month, significantly underperforming its canine rival, Shiba Inu.

Cryptocurrency tracker Watcher.Guru reported that on Sunday almost 900 million SHIB tokens have been burned. Shiba Inu’s price reacted by moving up by 16% in addition to extremely positive market sentiment. Despite having relatively low burn rates compared to the market capitalization of the meme-token, a significant amount of SHIB has already been burned thanks to Ethereum's leading developer, Vitalik Buterin.The amount of previously burned SHIB remains at 500 trillion.