Blockchained China: Ban or No Ban, the Crypto Sun is Refusing to Set

Alexander Goborov
While China has indeed imposed a ban on ICOs and crypto exchanges, its relationship with the Blockchain is far from over 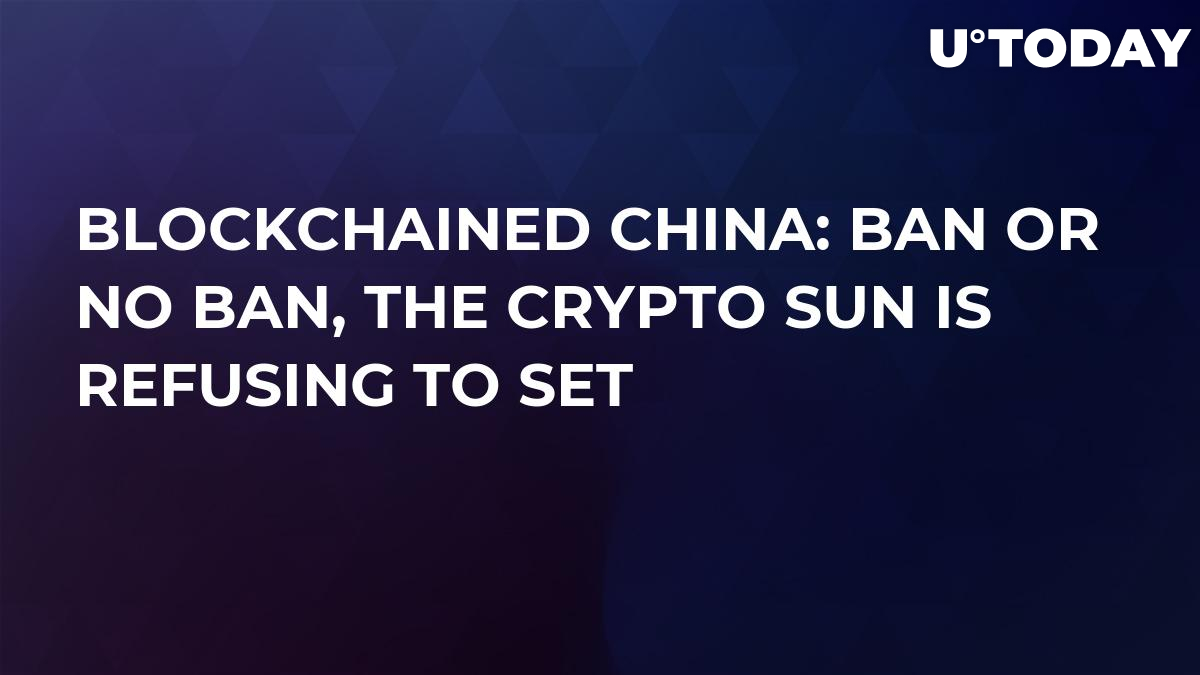 With the population of 1.4 billion people, the largest of any in the world, and GDP of 12.5 trillion USD, China is, without doubt, one of the major global players. Nevertheless, there have been talks about the Chinese government’s unwillingness to accept the many benefits of the Blockchain technology, which culminated in China’s official crypto ban last year.

Does it mean that China’s romance with the Blockchain is bound to wither? The answer is not even close: this is a gross misreading of what has been actually happening.

China banned ICOs in September of last year and soon after outlawed all cryptocurrency exchange platforms. Incidentally, that did not stop the price of Bitcoin from skyrocketing, but it did make many think that it would be China’s Blockchain finale.

As a matter of fact, this is not what the Chinese government had in mind. Their goal was not to prohibit Blockchain per se, but rather to combat ICO fraud which was ubiquitous on the mainland. Paradoxically enough, China is making a centralized effort to develop a decentralized phenomenon; after all, the Blockchain technology did make a mainstage appearance in China’s 13th Five-Year Plan for IT Development in December 2016.

In addition, the chairman of People’s Bank of China (China’s central bank), Zhou Xiaochuan, said earlier this year that digital currencies were, in fact, an inevitability, including those backed by nation-states, giving his reasons for the imposed ICO ban:

“For Blockchain projects with technological potentials, they should conduct thorough testing before rolling out services. Otherwise, a reckless expansion may incur serious security and financial stability issues.”

The fact that the Chinese government acted decisively to fight fraud and instability (which was to be expected) by pushing the ban on ICOs and crypto exchanges does not mean that China’s relationship with the Blockchain is finished. Not by a mile.

Lest we forget that, to this day, three of the major crypto exchanges are de facto Chinese. The giants HitBTC and Bitfinex are based in Hong Kong. Sure, Hong Kong is not mainland China, so a different set of rules applies; however, it still is an administrative region of People’s Republic of China and has been since Hong Kong’s transfer from the UK in 1997. Most definitely, the Chinese government were well aware of what this ban would (or rather, would not) mean for Hong Kong’s crypto industry when they finally put their foot down.

Another huge player in the game is Binance, the world’s largest cryptocurrency exchange by trading volume, whose founder Changpeng Zhao is Chinese. Binance started out in Shanghai and later moved to Japan to avoid the ban, but it wouldn’t be unreasonable to assume that both the company and the Chinese government were well aware of each other intentions, well in advance. It is also quite possible (and even probable) that Binance maintains some ties with China to this day, since the company’s predecessor, Fusion Systems, is still operating from within China.

Related
Number of Coins and Tokens Listed on Exchange Platforms: HITBTC Has the Most

Crucially, according to the most recent statistics by Datalight, today 56% of all patents in the world related to the Blockchain come from China. Furthermore, this year 47% of all attracted venture capital globally has also been Chinese. The month of January alone saw over 100 million USD in Blockchain-related projects in China.

Evidently, China’s affair with the Blockchain is not going anywhere; instead, the government wants to turn China into a global centre of innovation by adopting the Blockchain technology at the national level, including state commerce, government, and academia, as opposed to letting the ICO scammers roam free.

It has also been reported that China is extending its hand to Venezuela in their support of the latter one’s switch to the state-backed cryptocurrency, the petro, and DLT. This, too, must be indicative of something.

In May of this year, China’s president, Xi Jinping, made it clear what direction the country is set to take in relation to the Blockchain, having declared:

Ban or no ban on ICOs and crypto speculators, it appears as though China is planning to make good use of what the Blockchain technology has to offer, and it has proceeded to do so already.