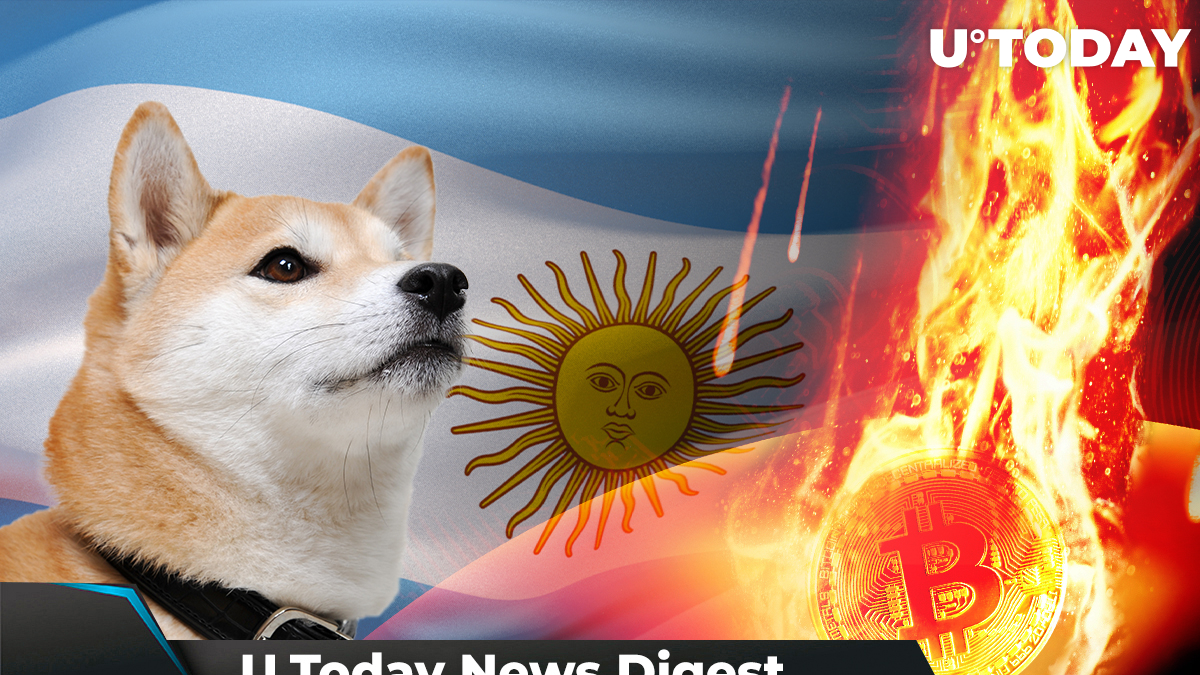 U.Today has prepared a list of selected news summaries with the latest crypto events. Don’t miss anything happening in the industry!

Yesterday, users of Binance’s U.S. exchange witnessed a sharp drop of the Bitcoin price to the $8,200 level. This left traders dumbfounded, even though the flagship cryptocurrency recovered within seconds. The abnormal Bitcoin plunge also took place on the Kraken exchange, where Bitcoin briefly dropped to the $54,000 level.

Later that day, Binance U.S. suggested the reason behind the extreme volatility that occurred on the exchange, claiming that the price drop was attributed to a vulnerability in the trading algorithm of one of its institutional clients.

Shiba Inu is accepted by an Argentine real estate agency

Shiba Inu’s popularity among small merchants is spreading across the globe. Yesterday, an Argentine real estate agency in Santa Clara del Mar, dubbed Candoli Propiedades, announced that its customers can now pay with SHIB when buying or renting properties. Later that day, El Corte Mágico, a Spanish shop that sells fresh fruit and vegetables, also added support for the meme cryptocurrency. This spike in merchant acceptance is attributed to Shiba Inu’s massive rally that occurred earlier this month.

Elon Musk’s followers have long noticed that the number 69 appears to hold some special significance for him. Last October, the billionaire changed the price of the Tesla Model S to $69,420. Thus, he could not but post another corny joke with this number. On his Twitter account, Musk shared a picture with a couple cuddling in their bed and looking at the prices of Bitcoin and Ether, $69,000 and $4,200, respectively. The crypto community has no doubt that it can expect more 69-related jokes from the eccentric entrepreneur.

Binance CEO Changpeng Zhao has announced that the exchange’s daily volume hit an eye-popping $100 billion in just one day. Binance achieved this crucial milestone on the day Bitcoin hit a new all-time high of $67,276. According to data provided by CoinMarketCap, the trading platform remains a strong leader in both spot and derivatives trading. Earlier this month, it announced a $1 billion ecosystem fund.

Brad Garlinghouse: Ethereum surpassed XRP because of the SEC

While speaking at the DC Fintech Week virtual conference, Ripple CEO Brad Garlinghouse opined that Ethereum has managed to outperform XRP thanks to the regulatory clarity the second-biggest crypto received from the SEC. He added that market forces should determine winners and losers, not regulators.

In December 2017, XRP became the second-largest crypto, but it has since slipped to seventh place. Ether is now firmly in second place, with its market cap higher than that of JPMorgan.