Alex Dovbnya
Florida-based yacht dealer starts to sell high-end yachts with Bitcoin. While cryptocurrencies could be inefficient in settling $1 micropayments, they are effective in settling sums. 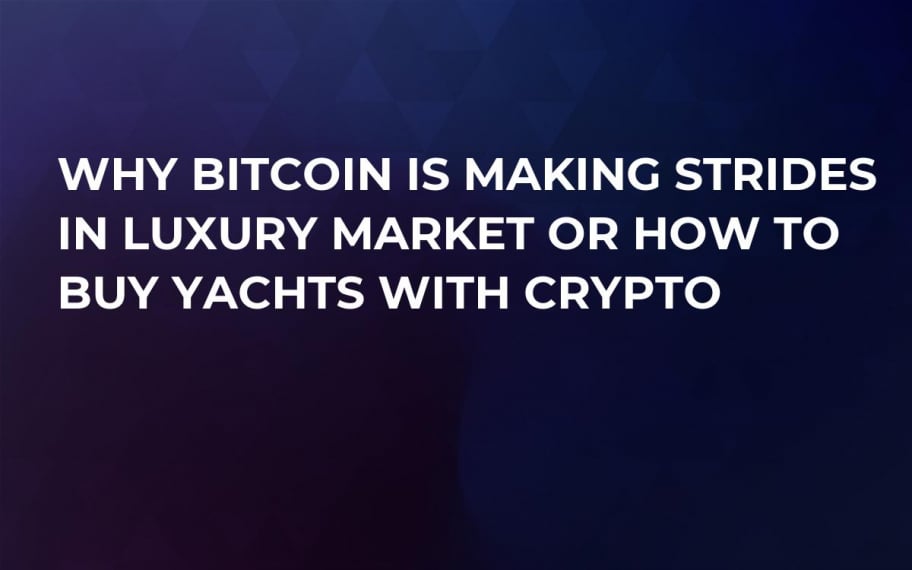 This week, Florida-based yacht dealer Denison Yachting told CNBC in an interview that the company has started to sell high-end yachts with Bitcoin and other cryptocurrencies including Bitcoin Cash, Ethereum and Tron.

Bob Denison, the founder of Denison Yachting, stated that the company has decided to accept cryptocurrencies as a payment method to offer its clients an alternative way to purchase yachts at the Miami International Boat Show.

Denison emphasized that the company also wanted to ease the process of settling large payments, as it can be burdensome for clients to settle multi-million dollar payments through banks and other strictly regulated channels.

"It is our job as the dealer or broker to make purchases as easy as possible. So for us, this is just another effort to come to where the client is. Sometimes my friends on the dock act like this is a marketing gimmick, but we've actually gotten results from it and I truly believe in it.”

On the Bitcoin network, for instance, users can send $100 or $1 mln with the same transaction fee, as the fee does not depend on the amount of the transaction but rather the size of the payment, which relies on the number of inputs and outputs stored in the transaction.

Through banks and financial institutions, multi-million dollar transaction can cost tens of thousands of dollars in fees.

Denison added that as more brokerages, businesses, and retails begin accepting Bitcoin and alternative cryptocurrencies, the risk in using cryptocurrencies due to their high volatility will inevitably decrease.

"Inherently there would be a little bit of a risk, but I truly believe in the future of cryptocurrency and I truly believe it will stabilize. The more [transactions like this] happen, the less crazy it will sound."

In August 2017, Garrick Hileman, an economic historian at the University of Cambridge and the London School of Economics, stated that the popularity of Bitcoin has drastically increased in the luxury market, due to its ability to process large payments with low fees and fast verification periods. Hileman stated that consumers have started to use the dominant cryptocurrency to purchase items worth many thousands of dollars, instead of banking services.

"If you're only paying a $2 transaction fee on a piece of art that's worth tens of thousands, the fee is basically zero. But if you're paying two or three percent on a piece of art of that value, then the numbers can go up quite a bit,” said Hileman.

Real estate firms in the UK, Dubai and Tokyo have also begun to sell properties in the range of $100,000 to $300 mln in Bitcoin, to provide buyers with convenient methods of payment that can be used to seamlessly transfer large sums of money.

"So I see it coming to that stage where the early adopters are giving way to a more mainstream application of cryptocurrency, and therefore it's a logical extension to take land and buildings and effectively offer people the opportunity to pay in cryptocurrency or Bitcoin rather than just fiat currency."