Darryn Pollock
Vietnam was a country that strongly looked to embrace Blockchain and Bitcoin, but its recent crackdown has left Blockchain innovation out in the cold 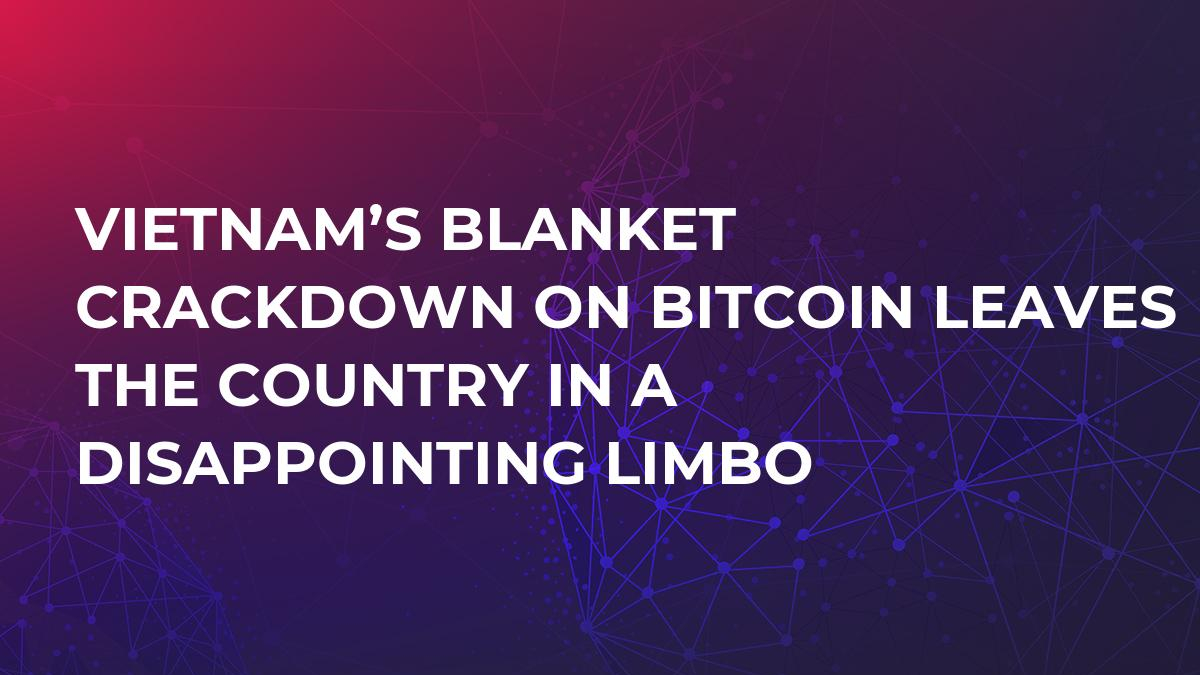 Vietnam, like many countries, especially in Asia, is struggling from a lack of a balanced legal framework to outline the manner in which Bitcoin and other cryptocurrencies can be taxed, regulated and controlled.

There have been some rules and regulations that have cropped up in different sectors, most notably a strong banning from the central bank, but the general blanketing of Bitcoins and Blockchain as negative is making it difficult for users and the technology to grow and take hold.

As it has become apparent in other nations, the regulation of the fast-moving and unprecedented digital currency revolution has to be a balanced process that protects against scams, hacks, money laundering and other scrupulous means while still allowing innovation to flourish.

But the problem in Vietnam is that there is no unified front in achieving a balanced regulatory framework- in fact, there is no framework in place at all, rather a decree from the central bank effectively determined that Bitcoin and other virtual currencies are not legal means of payment.

These decree from the bank came to the fore due to a number of negative factors that country faced in terms of cryptocurrencies. In September last year tax authorities lost a lawsuit against a citizen who had amassed an untaxed fortune from trading Bitcoin. Because Bitcoin is not considered an asset under Vietnamese law, the court ruled authorities had no legal authority to tax him.

This instance, as well as a recent case of a Bitcoin mining startup scam that was uncovered, has to be pushing the regulators in the Asian country to implement a broad and negative ban against the cryptocurrency space which has halted innovation and left many businesses that had been in operation before the regulation, in limbo.

Recently, more than 300 investors in Vietnam reported a mining scam after the head of the company, Sky Mining disappeared along with $35 mln in client money.

Le Minh Tam, director of Sky Mining, reportedly absconded to the US a few days ago.

The issue is that mining and using cryptocurrencies remains illegal in Vietnam, according to the central bank. Based on the new monetary law issued by the bank that came into effect during the first quarter of 2018, Bitcoin and others are already considered illegal and their use is prohibited in the country.

Vietnam has reacted heavily to the dangerous side of Bitcoin that has come out because of a lack of regulatory framework. With these scams, tax avoidance issues and others, the country has decided to put up a blanket ban to quash the entire ecosystem.

The regulatory foundation is currently represented by a State Bank of Vietnam (SBV) and it’s move on Oct. 30 effectively determined that Bitcoin is not a legal means of payment. But it was more than that as they also effectively outlawed the issuance, supply and use of cryptocurrencies.

Those found in violation of the decree and other relevant legal principles face fines of up to 200 mln Dong (around $9,000).

The problem is that the bank has gone somewhat off the predicted script. Before this banking decree, it appeared as if the government would be actively working to recognize and promote Bitcoin, but it has not gone that way.

The problem is the move by the central bank has put a spanner in the works for many who have been involved and built businesses around cryptocurrencies. These companies now sit in limbo with the rules and regulations not directly applied and all too ambiguous.

Not to mention that the mining crackdown has also caused problems with the equipment entering the country being held up thanks to an importation ban on such machinery.

Thus, it becomes problematic that any innovation or growth for the citizens that could come from a booming cryptocurrency industry is being stymied, but not enough to cause all to abandon hope.

There is enough to suggest that some of the cryptocurrency and Blockchain projects can work within the ambiguous framework that is predominantly negative but with its loopholes. But of course, this is not a situation that encourages growth and prosperity.