The Acromegaly of Leviathans 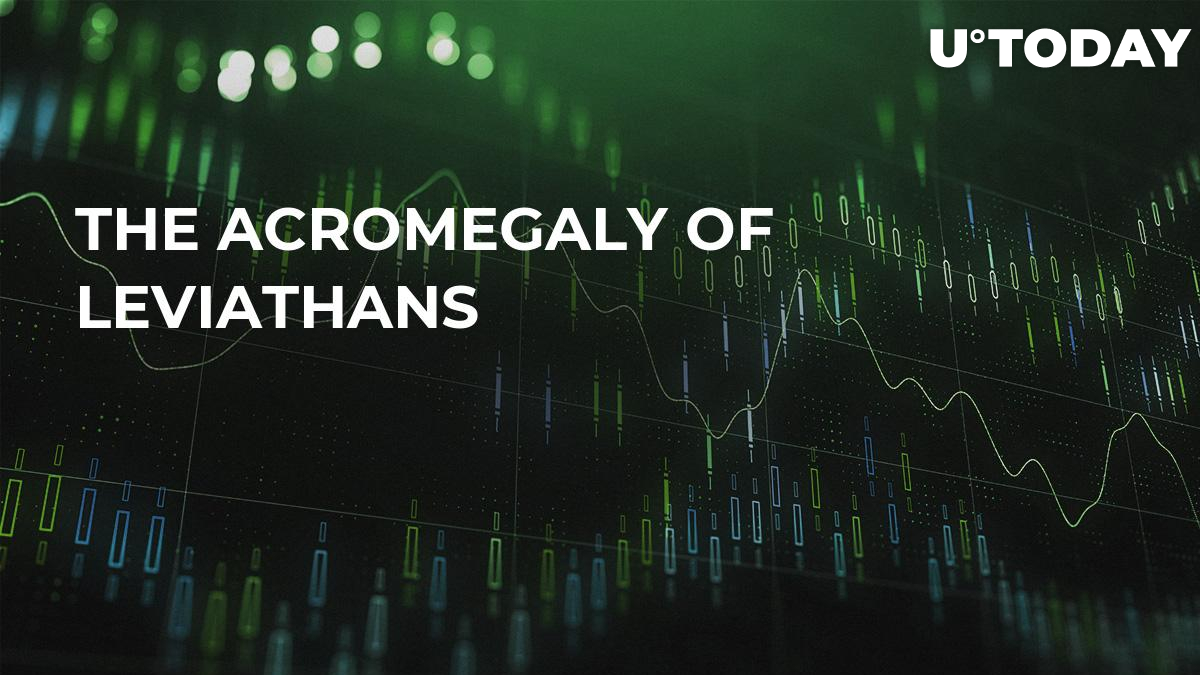 Thousands of years ago people lived in communities, and the communities had vast unclaimed lands between the settlements. The communities were small and people were able to observe each other daily and communicate with each other. Trust of various levels and straight distrust were created through community member interactions and this formed the reputation of each member.

Trust is the energy and lifeblood of any community, and no community can exist without trust. I am not talking complete trust here, but trust degrees and trust as a whole.

As communities grew bigger, they claimed more and more land that was available — the area expanded and eventually became too large to control its borders.

Governments started coming about around the same time, although how exactly they appeared is still a topic for debate and research. At high level, there are four theories about how the governments came into existence:

Regardless of the theory, what’s important is that as the communities expanded, much of the power and resources were delegated and used in an attempt to control and patrol the borders. The communities soon morphed into city-states and the trust started going steeply vertical. The trust that was given to the governments was necessary to rule and develop the city-states. The neighboring city-states then joined into countries and governments became more powerful. And it made sense.

Fast-forward to the last quarter of the 20th century when two things happened:

In 1992, Francis Fukuyama published a book titled The End of History and the Last Man, in which he argued that a universalized Western liberal democracy might be the final form of human government. In contrast to the totalitarian governments, the democratic ones involved citizens in making decisions and promoting the well-being and common good of the population.

To quote the book:

The most remarkable develop­ment of the last quarter of the twentieth century has been the revelation of enormous weaknesses at the core of the world’s seemingly strong dictatorships, whether they be of the military-authoritarian Right, or the communist-totalitarian Left. From Latin America to Eastern Europe, from the Soviet Union to the Middle East and Asia, strong governments have been failing over the last two decades. And while they have not given way in all cases to stable liberal democracies, liberal democracy remains the only coherent political aspiration that spans different regions and cultures around the globe.

The vertical trust of the totalitarian governments made them too heavy and acromegalic in infrastructure to maintain control; citizens no longer put the trust flow through the totalitarian centralized institutions and without the energy of trust, the leviathan governments collapsed. Democracy was celebrated.

What happened around the same time was the advance of the Internet and the connectedness of the world. Bulletin boards were almost immediately formed, and these were pretty much the first communities of the Internet, where people didn’t have to know each other in real life or even be in geographic proximity. They were independent, self-governed, and the energy of trust that flowed through these communities was almost horizontal. And there was a lot of energy in that.

Again, fast-forward to 2000s, and the now connected digital world went through the history of the humankind at an accelerated pace. The online self-governed communities gave way to almost totalitarian services like Facebook. At first, the trust went from vertical in the real world to distributed in the digital one with the spread of the bulletin boards in the 90s, and then it steeply became vertical again with the corporatization of online services.

And it was relatively fine at first — after all, these were the places where a lot of the communities lived now — sites like Myspace, Reddit, Facebook and so on — and thrived too. But then, the social networks crossed the point of being relatively healthy and became the same acromegalic leviathans, and the energy of community trust started leaving them.

At the same time, what we are witnessing today both in the real and the digital world is the crisis of trust — from real-world institutions to the centralized online services, trust is leaving the vertical structures and is becoming more and more distributed.

As Rachel Botsman succinctly put it in her fantastic book titled Who Can You Trust?: How Technology Brought Us Together and Why It Might Drive Us Apart:

When we look at the past, we can see that trust falls into distinct chapters. The first was local, when we lived within the boundaries of small local communities where everyone knew everyone else. The second was institutional, a kind of intermediated trust that ran through a variety of contracts, courts and corporate brands, freeing commerce from local exchanges and creating the foundation necessary for an organized industrial society. And the third, still very much in its infancy, is distributed.

With the rise of the sharing economy and the advance of the Blockchain interest and popularity, we are clearly past the vertical trust wave crest and it’s falling down into the state of being distributed, more or less horizontal, and community-based.

Communities are coming back to self-governance, community members work with each other fueled by the energy of distributed trust, and Blockchain-based platforms are the next thing to happen. And it’s happening now. U°Community have created a platform with the core ideas of self-governance and independence in mind — a place where there should be no obstacle to the flow of the energy of distributed trust.