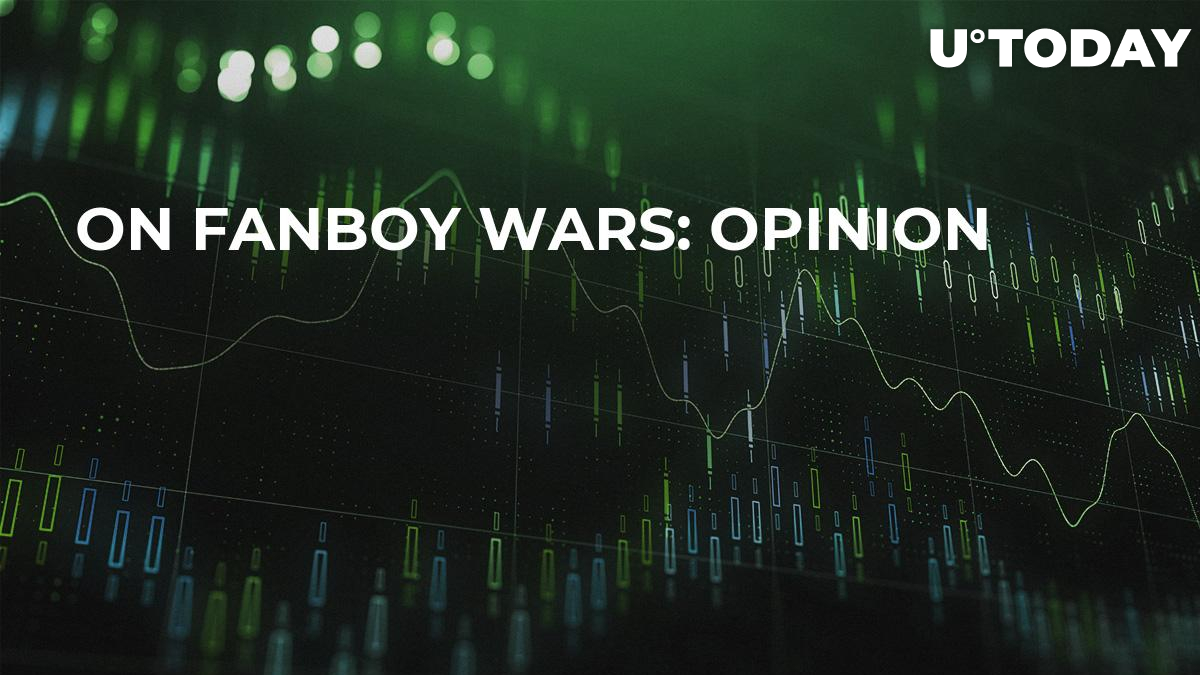 The term “fanboy wars”, coming predominantly from the video game industry, does have a derogatory shade to it, but it is the most accurate one, so I suggest we stick with it.

I am talking about the fanboy wars in crypto.

For ages people have been ardent supporters of competing products and the competing products have also been there for ages, and Blockchain is no exception. Going through the entire history of fanboy wars is out of the scope of this post, and there are literature and books covering this topic specifically, backed by significant amounts of research and with fascinating historical (and often hysterical) anecdotes to illustrate.

What I’d like to dwell on briefly is two examples: video game fanboy wars and crypto fanboy wars.

Way back in the day — in the 90s actually — it was Genesis versus Nintendo. Remember that? “Genesis does what Nintendon’t” to which Nintendo retaliated with “Nintendo is what Genesisn’t”, and blast processing, and so on. The console war that was later joined in by Sony with their PlayStation and ultimately the PC.

None of these wars would have happened without communities supporting either side and taking a vigorous part in the process. And none of the community members would have been vigorous if the video games didn’t raise strong emotions in the users, who were majorly kids at the time. Because that’s what video entertainment in general and video games in particular attempt to do — give the user a high and cause an emotional response and maybe provoke thoughts.

The members of the warring communities were heavily investing in the process because the games stirred them.

The video game industry is again booming today, but the fanboy wars took a new incarnation in crypto. A much more complex and intricate one because the people involved in it are majorly adults and because money is involved. A lot of money.

Gaining money in crypto — as in doing an X or multiple Xs or losing the value of your assets — probably causes the same level of emotional response in adults as it does in kids, but because these are grown-ups playing the grown-up games, the tactics are much more nuanced. There are shills and influencers with their own hidden (or open) agenda, identity fraudsters, and confidence tricksters.

However, the major force is one of the sincere project supporters with a genuine drive to tell the world of their discovery and learn the technology and spread the knowledge. The major — not the only one, but majorly prevalent — cause for the drive is their investment in a particular project and the financial gain that they experienced. Based on their investment, people hold ground for the camps at war because often there are competing projects and competing supporters.

The heated discussions abound, but they happen on the platforms rife with shady actors. Discussions are good. Leveled discussions are very good for they help to understand the technology better and weigh all the pros and cons of a particular project. And the knowledge spreading that happens and the content that is generated in the process is hugely beneficial for the entirety of the crypto scene and the world as a whole.

What if this space was uncluttered and all the shadiness removed? I am not talking taking away the anonymity, I am talking better structure and transparency that’d ultimately reduce the animosity. What if there was the technology that’d help us with that? You know, like the one many are warning about? Like BLOCKCHAIN.

Remember the Bitcoin early adopters when it was novel and we considered ourselves pioneer for simply mining or purchasing Bitcoin? Remember how some of them turned Bitcoin maximalists and turned against Ethereum when it was only emerging?

Remember how some of the Ethereum supporters became in their turn Ethereum maximalists when NEO showed up?

See how much at war are some of the Vechain and Waltonchain supporters?

What if all of that was happening not on makeshift social platforms that were never designed to endure all the disputes and discussions and all the content generated, but on a platform built precisely on the technology we are arguing about? There would be so much to gain for the community as a whole with all the obfuscating flak removed.