BlockSocialChain: How Blockchain Can Become a Tool for “Little Man”

Katya Michaels
Blockchain is a tool for “little man,” but are they really that little? 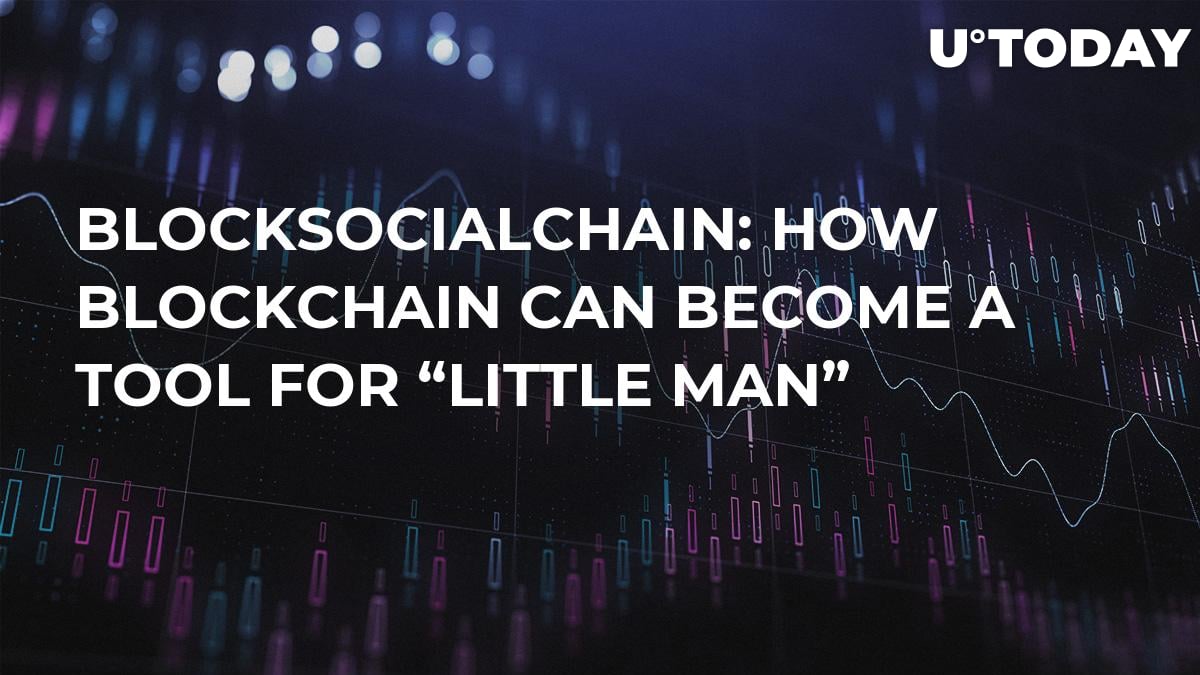 In 1932, the year before Adolf Hitler was appointed as Chancellor, German writer Hans Fallada published a novel called “Kleiner Mann, was nun?”, known as “Little Man, What Now?” to the anglophone reader. Describing the bleak and hopeless socio-economic reality of life in the last years of the Weimar Republic, the book gained immense popularity and continues to be considered a classic of German literature.

Fallada’s novel is far from being the first or last appearance of the “little man”– the insignificant clerk with a tiny salary, dependent on the system to provide for his family, caught in bureaucratic loops, powerless to change anything about his situation…

This archetype, as well as his conflict with the machinery of governmental indifference and leviathan financial institutions, makes an appearance in most literary and philosophical works of significance from the Industrial Revolution to the late 20th century. Consider works by Gogol and Dostoevsky, Kafka and Dickens, not to mention dozens of dystopian novels.

As Americans discovered in the second half of the 20th century, the desperation born of powerlessness and socio-economic immobility is not limited to the impoverished and the disenfranchised. In the 1950s, the attainment of the American Dream had become marred by a “general lust for conformity” and a “blind, desperate clinging to safety and security at any price,” as author Richard Yates characterized the context that inspired his 1961 novel Revolutionary Road.

The pressure to conform to a limited worldview became its own kind of centralized power, and society’s willingness to give up diversity and freedom for comfort and convenience, hollow as they may be, turned out to be a harbinger of the social media challenges we face in the early 21st century. The modern “little man” of the West has been appeased with adequate bread and circuses, but as it turns out, remains trapped and exploited. What now?

Technological advances have always been a double-edged sword for human progress, but if there is anything that can help us overcome natural and socially constructed boundaries, it is the application of scientific knowledge. As science and technology advance, people are empowered to strive beyond centralized control to better awareness and freer choices. Telecommunications allowed us to peek beyond our circumscribed worldview, the pill gave women more control over their fate and a better shot at equality, while genetics showed us how our differences are, and are not, defined by a universal human codex.

Blockchain is the next major technological advance that can enable humanity to break from geographic, societal and economic constraints. As more platforms emerge and underlying infrastructure is developed, a device with Internet access and a will to learn about Blockchain applications is all that’s required to become part of the new global economy.

For people in developing countries, access to a secure decentralized financial system, smart contracts and a corruption-proof ledger can make the difference between relentless generational poverty and economic independence through investment or self-employment.

Crystal Rose, a developer and entrepreneur who has been very active in Puerto Rico’s recovery through decentralized solutions, has seen the potential of Blockchain for poverty relief: “My heart is in getting every human to become their own sovereign entrepreneur…. Having seen what kind of impact Blockchain can have on a place that is in need of literally every resource- that's a really big mission.”

The revolution will be incentivized

All Blockchain-based solutions, whether cryptocurrencies, identity tools or entertainment platforms, are built to incentivize good actors and reward behavior that adds value to the network. The incentives include direct financial compensation to those who choose to be active and trustworthy participants of the economy.

Toni Lane Casserly, one of the most vocal proponents of Blockchain-based governance, emphasizes the way Blockchain will redefine the value of human life: “Looking at another human being and seeing their only value as an economic asset is unacceptable…. The only way we're going to [empower] every human life is if we are fundamentally incentivizing people to have economic liberation through real open markets.”

Thus, as users find more gainful options for engagement in the global economy, big business has to vie for their loyalty and cooperation through incentives, rather than guarantee commitment through limitations. Perhaps, with the help of Blockchain technologies in the 21st century, the “little man” will finally gain independence and call the shots.

Ghosts in the machines

Before that can happen, though, Blockchain technology has to be more widely adopted. Are people prepared to understand and trust cryptographic ledgers?

Alongside the government and financial institutions, the role played by big technology in the subjection of humanity is another running concern in 20th-century literature. In Brave New World and The Minority Report, in Do Androids Dream of Electric Sheep? and Neuromancer, we have envisioned ways in which advanced technology runs away from its creators.

With a gadget placed in the hand of half the world’s population, constant and omnipresent surveillance has become a reality of modern time, even if governments deny it and users prefer not to dwell on it. According to studies, most Americans think that technology plays a large part in improving life now and in the future, but at the same time they are highly concerned about the implications of increased automation and would like to see big technology companies more regulated.

Keeping new technology on our side, such that can take advantage of its possibilities without letting it corrupt our intentions is a delicate balance. Just like the Internet, Blockchain runs the risk of serving the masters it came to undermine. Truly decentralized public Blockchains are as of yet not the right fit for many implementations, but private Blockchains are more susceptible to manipulation. Overall, whether the benefits outweigh the risks is an evaluation that all participants of the new economy and the emerging crypto community will have to make for themselves.

Only a short time after the publication of “Kleine Mann,” the world was hurled into a series of conflicts culminating in the Second World War. Hitler’s success is attributed in part to the frustrated and demoralized spirit of the German people at the beginning of the 1930s. The revolt of the “little man” against oppression can become a vengeful and bloody affair– when the pendulum of dreams deferred and dignity denied swings back, history shows that it’s easy to go too far.

But Blockchain hailed as the truth machine and as the cryptographic guarantee of trust, may forever change the dynamics of social change. By transparently promoting values of decentralization, inclusiveness, political freedom and economic independence, blockchain might reveal to us that we were never the “little man” to begin with– we just didn’t have the right tools yet. We do now.