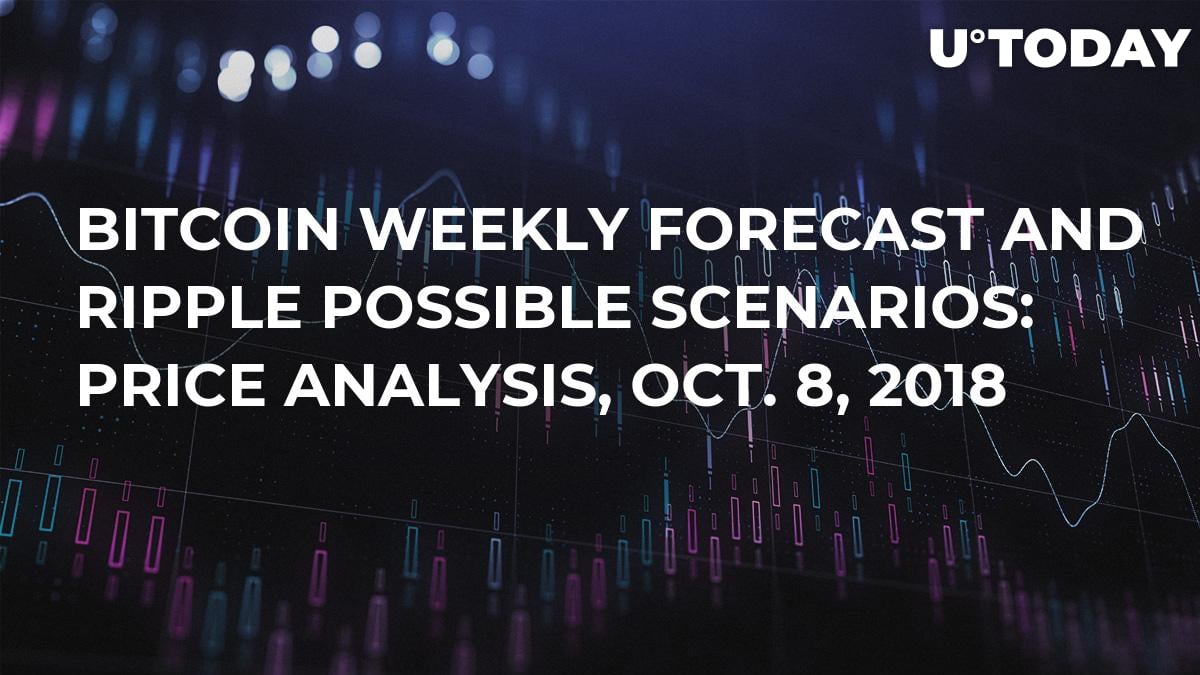 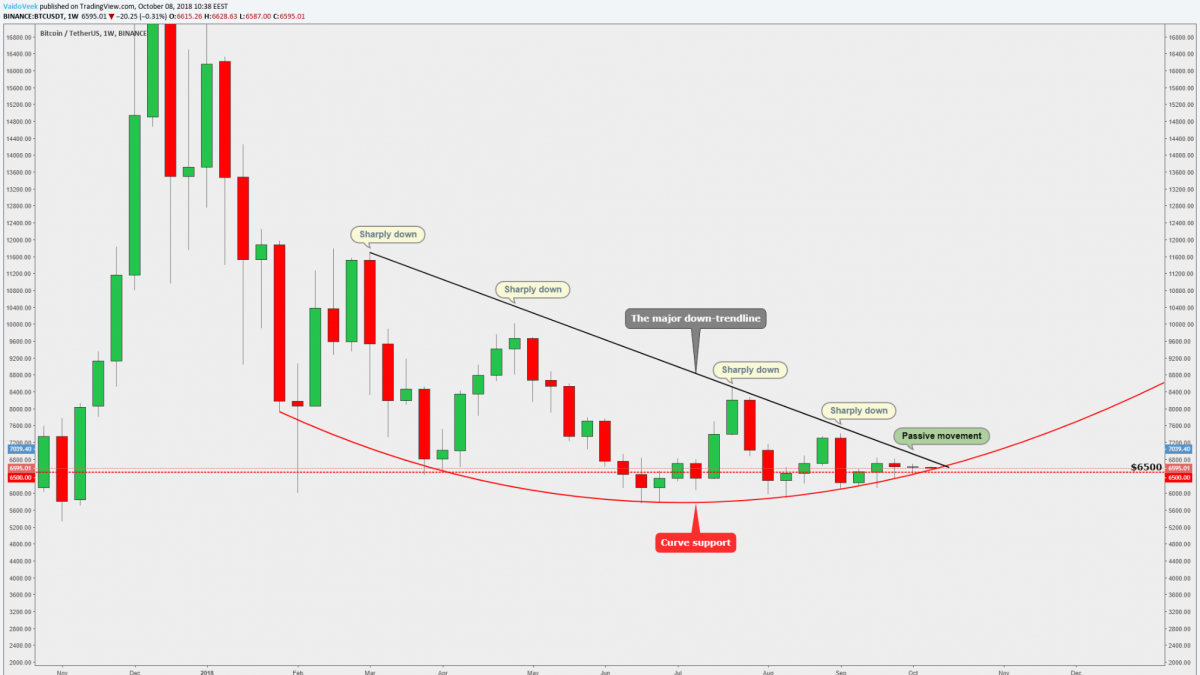 Let's start with a weekly time frame. In the picture above, we have a curved support line which reflects the price over a period of time. It starts this February, and now we have touched it multiple times over the last weeks. Previously, when the price was approaching the trendline, it was rejected quickly and had to move sharply downwards and when the price has touched the curved support line after that, it has bounced upwards pretty quickly. But currently, we are waiting for the momentum with the volume. This week we will definitely see a bigger movement because the price is approaching the crossing area and is ready to make a breakout in either direction. In order to find out which direction is more favorable, we need to examine shorter time frames, too. However, during the last three weeks, the price has bounced upwards from the round number of $6,500 which works as a support. Note that there are more bullish signs on shorter time frames. 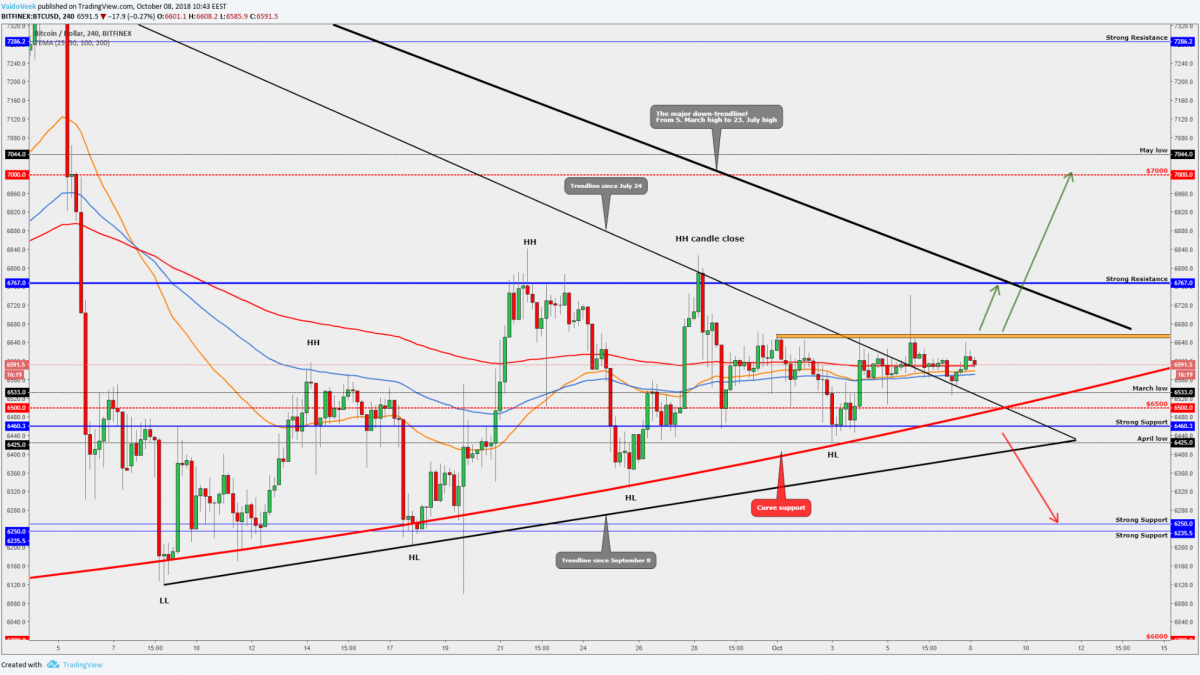 Let's take a look at a four-hour chart. As you might have already noticed, we managed to push through the trendline which was the last week major goal. Over the weekend, as usual, the price moved sideways because the weekends are historically with a super-low volume. Luckily, this sideways kick brought an important price action movement. On Friday, Bitcoin broke above the trendline and over the weekend made a retest and got a bounce exactly from the trendline which previously was a resistance and now becomes a support.

To get a move upwards, we have to break above the orange line, which is just above the current price. This level has worked multiple times as a resistance and if this level breaks, it will be the first sign of the bullishness. That would be a small step due to Bitcoin’s super-strong resistance and the major down-trendline crossing area position above the orange line. Crossing area is very hard to crack and we need a massive volume to accomplish that. If Bitcoin moves upwards, we can get the power to guide us through $6,767 and through the major down-trendline. Thus, the first major targets would be around $7,000 and $7,300.

In the four-hour chart, the Bitcoin price trades above the all-important EMA's which is a good sign if we want to see a movement upward. However, in the daily chart, the price is currently below the 50 EMA. It works as a resistance and matches with the orange line on the four-hour chart. The orange line is the first short-term level for bullish BTC.

Weekly timeframe analysis indicates that the price starts to ‘think’ differently — three weeks around the major trendline without any dump are an indication.

The four-hour chart shows bullish signs such as trendline breakout and retest, but strong support levels at $6,460 and $6,500 have held the price nicely.

The correction to $6,460–$6,500 is possible; however, it’s not favorable to witness candle close below these levels. Specifically, it applies to a daily candle close because then the bullish momentum would be gone and the possibility that the bears start to control the market would be high.

Since Sept. 22, the Ripple price has had consolidation between $0.45 and $0.6. Remember, last week we discovered  “Cypher” harmonic pattern and now it has completed. Currently, it got a bounce exactly from the ‘complete area’ at $0.475. 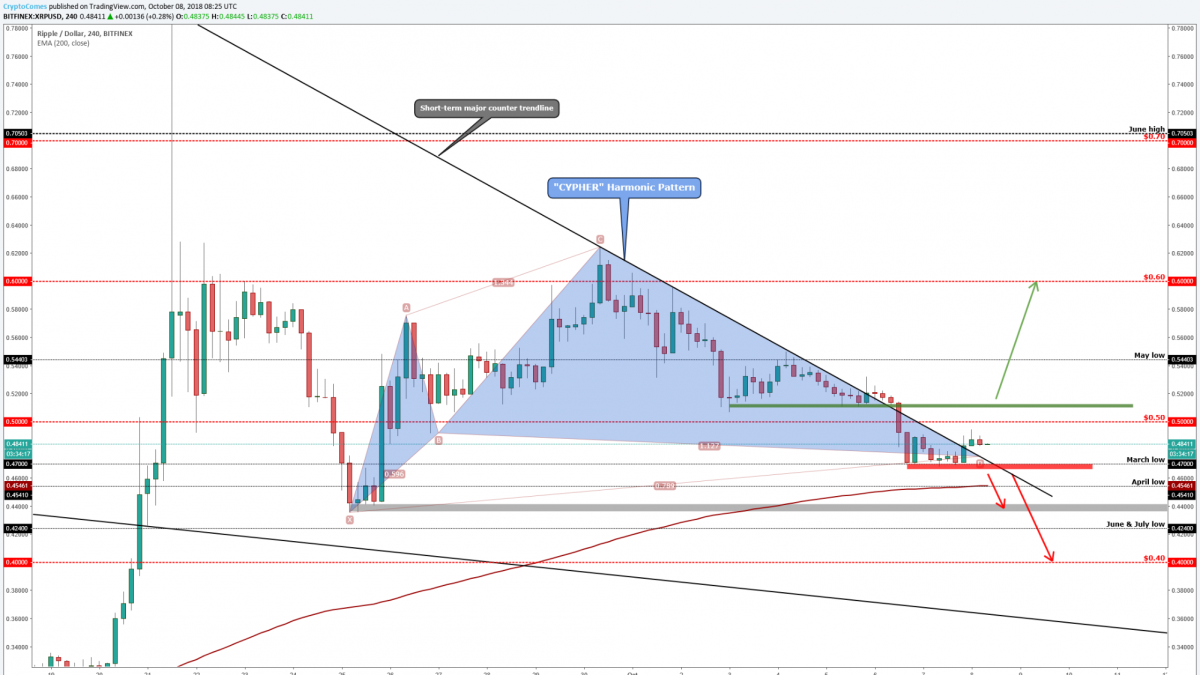 The price is again above the short-term counter trendline which is a good sign if the market stays stable. To get a full confirmation, we have to break the round number of $0.5 which works as a resistance. In this area, there is also an old support level which now transfers into the resistance level. So, the road to the higher prices is almost free. The only stop could be on the May’s low level at $0.544. This scenario could be very powerful if Bitcoin makes a breakout upward from the major down-trendline. In this case, the target is even higher and we can easily reach it into the June low level at $0.7.

Bearish confirmation would be a candle close below the previous low at $0.47 (below the short-term counter trendline). The first support would be the grey area, which was the support on Sept. 25, and after its crack, the major support would be at $0.4.