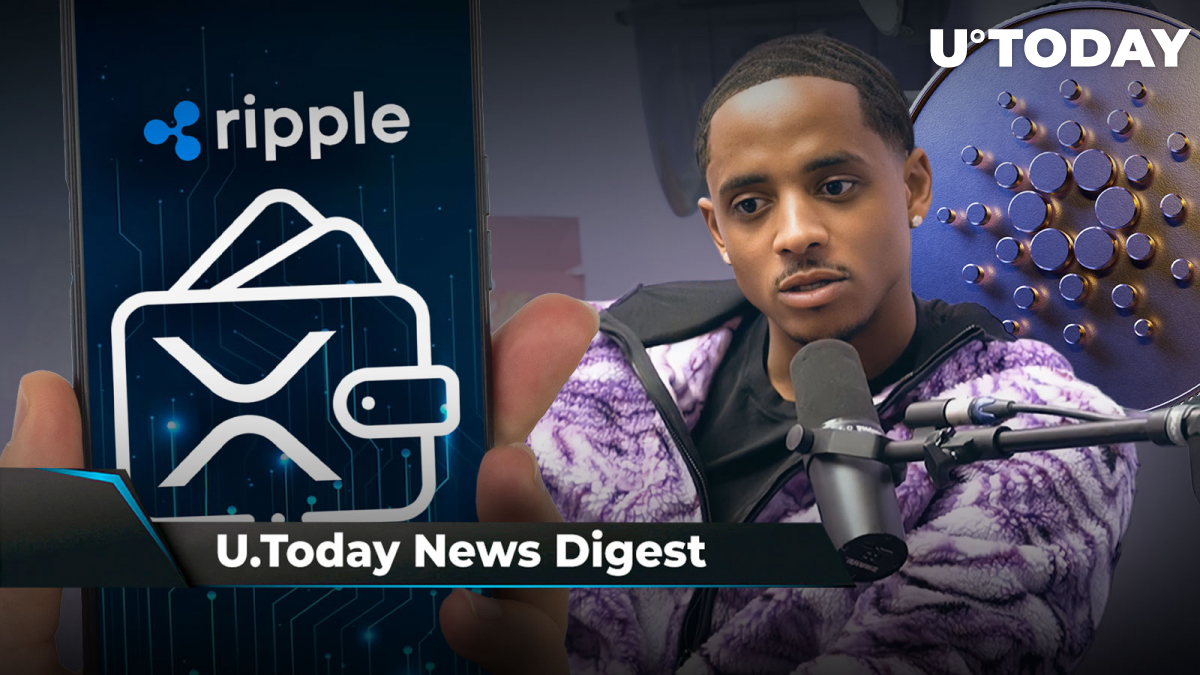 Champ Medici, son of world-famous rapper Snoop Dogg and well-known crypto enthusiast, has released a new music album, with its main theme being Cardano and its most high-profile NFT project Clay Mates. It is the first release of the young artist since he officially joined the Clay Nation team in August of this year. The new mini album is titled Clay Nation Tapes Vol. I and consists of three tracks: Manifest, ADA Dreams and Lil Flex’n. In all three, Medici describes his crypto experience with bravado and enthusiasm. Judging by the album’s title, it will not be the last musical collaboration between Champ Medici and Clay Nation. However, the release date of the album’s second part is yet unknown.

Ripple shovels 50 million XRP to anon wallet, here's what it means for market

Yesterday, WhaleStats, a crypto transactions tracker, detected a total of nearly 582 million XRP on the move. Among these astonishing amounts of Ripple-affiliated token was a 50 million XRP transaction to an anonymous wallet conducted by Ripple. However, according to another tracker, Bithomp, this massive chunk of XRP was sent to Ripple’s own alternative address, RL18-VN. The address is used for sending XRP beyond the fintech giant — to institutional customers and exchanges, to sell or support the coin's liquidity, and to custodial wallets such as BitGo. This means that Ripple is preparing to inject another 50 million XRP into circulation as the token’s price is increasing. XRP is currently trading at $0.4061, per CoinMarketCap.

In a recent tweet, January Walker, a congressional candidate and representative of the United Utah Party, called Cardano an “efficient” blockchain. She also mentioned Bitcoin in her post, but the largest crypto did not get praise from Walker. Instead, BTC was referred to as an example of an “inefficient” blockchain. On the first day of the week, the candidate encountered some backlash on Twitter after writing that blockchains could solve the water crisis. Many users did not share her enthusiasm for the cutting-edge technology. However, she explained that it could be possible to enhance sustainability, compliance and consumption management by integrating blockchain and IoT technologies.

Amazon to help burn 140 million SHIB, here’s how much will be burned via e-commerce giant

According to @shib_superstore, a Twitter account created by Travis Johnson, by the end of September, the amount of burned SHIB is likely to surpass 140 million meme tokens, or $1,500 in fiat equivalent. The Amazon affiliate program that Johnson began to use earlier this year is going to help him do that. The amount of SHIB burned via Amazon at this pace will be roughly 27,649,769 SHIB evaluated at $300. In the meantime, the pace at which the community is removing SHIB tokens from circulation appears to have slowed down. Even with 40% of it having already been sent to dead-end wallets and locked in them permanently, the price still would not skyrocket to $1 or even to $0.001, as many had hoped earlier this year.