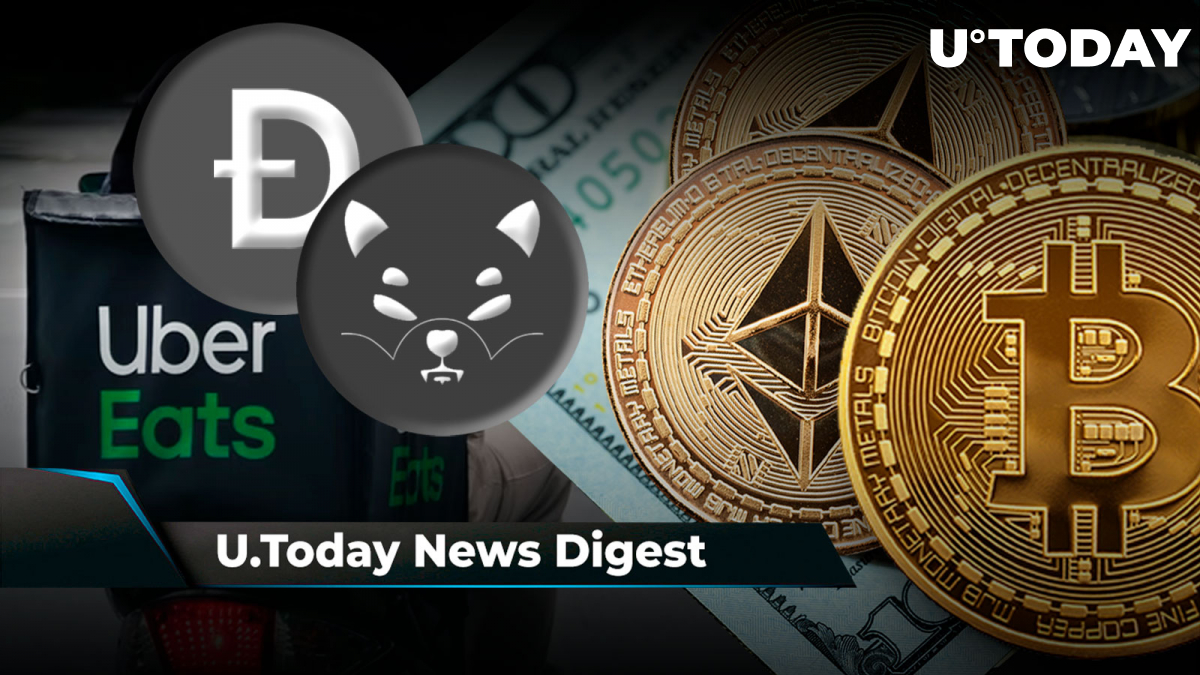 To keep you informed, U.Today has prepared the top four news stories from the past weekend.

Both the Shiba Inu and Dogecoin communities are celebrating a new use case for their beloved crypto adoption as Uber Eats, a well-known food delivery service, accepts meme coins as a means of payment via BitPay. According to a blog post by BitPay, since Uber Eats does not yet accept direct cryptocurrency payments, this method of payment is exclusive to BitPay gift cards and BitPay cards. In addition to this, Panini America, a company that specializes in sports collectibles, has announced the upcoming launch of its crypto wallet that will support cryptocurrencies such as Shiba Inu, Bitcoin and others in conjunction with BitPay. At the moment, SHIB is trading at $0.000010 and DOGE at $0.067, per CoinMarketCap.

Santiment’s most popular metric, MVRV divergence, suggests that Bitcoin, Ethereum and other altcoins are currently "underbought." According to the on-chain analytics company, these crypto assets have hit the historic MVRV level, at which a price turnaround to reduce current losses may be expected. However, it is difficult to predict when this will happen. Per Glassnode, several floor formation indications are currently flashing for Bitcoin. It is worth noting, though, that when it comes to determining a bear market floor for BTC, all models and historical precedents may be put to the test. Alex Kruger, a crypto analyst and economist, thinks that Bitcoin might have capitulated during the market slump two weeks ago. He emphasized that trading volumes reached their peak at this time, indicating capitulation, which produces significant bottoms.

Peersyst Technology, a Ripple partner and software development company based in Barcelona, has announced the launch of Colombia's first National Land Registry on the XRPL blockchain. The solution has been implemented for Colombia's National Land Agency, "AgenciaTierras," and is based on the XRP stamp, which enables digital assets to be registered on XRPL and their authenticity to be verified with a QR-code. Meanwhile, Ripple CTO David Schwartz has shared the release of Clio 1.0, an XRP Ledger API server that aims to enhance the scalability of access to XRPL data. The released XRP Ledger API server hopes to improve throughput for API requests, reduce memory usage and storage overhead, and allow easier horizontal scaling.

In a recent tweet, Nassim Taleb poured cold water on the flagship cryptocurrency, Bitcoin. The famed mathematician said that even if the flagship crypto surges to as high as $100,000 during another bull market, it will still be a failure. He believes this since Bitcoin, in his opinion, has not delivered as a hedge against inflation and even acted with opposite properties. Taleb has also taken aim at so-called “bitidiots” like El Salvador President Nayib Bukele who still claim that Bitcoin is cheap. Last week, Bukele bought another 80 Bitcoins despite the fact that El Salvador had lost more than $50 million because of his ill-timed Bitcoin purchases. Taleb reacted to the country’s purchase by thanking those on the other side of the trade for “selling cheap.”