Rent and Borrow NFTs Risk-Free without Collateral via IQ Protocol

Guest Author
How is it possible to rent NFTs without any collateral? Introducing PARSIQ’s IQ Protocol 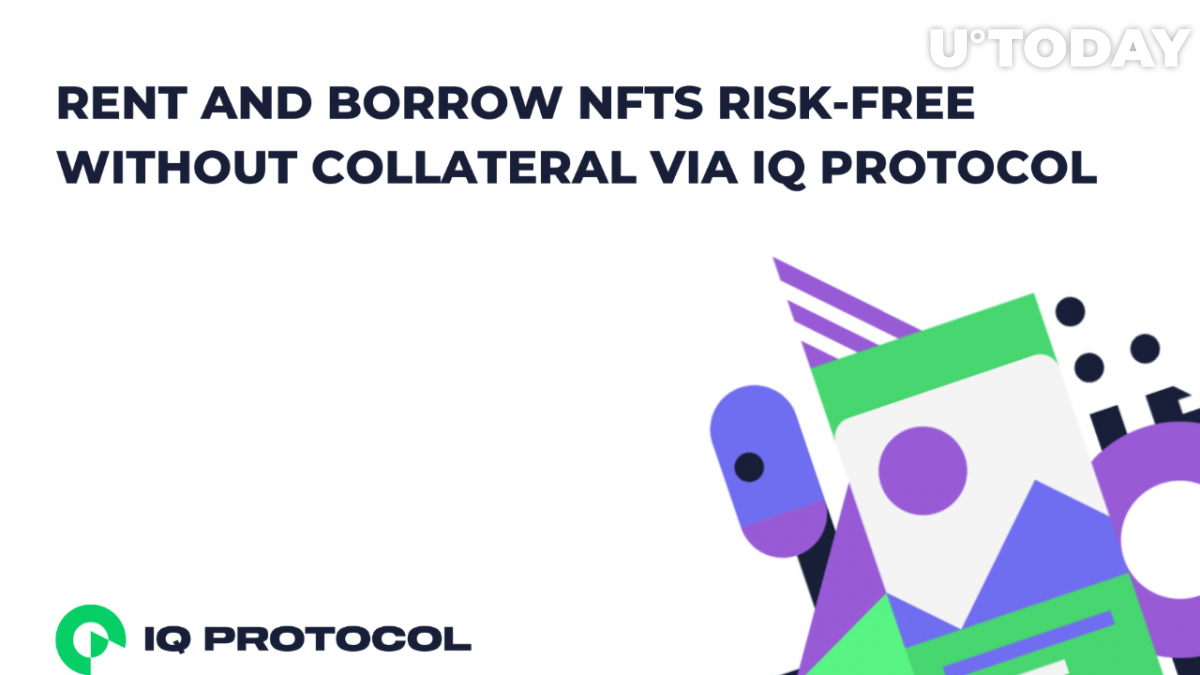 In the third quarter of 2021, the total sales for non-fungible tokens (NFT) were over US$10.7 billion, which is eight times more than the previous quarter. More and more people can now see the benefit of owning NFTs and are keen to have one. However, owning NFTs comes with numerous risks and costs.

Various projects such as ReNFT have allowed individuals to borrow NFTs instead of buying them. This means that people can try out NFTs before committing to owning them. For example, if someone wants to play an NFT game but isn’t sure whether the investment is worth it, they can rent an NFT first to test the waters. But to rent it, the borrower must provide collateral, usually in commonly accepted crypto-like stablecoins or ETH. Overcollaterization is required in many instances, which forces the borrower to lock in more upfront capital than the value of the NFT itself.

Although collateralization is a good insurance method, it still limits people who can borrow because of the substantial capital required to borrow NFTs, especially those on the pricier side. Renting expensive NFTs makes sense when you only need the NFT for a specified time. Otherwise, people can buy affordable NFTs. However, the NFT world has many high-valued and pricey items. The need for collateral does not solve the root problem of borrowing NFTs for a low upfront total cost, especially when you need overcollaterization.

Apart from the borrower’s problem, collateralization can also be a problem for NFT lenders. If the borrower defaults, the owner ends up without the NFT and with the collateral instead. While some people won’t have a problem with the collateral, many NFT owners wish to keep their NFT. For example, what if NFT gains more value later on and you "missed out" because the borrower defaulted? WIll there be any guarantee that the NFT will be returned to the owner? There are too many risks involved for NFT owners. At the same time, opportunities to generate yield on the NFT can be missed. A more balanced approach is needed.

Lastly, not all platforms offering NFT renting have a time limit on the borrowed items. What if the owners want it before a particular time? How can it be enforced with smart contracts?

Introducing PARSIQ’s IQ Protocol, a DeFi protocol that is enabling new possibilities with NFT lending and borrowing. The customizable protocol allows borrowers to rent NFTs without having to lock collateral. All NFT renting has a specified time limit, which means that lenders will always receive their NFT back, removing the risk of borrower defaults.

How is it possible to rent NFTs without any collateral? Instead of giving the original NFT to the borrower, IQ Protocol mints an expirable version of the NFT, ensuring that the original NFT is always returned to the owner. If there’s a guarantee that the NFT will be returned after a certain period, lending an NFT is essentially risk-free. The terms are governed and executed by trustless smart contracts, removing any middlemen necessary to uphold promises. Moreover, it eliminates the possibility of borrowers ending in default, since they are getting an expirable version instead of the actual NFT. Therefore it is not possible for the borrower to indefinitely keep the original NFT, because they received an expirable version of the NFT. The minted “iNFT” can be thought of as a utility version of the original NFT, with specified logic such as the expiry period, how many times the NFT can be used for certain actions, the interest rate and more.

When compared to existing NFT lending and borrowing systems, IQ Protocol solves the most fundamental problem of renting NFTs. By removing the need for collateral, individuals can now borrow expensive NFT for a much affordable price, allowing them to try or use an NFT before committing to owning it.

In addition, NFT owners now have additional monetization options that are risk-free from a lending perspective. Borrowers still pay interest fees to rent the NFT, providing risk-free income streams for NFT owners. Instead of simply holding the NFT, owners can lend their assets into a renting pool, where interest accumulates from the borrowers’ fees. This is where DeFi and NFTs converge to create new use cases for NFT platforms.

For example, imagine players buy and own NFT weapons for a popular shooting game. Given that you have many other weapons to use, the gamer can rent out his or her exclusive weapons to other players for 3 days. The gamer earns interest fees paid by other players who borrow the NFT. When the gamer is not playing, the gamer still earns passive earnings from renting out the NFT to others, creating additional utility for the in-game assets within the gaming ecosystem..

NFT renting is also a useful feature for NFT marketplaces. In addition to the core functions of minting, auctioning, buying and selling NFTs, platform users can rent out their NFTs to others. Interested users can pay nominal fees to the owner for renting them. For example, the borrower may want a very specific NFT in order to showcase it for a virtual gallery event.

Another example is when the borrower needs a certain NFT in order to qualify for an upcoming NFT airdrop. The condition to get the airdrop is to hold a specific NFT, which is very expensive to permanently buy. Instead of buying the NFT, the borrower can pay much less to rent the NFT during the airdrop period. The NFT is returned after the airdrop is concluded and the borrower receives the airdrop. The lender then receives passive interest fees. We assume here that the lender is not interested in the airdrop. This results in a win-win scenario creating real utility for NFT marketplaces. Such use cases are only a glimpse of the plethora of new ways that NFT renting can be utilized for platforms curating NFT content.

NFTs are growing to become a new revolution in how digital ownership is defined for just about anything we can own. IQ Protocol’s technology eliminates the need for collateral in lending and borrowing NFTs, unlocking exciting new possibilities for NFT owners, buyers, marketplaces, artists and more in a risk-free way.