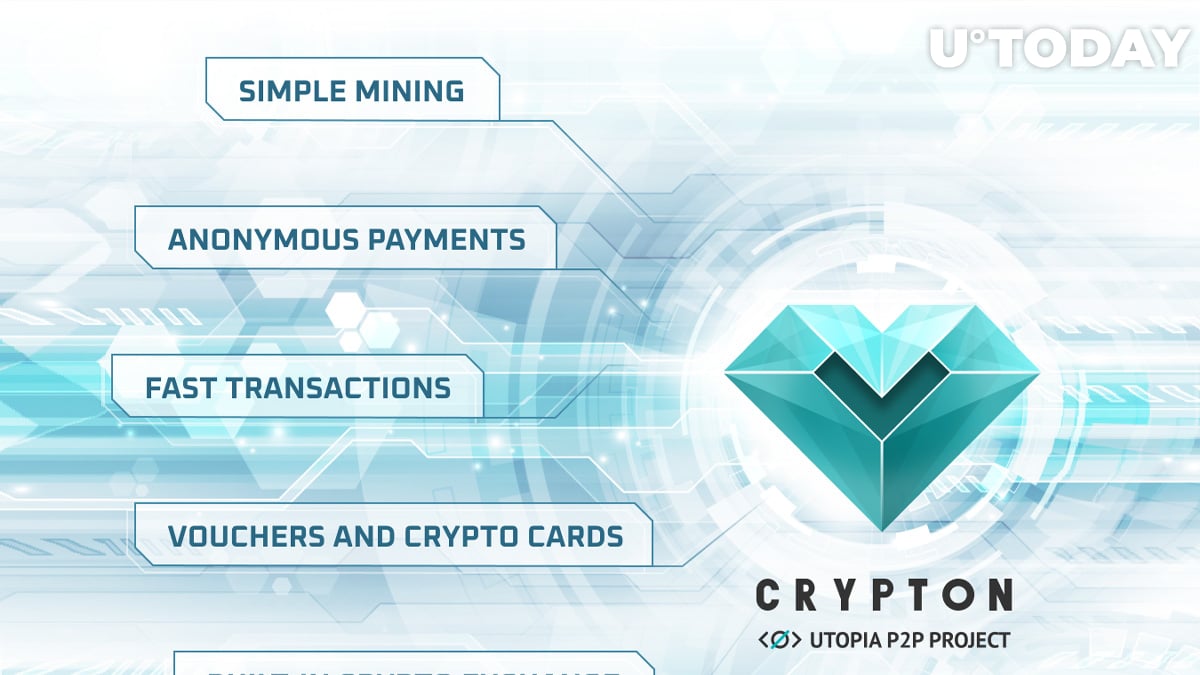 In today’s hyper-connected world, privacy – or the lack thereof – is now more important an issue than ever before. Your personal data is a valuable commodity to advertisers and those who may wish to scrutinize (and censor) you. One of the most effective ways to track you online is by following the transactions you make - and the digital trails your transactions leave behind.

The 1984 Group created Utopia as a Peer-to-Peer ecosystem to protect your identity and freedoms online. And at the heart of that network is the private, digital currency, Crypton (CRP).

What Exactly is Crypton, And What Can You Do With It?

Crypton settles permanently in less than 3 seconds, enables microtransactions and automated payments through integrated APIs. All transactions are not only fast but also untraceable and irreversible.

Crypton was fairly launched, as an integral part of the Utopia P2P ecosystem, on November 18, 2019 without an ICO, private investors or team allocation.  It is based on blockchain technology and is designed to provide users with complete anonymity and freedom.

To put it simply, it is the optimal digital currency for those who wish to conduct fast and 100% confidential financial transactions.

What Makes Crypton Different From Other Cryptocurrencies?

A flood of different cryptocurrencies is currently on the market, with more released all the time. Some are surrounded by a great deal of attention and fanfare. For a cryptocurrency to be adopted (and therefore retain its value), however, it has to offer more than just hype. It needs defining characteristics to set itself apart from the competition.

The two key features that make Crypton stand out from other cryptocurrencies are its sophisticated form of encryption and transactions that are entirely private by default.

As mentioned earlier, Crypton is part of the Utopia ecosystem; a system whose aim is to guarantee complete protection of your privacy. Just like Bitcoin, Crypton is not controlled by a single entity. It is fully decentralized and runs independent of any authority; be it a major company, institution, central bank, or even government. Because there is no central control or server, Crypton, and indeed the entire Utopia network, is less susceptible to attack or price manipulation in currency markets.

Many other cryptocurrencies are not as private as their proponents would like you to believe.  Some carry metadata and can be forked into new currencies, lowering the value of the original chain. Situations like this compromise your privacy while also making the original currency more vulnerable to attack.

However, the cutting-edge technology developed by the 1984 Group for Utopia has ensured that Crypton cannot be forked or exploited in any way. What is more, not even the creators of the Utopia ecosystem can alter its algorithms – and that includes those for Crypton.

Encryption features are provided in the u-wallet by default. All your assets are kept in an encrypted container protected by multilevel cryptographic methods.  Your currency will be protected from any hacker, regardless of the computing power at their disposal.

Transactions on the Crypton network are just as secure as storage.  Your transaction is encrypted, and a cryptographic signature links the transfer of your transaction to the blockchain.  Nobody can link your transactions to your IP address. In other words, no one can ever find out who paid what to whom when using Crypton.

The Future of Crypton

Because Crypton is such a young currency, it is hard to compare it with other cryptocurrencies. However, it seems that Crypton will only go from strength to strength. Several crypto exchanges want to host Crypton for free (which tells us something about the demand for the currency).

Because Crypton is the exclusive digital currency of the revolutionary Utopia P2P ecosystem, demand for it will only increase as adoption of the ecosystem continues to rise. There is a great deal of interest for the currency online which can be confirmed by performing a search for “What is Crypton?” on Google and examining the results for oneself.

Could it be that Crypton will be the next Bitcoin? Will it make its early adopters wealthy in the same way that the biggest cryptocurrencies have? There is only one way to find out, and we invite you to join us in anticipation of the inevitable.