No, a Woman Did Not Use Bitcoin to Send Money to ISIS: False Narrative

Joseph Young
Woman allegedly sent $150,000 in bank transfers to ISIS. But, the media decided to focus on Bitcoin 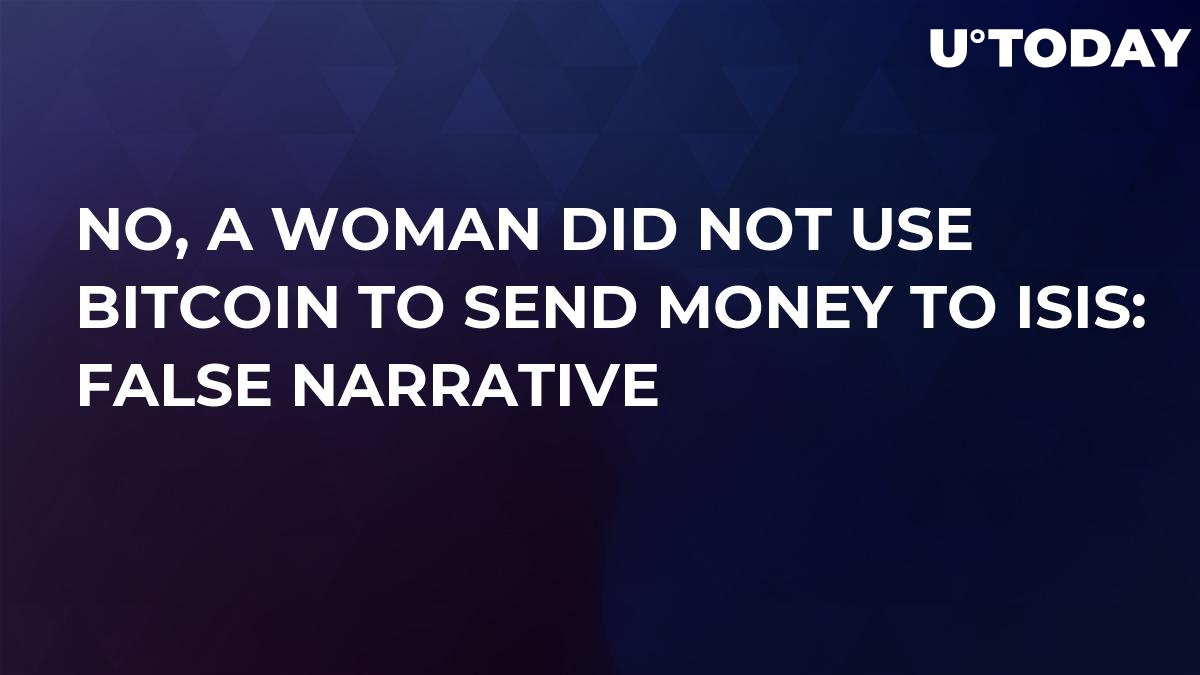 A 27-year-old woman named Zoobia Shahnaz based in Long Island sent a $150,000 wire transfer to ISIS members in Pakistan, China, and Turkey. Yet, mainstream media reports focused the incident on Bitcoin.

On November 26, CNBC published an article with the headline “New York woman pleads guilty to using bitcoin to launder money for terror group ISIS.” The report explicitly described a process in which she obtained fraudulent credit cards, bought Bitcoin with it, sold the Bitcoin, obtained cash, and allegedly sent the cash to ISIS members through bank wire transfers.

“Most of these cryptocurrencies that [Shahnaz] purchased were then converted to U.S. dollars and transferred into a checking account in the defendant’s name.”

Banks Were Used to Transfer Money

As the report of CNBC states, all of the payments Shahnaz allegedly sent ISIS throughout the past 16 months involved cash and banks and were processed through a series of wire transfers.

“After getting the money, Shahnaz made several wire transactions overseas that were designed to avoid financial reporting requirements and conceal the source and destinations of the illegally obtained cash, according to authorities,” the report read.

No direct payments were sent to the terrorist group using Bitcoin or any other cryptocurrency, mostly because by nature, Bitcoin is not anonymous. With blockchain analytics firms like Chainalytics, which works with major cryptocurrency exchanges like Binance, the world’s most widely utilized digital asset trading platform, it is virtually impossible to cash out illegally obtained Bitcoin on an exchange.

If the woman bought Bitcoin on a regulated cryptocurrency trading platform based in the U.S. with credit cards, then her identity is stored by the exchange from the Know Your Customer (KYC) process she had to undergo before purchasing the cryptocurrency.

Earlier this month, an initial coin offering (ICO) exit scam called Pure Bit raised $30 million in Bitcoin and Ethereum and disappeared with user funds. On various messaging platforms including Kakao, investors in the ICO were kicked out with a simple message: “I’m sorry.”

However, the addresses used by the ICO operators were made public during the token sale process. When the individuals sent the money to Upbit, South Korea’s largest cryptocurrency exchange by daily trading volume, the exchange was immediately alerted and froze the funds of the scam group.

Possibly because the operators found out that it is not possible to withdraw the stolen Bitcoin and Ethereum on exchanges in South Korea, the group came out with an apology and absurdly decided to refund all investors.

“I made an unforgivable mistake that cannot be turned around, blinded by money. It has been less than a day and I have already started to suffer from guilt. Although it cannot be compared with the hardship faced by the investors, I also felt significant guilt. I sincerely apologize to all of the investors in the ICO who were affected by the operation,” the operator of the ICO said.

The narrative against crypto that digital assets are tools which enable criminals to launder money has been overplayed by critics for many years.

With practical regulatory frameworks and increasing efforts of exchanges, it has become more challenging for criminals to use Bitcoin to process transactions.