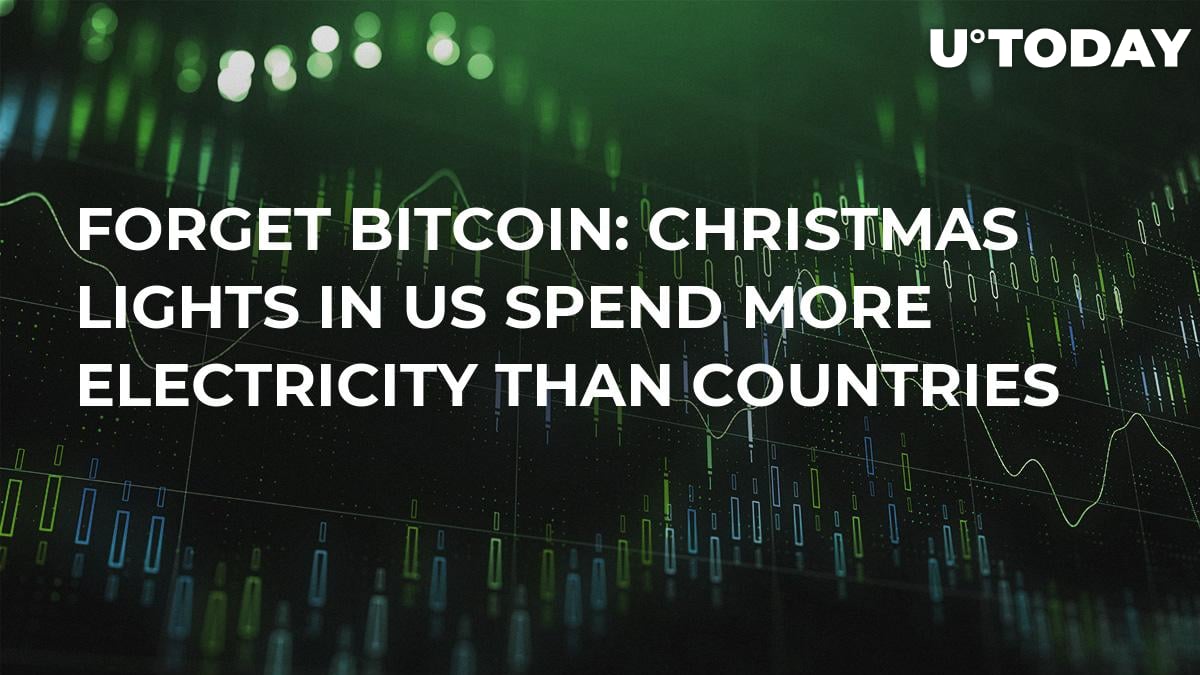 In 2015, the Center for Global Development reported that Christmas lights in the U.S. consume more electricity than entire countries, resonating recent reports on the excessive usage of energy by Bitcoin.

According to Phys.org, 6.63 billion kilowatt hours of electricity is consumed on a yearly basis by Christmas lights hung on trees, rooftops, and homes. The level of electricity consumption by Christmas decoration easily surpasses that of developing countries like El Salvador and Ethiopia.

Bitcoin is Hurting the Environment Narrative

For years, the mainstream media and researchers have condemned the usage of electricity by Bitcoin. Several comparisons between the energy consumed by Bitcoin mining centers and countries were made to portray the large-scale energy consumption of the digital asset.

However, the same argument was made against gold when fiat money or cash was first introduced many decades ago.

In a paper submitted to the Mises Institute, Stephan Livera stated that the critics against the use of energy by gold did not take into account the energy, resources, and electricity used by various service providers that are required to sustain the accessibility to fiat money.

Livera noted that the argument against gold did not consider the following factors, citing the work of Roger Garrison’s “The ‘Costs’ of a Gold Standard”:

“(1) the costs imposed on society by different political factions attempting to gain control of the printing press, (2) costs imposed by special interest groups who persuade controllers of the printing press to misuse their authority (print more money) for the benefit of special interests, (3) inflation-induced misallocations of resources as a result of misused monetary authority, and (4) costs incurred by businessmen in their attempts to predict what the monetary authority will do in future.”

Critics of Bitcoin could consider the level of energy consumption by the digital currency as excessive and unnecessary. But, critics fail to consider what mining Bitcoin actually offers; it is not merely generating more supply of BTC but processing transactions and verifying payments.

Related
The Weird Connection Between Bitcoin and Tobacco

Hence, if the use of energy of fiat is to be compared with Bitcoin, the resources used by the central bank, commercial banks, political factions that attempt to gain control of the printing press, ATMs, and many other factors have to be considered; and when all of the factors are combined, they are significantly larger than the resources consumed by BTC.

“Bitcoin’s computationally costly design gives stronger resistance to forgery, inflation, and theft. This is due to the difficulty of production, and also to easy-to-verify dynamic of Proof of Work schemes,” Livera added.

Critics often assume that the usage of electricity by Bitcoin miners will continue to grow exponentially throughout the years to come, disregarding variables that include:

The same concept could be applied to Christmas lights. If Christmas lights continue to spend more energy at the same rate it has increased by over the past decade, it could have a devastating impact on the environment. But because most things do not increase linearly or at an identical rate in the long-term, it simply cannot be predicted accurately.

Products for entertainment spend more energy than a consensus currency that is used to process $8 billion a day, which with social scalability offers decentralization, resistance to forgery, and manipulation.