Valeria Blokhina
U.Today presents its recent news digest with the hottest crypto news from the weekend, check it out! 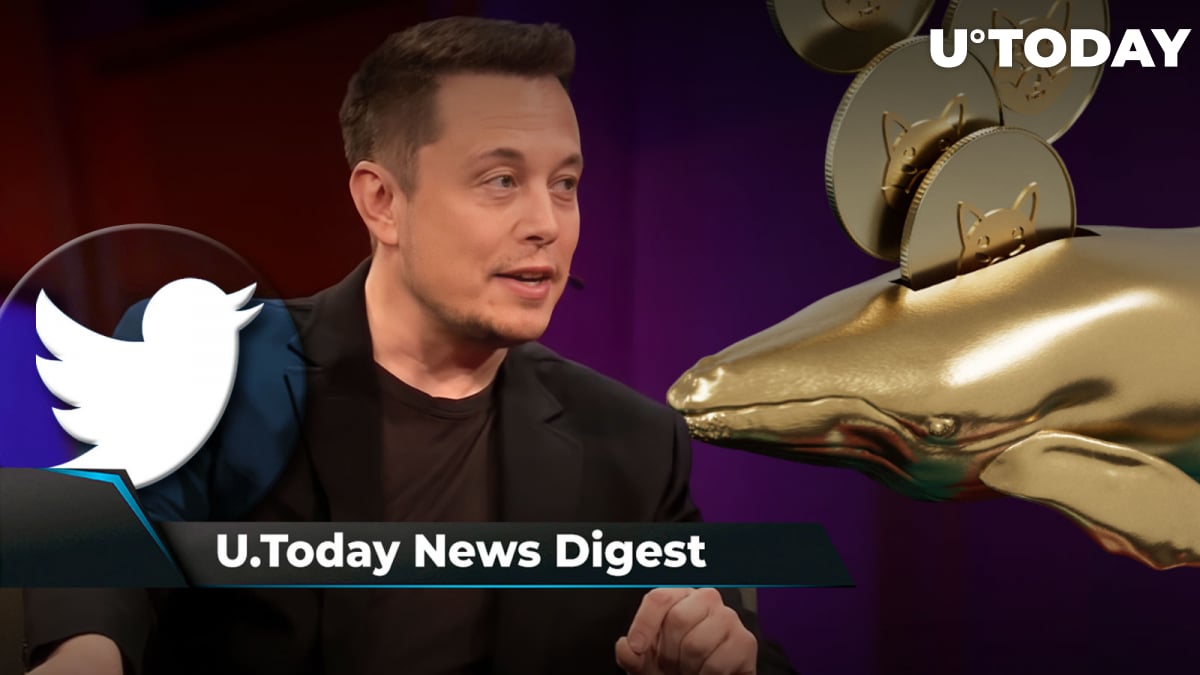 Take a look at what happened in the world of crypto over the weekend with U.Today’s top four news stories.

On Friday, Nov. 11, @TechEmails Twitter account released screenshots of Elon Musk and Michael Grimes’ (previously referred to as “Musk’s banker”) correspondence from April 25, 2022. According to the shared emails, FTX founder Sam Bankman-Fried reached out to the “Chief Twit” through Grimes to discuss their potential partnership regarding purchasing Twitter. According to Grimes, Bankman-Fried offered to invest from $1 to $5 billion in the acquisition deal and, once the platform is bought, to transition it to blockchain. Musk replied that “blockchain Twitter isn’t possible” as the P2P network cannot support the bandwidth and latency requirements. On Nov. 12, the centibillionaire confirmed that the screenshots were genuine, explaining that he rejected the FTX founder’s offer because he set off his “BS detector.”

As shared by WhaleStats crypto analytics portal, over the past weekend, ETH whales have sold more than $6.5 million worth of SHIB. However, the meme coin’s price remained relatively steady despite big sell-offs: SHIB was down only 6% against the dollar and 3.5% against Bitcoin. The top 100 Ethereum whales still own 8 trillion SHIB, which is currently worth $73.5 million and represents 1.5% of the Shiba Inu token offering. SHIB is now the third largest asset in this investor group's portfolio, trailing only Ethereum in various forms and stablecoins. Meanwhile, the sentiment around SHIB remains mixed: last week, it outperformed DOGE by almost 30%, but at the same time, SHIB’s price is falling and returning to the bottom. The meme coin is currently trading at $0.000009197.

The crypto community is now abuzz after an old video of Warren Buffett and Charlie Munger trashing crypto went viral on social media. In a video clip from 2018, Buffett claims that cryptocurrency draws a lot of charlatans who prey on people "who are trying to get rich because their neighbor’s getting rich." Munger supported Buffett’s opinion, calling cryptocurrency trading “disgusting.” Economist Stephen Geige, the person who posted the clip on his Twitter page, commented that Buffett and Munger “absolutely nailed it” while describing crypto, adding: “Turns out the old guys actually know what they’re talking about… who knew.” As reported by U.Today, Buffet famously said that crypto was “rat poison squared” back in May 2018, riling up the cryptocurrency community.

Paradigm, a VC firm that backs crypto and Web3 companies and protocols, has become the latest entity to support Ripple in its ongoing lawsuit. According to the firm, it requested with the court to file an amicus brief as it is concerned that the SEC’s rhetoric could have sweeping and unintended effects on Paradigm and others that seek to utilize the new technology in a way that could benefit users. In a document addressed to the court, Paradigm argued that the SEC's attempt to obtain new authority through the court was a regulatory overreach. Paradigm's main argument on XRP not being a security centered on the misapplication of the Howey test. It points out that a comprehensive study has confirmed that no federal appellate court has upheld that an asset that is the object of an investment contract transaction is itself a security.