EOS’s Ricky Shi: Could Governments Hold EOS by the Balls? I Don’t Think So

Masha Beetroot
Could governments hold EOS by the balls? EOS block producer shares his view on the future of the platform 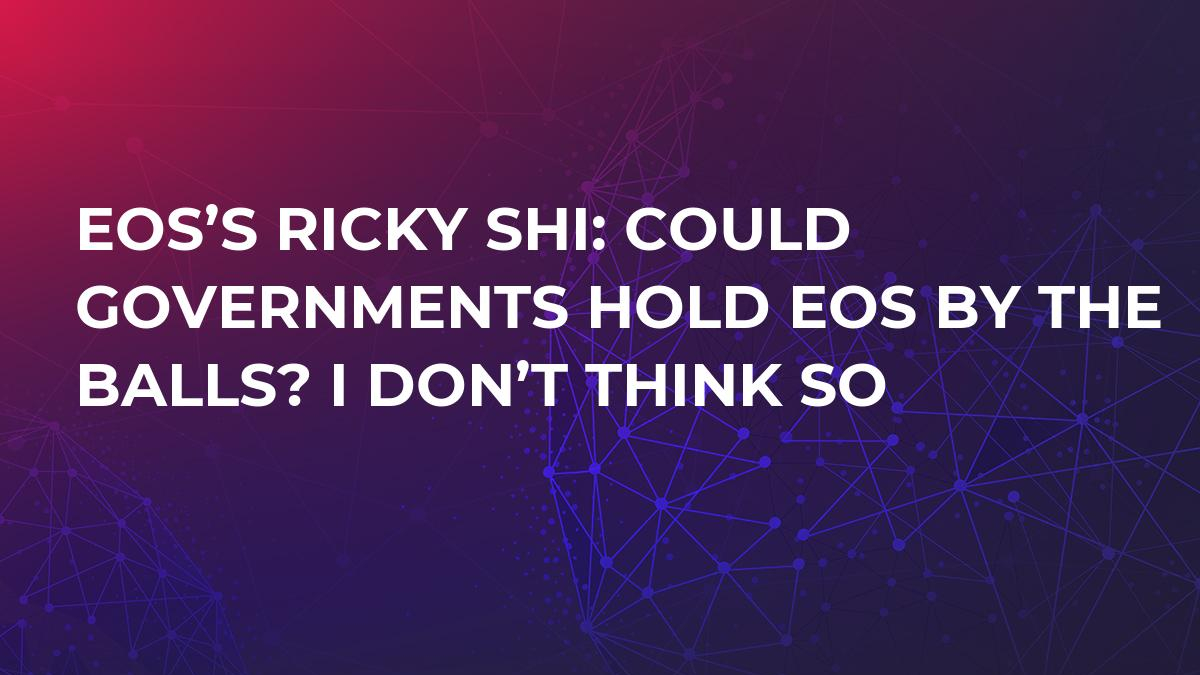 EOS, fondly referred to as Ethereum on Steroids, is tipped to emerge as one of the leading cryptocurrencies in the nearest future.

Ricky Shi, co-founder of EOS Cannon, gave us an exclusive interview touching the base on EOS approach to governance, the role of Block.one, building EOS community and ecosystem,  and the perspectives of  EOS.

A string of positive news is making EOS and EOS-related tokens a good investment. Founded in 2016 by Brendan Blumer and Daniel Larimer, EOS worked with Michael Novogratz and a known VC investor Christian Angermayer.

Recently Peter Thiel, a business partner of Angermayer and Bitmain’s founder Jihan Wu participated in the new fundraising round of the EOS backbone Block.one.

So far, EOS has been the basis mostly for development tools and some simple games. Nevertheless, the potential of this system is widely regarded as pretty high. For example, KickCoin (KICK), an ERC20 token for a crowdfunding platform, went up the charts when rumors hit the crypto market that the company negotiates with EOS Block Producers its possible migration from Ethereum to EOS.

CryptoComes: Critics often say that EOS is not, in fact, a decentralized network, but subject to control by something akin to a government. They specifically mention the recent decision by the EOS centralized body to ban transactions from the specific 27 wallet addresses. What would you respond to the critics?

Ricky Shi: Well, there is not anything akin to a government, otherwise it won’t take some long and so many community calls to make a collective decision to freeze these accounts.

CryptoComes: How will you describe the EOS approach to governance, on a scale between a totalitarian state and the complete anarchy?

RS: I would say 6, but right now 4. A few important governance pieces are not yet fully functional.

CryptoComes: Do you have a closed telegram group for 21 block producers or some similar venue for communication and making decisions?

RS: There is a mainnet BP telegram with 415 members if that is what you mean. There are weekly calls among top BPs to discuss and make decisions only related to BP part of duties.

CryptoComes: What is the role of Block.one now? What happens if some producers will join forces to challenge the principles ingrained by Block.one into the system?

RS: Block.one is one of the important contributing community members. Anyone can propose different ideas, but you need to get your voice heard, discussed and agreed upon (by vote, not by Block Producers) before there will be a change in the system.

CryptoComes: How big is the community you are working with? How will you describe it?

RS: 2,000+, a very active elite group with a deep appreciation of EOS principles and are all believers in EOS vision.

CryptoComes: What are your major principles in working with your community?

RS: The principles are simple: community first, tier by proof of stake, free will & free to join, communication & daily coaching.

CryptoComes: According to recent research, theft in the crypto industry is booming, with the volumes stolen this year times exceeding similar numbers in 2017. Can EOS tactics of fighting them be described by the words “scar them out”?

RS: Not exactly sure about the term. EOS has some design to prevent such loss. As for the EOS Cannon community, we coach our members to use the safest approach and developed our own version of offline wallet tools.

CryptoComes: Could the principle of the delegated proof of stake and on the whole the EOS consensus mechanism change with time?

RS: IMO, there will be adjustment at implementation level, but not in the principle.

CryptoComes: Are you a pragmatic or a moralist yourself as it comes to the community principles? Moralist means the man or principles, such as decentralization, and pragmatic is a person who may be more flexible if circumstances require immediate action and the principles stand in the way.

RS: I think I am a bit of both. Maybe more towards moralist a bit when a critical situation doesn’t demand an immediate pragmatic approach to resolve.

CryptoComes: Nick Szabo insists that the centralized aspect of EOS leaves the project vulnerable to attacks and security holes. Some say that by having or introducing centralized bodies, crypto platforms are bound to become more vulnerable to hostile regulation. What would you say to that?

RS: Then what would he say about the current government system we all live in? As for the more vulnerable part, I think we will see how it goes.

It is a great experiment in mankind history after all.

RS: Big exchanges are centralized. EOS has dPos and quite dispersed geographically. I don’t think so.

CryptoComes: What, if anything, needs to be changed in the EOS voting system?

CryptoComes: When do you think EOS will dethrone Ethereum, or it’s not on the current agenda?

RS: I don’t have a comparison or agenda there. Let us stay focus and make EOS better.

CryptoComes: With the lack of regulation, are the smart contract-based platforms simply preposterous for now?

RS: I don’t think so. It is in its infancy and needs time to evolve and mature.

AI and the future

CryptoComes: What is the place for AI and machine learning in future decentralized networks?

RS: IMO, it will be a natural marriage. But hold onto that idea before we have the supercomputer running at its full speed.

CryptoComes: What do you think of the future of EOS?

RS: Bright, promising and it is just the dawn!