The Price of Major Coins to Surge This Week — Can Bitcoin Stay over $4,000?

Jack Thomas
⚡??The cryptocurrency market looks prime for some movement this week, and a lot of analysts are predicting it to go up early on 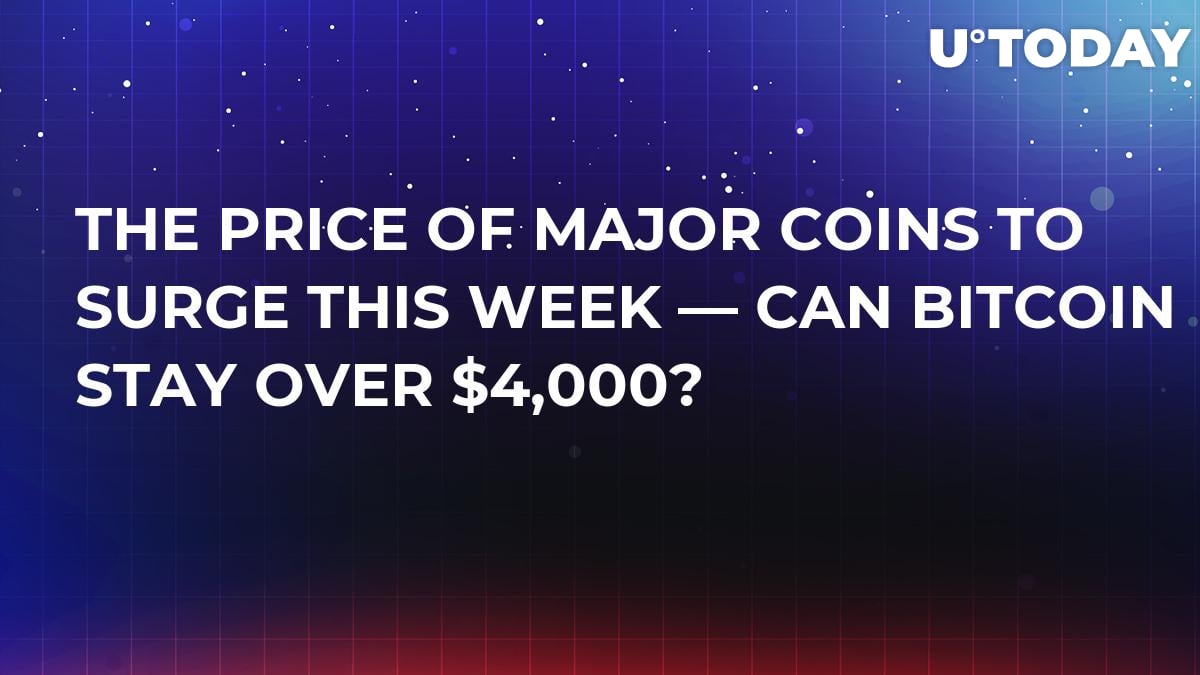 The past week or so has seen the cryptocurrency market move quite sideways, but with a definite small incline across most coins. Some have been rallying on their own, such as Stellar and its XLM token, as well as Binance Coin and Litecoin, but on average there has been nominal growth.

However, with this sideways movement there is always anticipation of the market whether breaking in an upwards direction, or indeed collapsing again. This time around, the sentiment change in the past month or so, and the feeling that the cryptocurrency winter is coming to an end, means that many analysts feel the next break will be upwards.

Market analysts believe that the market will continue to surge this week, and with Bitcoin a few dollars short of the $4,000 mark – should it cross there – it will all become about trying to keep the major cryptocurrency above this resistance point.

A look at certain coins

With the positive sentiment creeping in across the markets, a number of the top 20 coins have had substantial rallies, and more importantly, they have managed to keep hold a lot of their gains. Litecoin is once such token that managed to grow as much as 33 percent in a 24 period this month.

Others, like Binance Coin, have shown the value of a true and useful utility token as the coin continues to rally through most of 2019 on the back of good news from its parent exchange, Binance.

At the moment, heading into this new week, Stellar is up 12 percent as it continues to gain traction thanks to good adoption of the token when Germany media company Börsenmedien AG acquired Stellar-powered startup SatoshiPay.

A lot hinges on what Bitcoin can do this week, as it is very close to once again crossing the $4,000 mark after doing so in late February. The major cryptocurrency is managing to hold above the $3,900 mark, which bodes well for its next step to crack the strong resistance.

The last time Bitcoin went over $4,000 it only stayed there for around 24 hours before falling back down towards $3,800. If, however, it manages to break the mark, and stay above it for an extended period of time like other coins have managed to do with their own barriers, it could be a big surge for the cryptocurrency market.