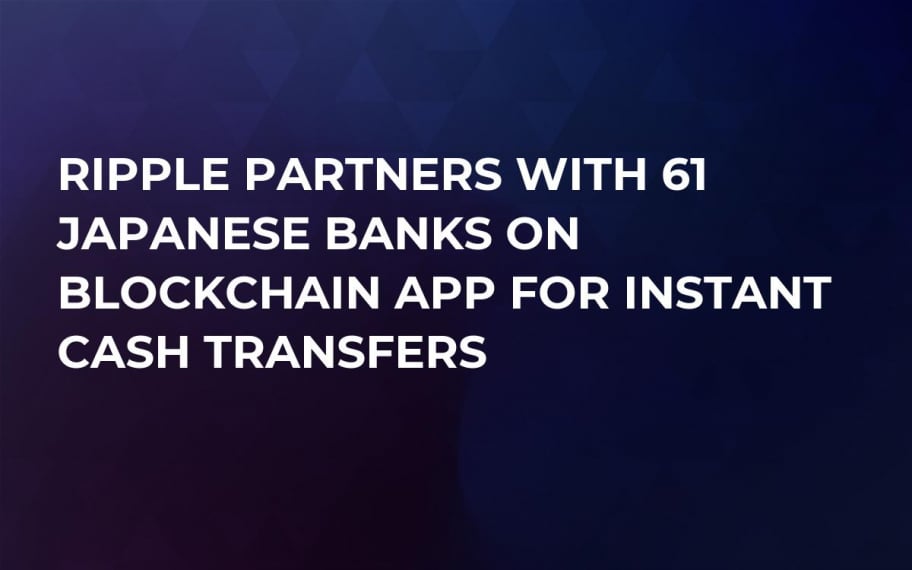 Ripple, known for its bank-facing cryptocurrency, is currently working with as many as 61 Japanese banks in order to bring forward a Blockchain application that will enable customers to settle cash transfers instantly.

It marks another step in Ripple aggregation of finance and Blockchain with the hopes being that the app will allow users to send funds to other bank accounts within Japan.

The company announced this week that Beta testing of the app will begin next month with three of the lenders, SBI Sumishin Net Bank Ltd., Suruga Bank Ltd. and Resona Bank Ltd., aiming to roll out the service to customers later this year.

Known as “MoneyTap,” the app is aimed at allowing the settling of transactions 24 hours a day, instantly, with the use of Blockchain technology. This is a major step for Japanese banking as domestic payments are limited in Japan. Transactions must occur on weekdays and between 8:30 a.m. and 3:30 p.m. or risk delays.

All that will be needed from the customer to make these instant payments is a bank account, phone number or QR code. Additionally, it is claimed by Ripple that because of their Blockchain the general transaction fees will be lower than that of the normal banks.

“We are proud to leverage Ripple’s Blockchain technology through our new mobile app, MoneyTap, to improve the payments infrastructure in Japan,” said Takashi Okita, CEO of SBI Ripple Asia.

“Together with the trust, reliability and reach of the bank consortium, we can remove friction from payments and create a faster, safer and more efficient domestic payments experience for our customers.”

In line with domestic and cross-border payments

Ripple’s long-term focus has been to streamline the banking system as it exists currently, rather than to fight against it like many other cryptocurrencies. To this end, they are also focusing on cross-border payments, but MoneyTap remains, for now, a domestic solution.

“The release of the MoneyTap mobile app shows Ripple’s continued commitment to providing its partners across Asia and the world with Blockchain-powered solutions that dramatically improve the customer payments journey,” said Emi Yoshikawa, director of joint venture partnerships at Ripple.