Queerest Bitcoin Forks So Far: ‘God’, ‘Pizza’, What Is Next? 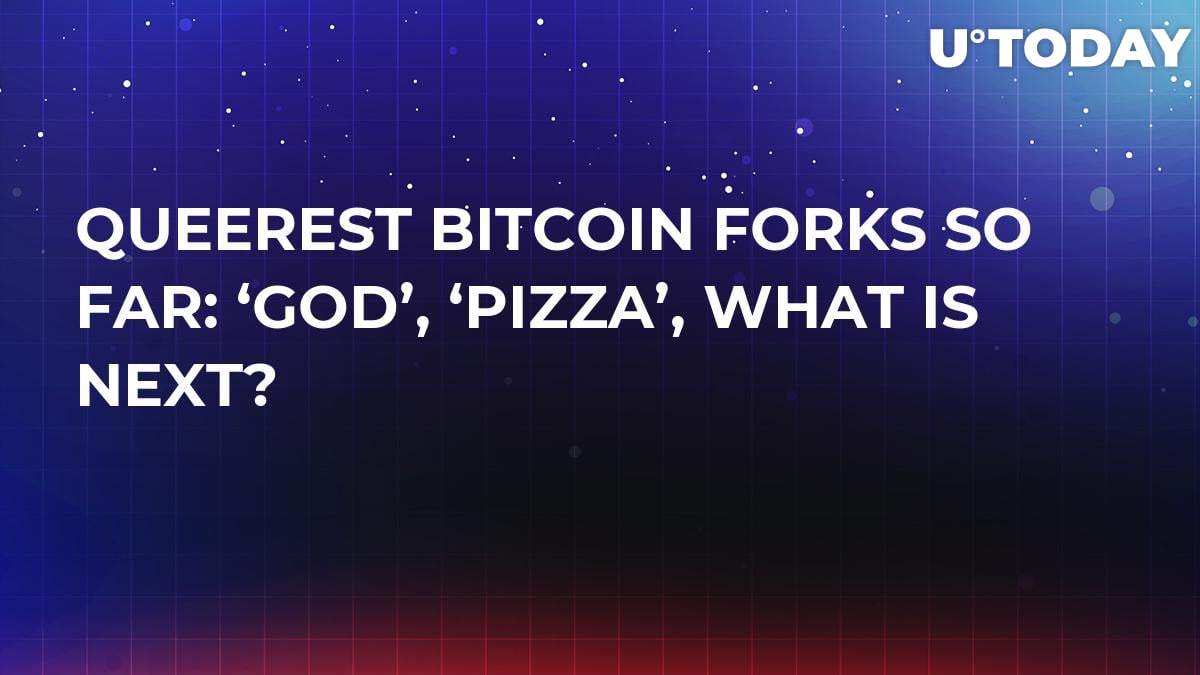 At the end of 2017, when the crypto market prices reached their peaks, and before 2018 shot off, several Bitcoin forks appeared. Some of them had quite peculiar titles. Back then, regulators banned some of ICOs, both promising and silly ones, platforms initiated forks of existing projects to ensure themselves interest and liquidity at an early stage.

Every project with a high potential is ‘balanced’ with a bad or silly one. Same goes for Bitcoin. In this story, we will go into three weirdest forks of Bitcoin, which either started off with ridiculously ambitious targets, doubtful and unrealistic aims to ‘save the world’ or those that large players just got over.

Bitcoin enthusiasts still remember it when BTC was actually used to buy something for the first time. It was two pizzas and they cost whole 10,000 BTC, which was really cheap back in 2010. Now we have a coin named Bitcoin Pizza (BPA).

The curious ambition of this fork is that the creators decided to introduce a directed acyclic graph into the Bitcoin structure. Byteball and IOTA use the same technology. Bitcoin Pizza gave its supporters tokens from an airdrop and then promised that they would be allowed to change them for official BPA coins later. However, Blockchain systems cannot be combined with directed acyclic graphs.

Bitcoin Pizza is now pretty much forgotten; their website has long been offline.

Funny as it may seem, initially Bitcoin God was planned to launch on Dec. 25, on Christmas Day.

The idea was that GOD users would vote how many tokens of this Blockchain charities may receive for free. 17 mln GOD coins were given to Bitcoin owners on a 1:1 ratio, 400,000 are intended to be used as rewards to miners (Proof-Of-Stake consensus protocol). 3.6 mln coins are going to be airdropped to charity organizations.

The coin still exists. It supports smart contracts and SegWit along with Lightning Network, and it is anonymous, like Zcash, Dash or Monero.

The coin looks interesting and technically advanced compared to some of its peers. However, the point of its existence with giving away a lot of its supply still raises questions from the crypto community.

Related
The Fight For Democracy in the Crypto Space

Despite the possible similarity to a GameBoy from the 90s that may leap to somebody’s mind, it has nothing to do with it.

BitcoinBoy (BCB) emerged as a result of a fork on Dec. 31, right on the New Year’s day at block height 501888. As was in the case of Bitcoin God, it implemented smart contracts and zero-knowledge proofs. BCB coins were lavishly spread around, and BTC holders got an exact amount of BCB to their BTC coins. Besides, BitcoinBoy introduced ‘built-in intelligent contracts’ for emitting assets on the Blockchain and for building dApps in order to ‘upgrade’ the BTC chain.

Bitcoin Cash claimed approximately the same targets and has been more successful in achieving them.