The Fight For Democracy in the Crypto Space

Darryn Pollock
Democracy, in terms of the Blockchain protocol is supposed to be a key feature, but as it stands there is more radicalism happening 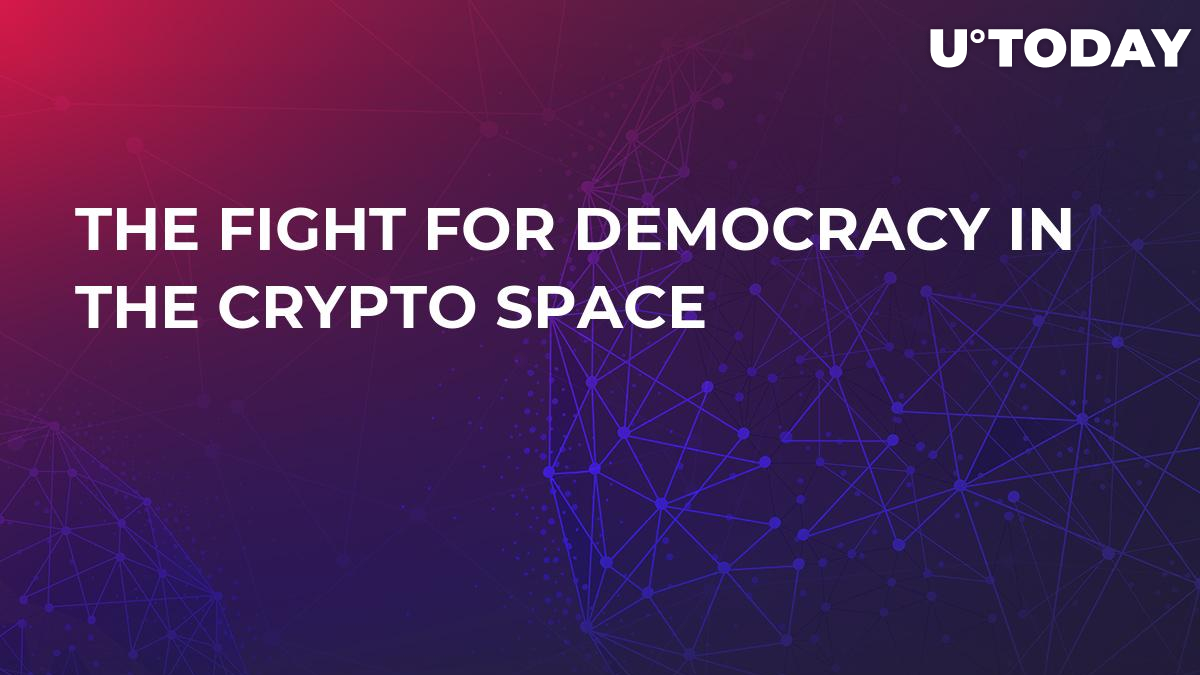 Democracy has been a core pillar of society since the days of the ancient Greeks, and since those days it has never abated, merely adjusted and evolved. The idea that the majority have the overall say transcends all facets of life and is an important and fair governance system.

Thus, because of its ability to quash any form of centralized and unfair control, it has also become an important part of Blockchain protocols and their decentralized nature. Governance of Blockchain, especially when it comes to Proof of Work and Delegated Proof-of-Stake, is based entirely on democracy.

However, democracy is not all in Blockchain, nor in general society, as there are a few ways in which to bend this governance system, and as such, we are seeing a new movement in the Blockchain space.

Blockchain governance and its democracy is starting to become far more radical rather than more inclusive and open as the space grows. However, for the cryptocurrency communities, the desire is now for a real working democracy on the human level welded with proper machine level. People want a fair democracy and this can happen when supported on the Blockchain protocol level.

One of the core thoughts of Francis Fukuyama in his 1992 book "The End of History and the Last Man" was that democracy was the final form of human governance and that it was easier to see a radical converting to a Democrat than vice versa. But time proved he was wrong.

But, he also added: "What we may be witnessing … is the end point of mankind's ideological evolution and the universalization of Western liberal democracy as the final form of human government,” leading us to believe that no further improvements are left to be made upon democracy.

Now, in the Blockchain space, we have seen a rapid microcosm of democracy and its evolution. Blockchains, in their original form, such as Bitcoin and its Proof-of-Work algorithm, proved a democratic standing as crypto-anarchists worked in communities.

Anyone who supported the Bitcoin network early on was given a chance to gain more Bitcoins through the PoW algorithm. People received fair rewards for being part of the network and keeping it live. A fair reward for fair effort.

This was then later done differently, but under the same principles when Dan Larimer proposed and implemented the Delegated Proof-of-Stake (dPoS) algorithm, such as in EOS. The idea behind dPoS was voting and democracy. Also a fair system.

EOS’s developers say that by delegating the responsibility for processing transactions to just 21 “block producers,” which are to be elected by the community of token holders, the system will be able to achieve thousands of transactions per second (compared with just 15 per second for rival Ethereum).

These basic principles of democracy in PoW and dPoS are enshrined in order to enact a fair system for communities to operate democratically. However, through the nine years of Blockchain being in existence, the growth of the space has led to a degeneration to radicalism, and even in the newer dPoS system, we are already seeing a movement away from democracy, counter to what Fukuyama predicted.

Blockchain’s protocol and its democracy underlying it comes from an important key feature of cryptocurrencies in general, the decentralization and the removal of centralized authorities. Thus, it is understandable why there is such an importance placed on democracy in the Blockchain protocol.

“Over the last half-decade, each of us has, in his own way, been working on a part of an alternative solution: to find ways to harness markets and technology to radically decentralized power of all sorts and shift our reliance from authority and to formal rules.”

He further continues that, Bitcoin and other cryptocurrencies emerged directly as a reaction to the perceived excesses of the traditional financial system.

Democracy may be an essential facet of Blockchain, but it is also key as to how it works. An easy example is provided by Josh Zerlan, VP of Product Development at Butterfly Lab:

“There are thousands of miners around the world, all collectively trying to process various transactions. Although not widely utilized currently, miners have the ability to accept or reject certain transactions. They can choose to refuse to process transactions. Let’s think about that for a moment. An individual miner can choose to not process a transaction, but someone else will, therefore that individual miner’s choice doesn’t make a lot of difference. <...> But what if more than half the miners decided to stop processing transactions from an entity they disagree with? Now the choice of those miners has an impact. If more than half of the network decides something does not belong on the network, the transactions will never make it into the blockchain, effectively being ignored by the bitcoin universe.”

While the democracy in the Blockchains may be moving towards radicalization, it is important to remember why these key democratic features are prevalent and abound.

The grassroots movement and drive is there and it’s strong — projects like Telos and UCOMMUNITY fork the EOS code to create their own consensus algorithms with the objective of fair distribution and voting rights. We are going to see more and more movement in this direction.

The want and ability to have democracy

It is dangerous for those involved in the Blockchain space to become too radical and to leave out democracy as a core concept in the space. There is indeed a fight going on for democracy in blockchain, and with this fight, people are showing that they do indeed want a fair democracy and this can happen when supported on the Blockchain protocol level.

Related
The ‘Blockchain Over Bitcoin’ Narrative- Can They be Separated?