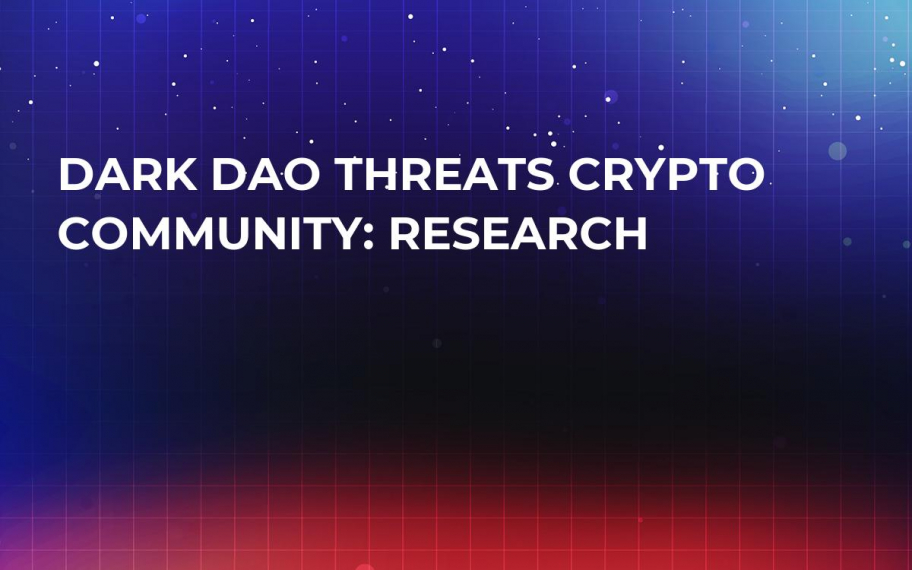 The research came out last week and the main threat to public Blockchain voting is described in it as a “dark DAO”– decentralized autonomous organization.

The research team of Cornell University describes a dark DAO as an organization that implements smart contracts or buys users votes. Its goal is to take over the systems of platform governing, produce false signals or start manipulating the market.

The researchers believe that such an attack if conducted would produce far-going consequences regarding any crypto project it is turned against. Mainly it is a threat to platforms where decision making is voted for with the coins of the blockchain.

Specific projects could be in danger

These attacks can be used against a big number of virtual assets, even big ones, the valuation of which counts in billions.

Such projects include the well-famous EOS, Polkadot and TRON. They are all performing one or another type of Blockchain voting in order to make the decision making on their platforms more formal.

Some of these Blockchains have implemented the so-called“delegated proof-of-stake” technology. It means that they need to elect several nodes which will verify their transactions. So holders can vote using the coins of the corresponding projects that they own.

Other crypto companies try to solve the issues with governance by letting stakeholders vote on technical issues. However, these experiments have ended in dead-ends for their teams.

Still, the researchers believe, a dark DAO could bring chaos and the damage would be much bigger than in previous times– when a hacker attacked the Ethereum DAO in 2016 and took out 3.6 mln ETH.

The report emphasizes that current Blockchain election systems are vulnerable and that everyone must be aware of this.

The co-founder of Ethereum Vitalik Buterin and one of his colleagues Vlad Zamfir have stepped out against on-chain voting methods publicly, saying that those participants win who own a large number of coins.

The authors of the research agree with them, saying that present Blockchain companies are choosing the easiest forms of voting, ignoring past experience.

The research paper points out that a dark DAO takes advantage of “trusted hardware” that such elections use. With this hardware, the verification takes place in a private setting and the researchers believe that this system can enable hackers to take part in staying unnoticed.

For the same reason, the votes which were manipulated, will not be identified either.

This dark DAO first can give orders to its members to start gradually buying coins of a certain platform and then as a certain amount is collected, the management will tell the members to short the coin.

Other types of attacks can include a so-called bribery attack. In this case, a smart contract just purchases votes off holders and it does so publicly or in a private manner.

The researchers insist that often since Blockchain networks can communicate between each other, these attacks based on incentives can happen more often.

What’s the way out?

At the moment, the report says, crypto teams and scientists are doing their best to find a solution to this problem since this is a threat to both on-chain and off-chain voting.

So far, the only protection against these attacks is the number of coins necessary to change the course of an election, i.e. to make such an attack more expensive to perform.

The authors of the research are now working on another article, where they are talking about other suitable and even better ways to reduce the chances of such attacks if not eliminate them completely.

The voting for validators for these two platforms are going at the moment. However, there are restrictions connected with freezing coins that slow down the voting not allowing a large number of users to vote at a time. This is why the elections for TRON and EOS are taking so long.

Despite the abovementioned report, a lot of crypto sphere reps are in doubt, whether such a dark DAO can exist at all, saying that since the hack of the Ethereum DAO little has been added to the basic smart contract mechanisms, so the chances of creating a “dark DAO” are very low.