For Bitcoin to Become a Revolution, it Needs its ‘Dot Com Crash’ Moment

Darryn Pollock
Whenever there is a crash, panic ensues from those who probably should not be involved in Bitcoin to begin with. 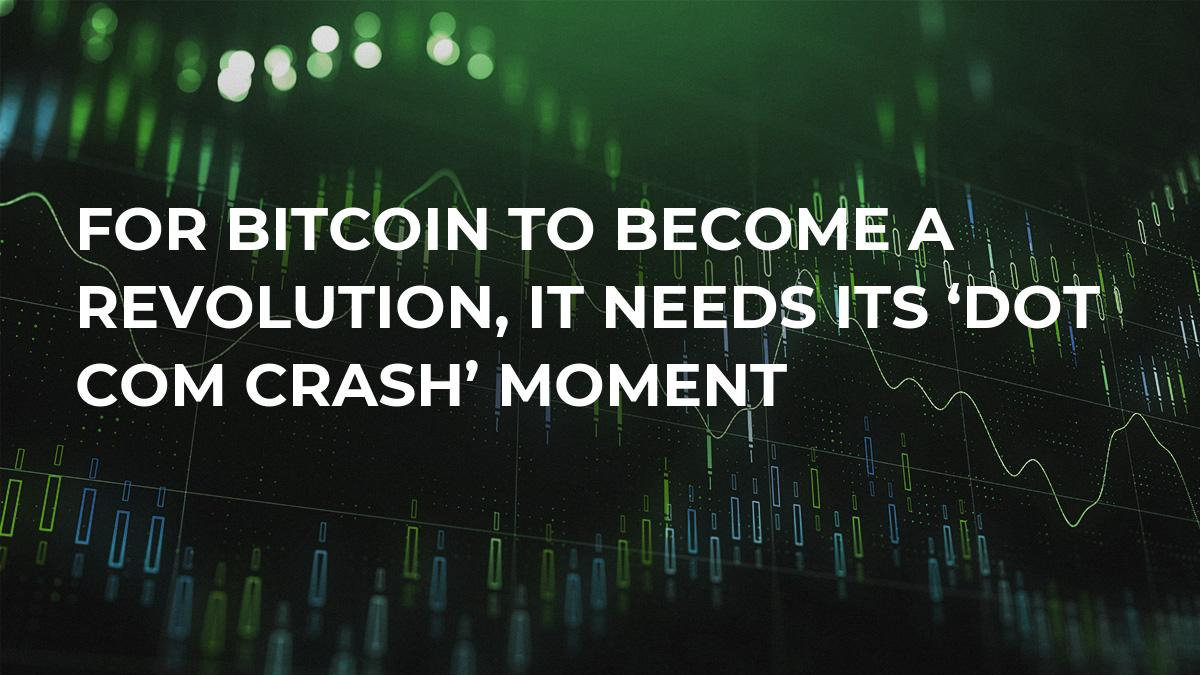 In the dotcom era we watched a promising, but undeveloped, unregulated and open technology called “the internet” result in massive exuberance, fraud and an epic bull run, that was immediately followed by a complete collapse and loss of wealth." February 6, 2018 https://twitter.com/Jason/status/960775425113841664

This tweet sums up my thoughts precisely. Blockchain technology, cryptocurrency, digital tokens, even ICOs and their disruption of the VC market, these are all waves of new technology that have the power to change the way we exist on this planet.

However, Bitcoin and its affiliates, are in their embryonic stages, although quickly evolving, and while people get to grips with the technology behind them, there is this phase of early adoption that is giving a big pay off.

The issue is that people who are uninterested in the whole picture are honing in on the payoff, they are looking at Bitcoin with dollar signs in their eyes and ignoring everything else.

This is leading to some stupid decisions being made, and the shaping of the ecosystem is getting skewed towards these money grabbers. The foundation of the crypto community is starting to be built upon a massive and shaky base of speculative investors.

On the one hand, this has fueled the growth of the Bitcoin market, but the tower which has been built can come crashing down. And on the other hand, that crash could be the best thing for this technology.

Back the tech, not the currency

Now, I am not saying, like many other big banks and centralized systems that Blockchain is the answer and it should be separated from the digital tokens. What I am saying though is people who are entering the crypto community need to be appreciative of the technology and the potential it has to be a disruptive force.

Way back when the white paper was written, their foundations were there for a technology that could change the face of finance, the banking system and the hegemony that was held by centralized money systems.

That message has been diluted as not only the Bitcoin community pushed the digital coin away from its primary function, they have pushed it to be a store of value, which is a move motivated by greed.

Shake out the weak and damaging hands

There need to be a few big changes in Bitcoin for it to get back on track and to be able to match the Internet as a force for change going forward. One of those is that it needs to sort out its scaling issue, in order to move towards being a functional currency, but it also needs to shake off some of the deadweight.

The run up to it's all-time-high was epitomized by a wave of true mainstream adoption. The word Bitcoin was on the lips of cab drivers, hairdressers, doctors and garbage men alike; everyone wanted to know what this magical growing asset was all about.

However, it was less about educating themselves than finding out a way to double an investment in a few days. They bought in, with ease thanks to cryptocurrencies all-inclusive nature, but did not understand what they were buying into, moving more in a speculative direction.

When Bitcoin bucked recently, changing direction sharply in a downward spiral, those speculators were well shaken up, and a mass evacuation occurred which helped the knife fall further and faster.

However, this is not necessarily a bad thing. Those who screamed bubble as they exited sharply were never in it for the right reasons. Those who merely shrugged and rode the lightning, making no moves to exit are now the ones who remain and the ones that will build Bitcoin to be a force in the coming years.

It is funny to think that in the Dot Com bubble burst people were declaring this ‘Internet thing’ a scam and a fraud, and celebrating its demise and supposed death. However, it was the speculators and get-rich-quicksters that were merely making room for those who saw the promise.

Bitcoin has shook a lot of the first from its base, but it could still do with another big Dot Com level pop in order for it to grow its full potential.