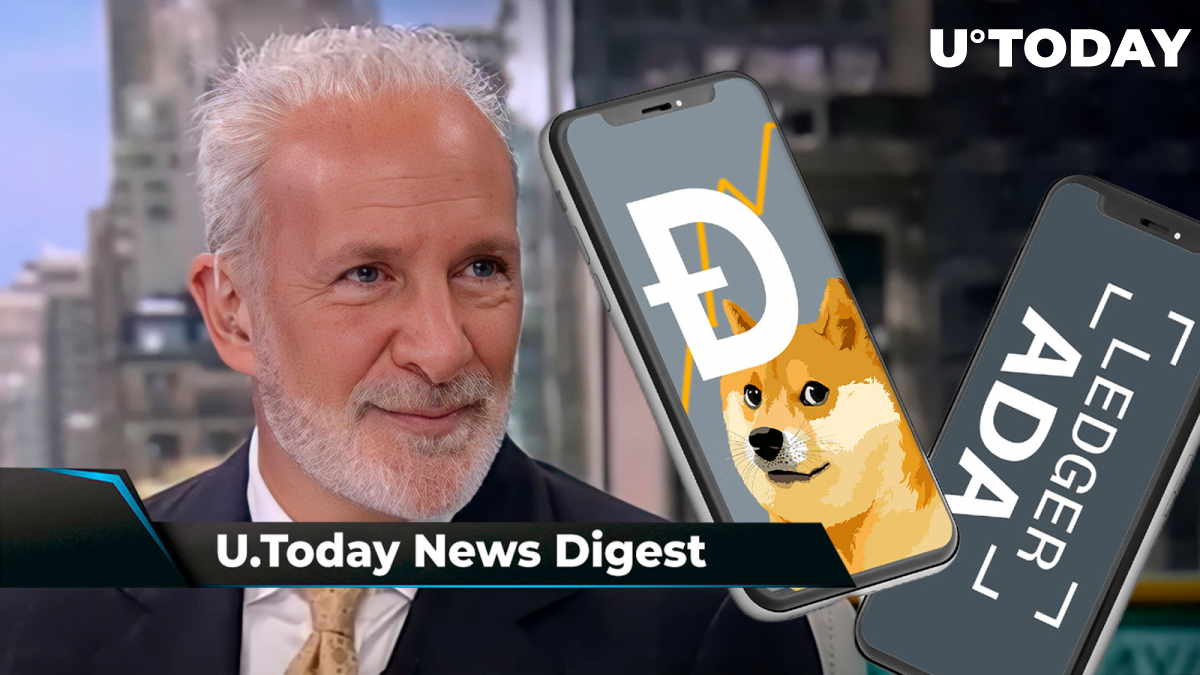 As the market sees Ethereum’s price going down, Peter Schiff took to Twitter to show off his far-sightedness, since the bearish prediction he made three weeks ago has come true. Back then, he wrote about an "ominous combination" for Ether, sharing a chart with a bearish Double Top pattern that contained a Head & Shoulders top. Schiff expected the second biggest cryptocurrency to drop to the $1,000 level, which is exactly what is happening now. He went on to say that those who are holding ETH near $1,200 and did not sell it earlier should blame themselves for their losses. At the moment, Ethereum is changing hands at $1,110, down 3% over the past 24 hours.

Dogecoin set to launch another major project, here are details

Dogecoin developer Michi Lumin has recently shared that Libdogecoin (the building block for creating Dogecoin projects) might soon launch in v0.1. @mishaboar, a prominent member of the Dogecoin community, wrote in his recent post that Libdogecoin will essentially be a library that will allow building for Doge without having to deal with low-level implementation. In recent months, the project’s team has focused on providing the groundwork for RadioDoge, Gigawallet, as well as many future projects through the first phase of Libdogecoin. RadioDoge focuses on using low-cost radio technology (HF/LoRaWAN) and the Starlink satellite network to provide cheap, wide-scale access to Dogecoin. GigaWallet aims to provide a publicly available drop-in solution for internet-based trading and tipping.

According to a post by Ledger, a cryptocurrency hardware wallet provider, the moment all ADA holders have long been waiting for has arrived: Cardano finally landed in the Ledger Live app. From now on, users will be able to send, receive, buy and manage ADA directly with Ledger Live. With ADA’s much-awaited integration, the top 10 ranked coins in terms of market cap are now all supported in your Ledger Live app. Cardano presently ranks seventh largest, with a market capitalization of $15.4 billion. As reported by U.Today, in April, Ledger released version 4.0.0 of the Cardano app for Ledger wallets compatible with smart contracts.

MicroStrategy chief Michael Saylor has recently been interviewed by CNBC about the current situation with his company and the huge investment it has made in BTC since August 2020. According to Saylor, since that time, Bitcoin has performed 10 times better than any other asset, mentioning the S&P 500, gold and the Nasdaq 100 index. He also stated that BTC is a risk-off store of value asset for a long-time-frame investment, adding that “nobody has ever lost money investing in Bitcoin for four years.” Saylor believes that, for Bitcoin, the $21,685 level is a simple moving average for a period of four years. BTC has only touched this level a few times in its history, and it has done it now. So, Saylor has called this price level “a great buying opportunity” and “an ideal entry point.”