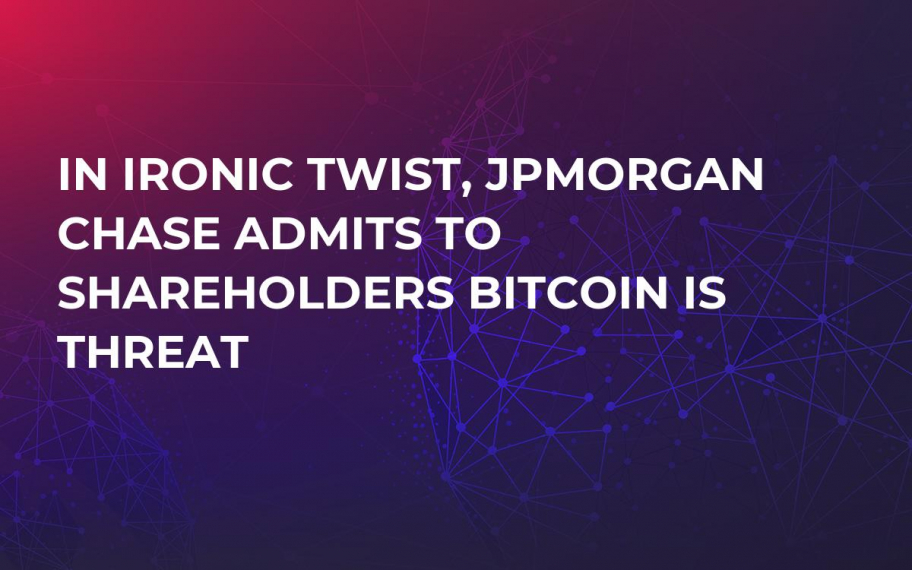 JPMorgan Chase has joined rival Bank of America in citing cryptocurrencies like Bitcoin as risk factors to its business. In the company’s annual report, JPMorgan Chase indicated that digital currencies could cut out intermediaries like banks, as users will be able to transfer value in a peer-to-peer (p2p) fashion. Specifically, the report states:

“Both financial institutions and their non-banking competitors face the risk that payment processing and other services could be disrupted by technologies, such as cryptocurrencies, that require no intermediation.”

The report also acknowledges that competition from cryptocurrencies could force the bank to lower its fees:

“Ongoing or increased competition may put downward pressure on prices and fees for JPMorgan Chase’s products and services or may cause JPMorgan Chase to lose market share.”

The admission by megabanks such as Chase, with a $400 bln market cap, and Bank of America, with a $330 bln market cap that digital currency is a thread has certainly turned heads. What’s even better, for cryptocurrency enthusiasts, is that JP Morgan Chase CEO Jamie Dimon has had to eat crow.

Dimon made headlines last fall when he decried Bitcoin as a “fraud,” saying, among other things:

“It's just not a real thing, eventually it will be closed.”

Such commentary is a far cry from today’s admission that digital currency is a threat to Chase’s business. When asked his opinion of Dimon, Circle CEO Jeremy Allaire replied:

“I don’t know who the CEO of Sears was back in the mid-’90s, but I bet that CEO was making remarks about Internet shopping that were pretty dismissive. Maybe in 20 years, no one will know who Jamie Dimon is.”

Opinions about cryptocurrency are changing inside the megabank, with Chase being one of the first banks to join the Ethereum Enterprise Alliance. Recently, Chase released a 71-page report on Bitcoin, Ripple and other digital currencies, saying, in part:

“Opportunities for banks to utilize Blockchain technologies for conducting business could have far-reaching implications for the sector in our view.”

“[Blockchain] is more than thriving. People have been surprised how quickly it basically spread as a way to address and think about customers differently. It’s quite insane.”