David Dinkins
The resignation of a key Ethereum developer has called greater attention, most of it negative, to a proposal to enable recovery of stolen funds on the Ethereum Blockchain. 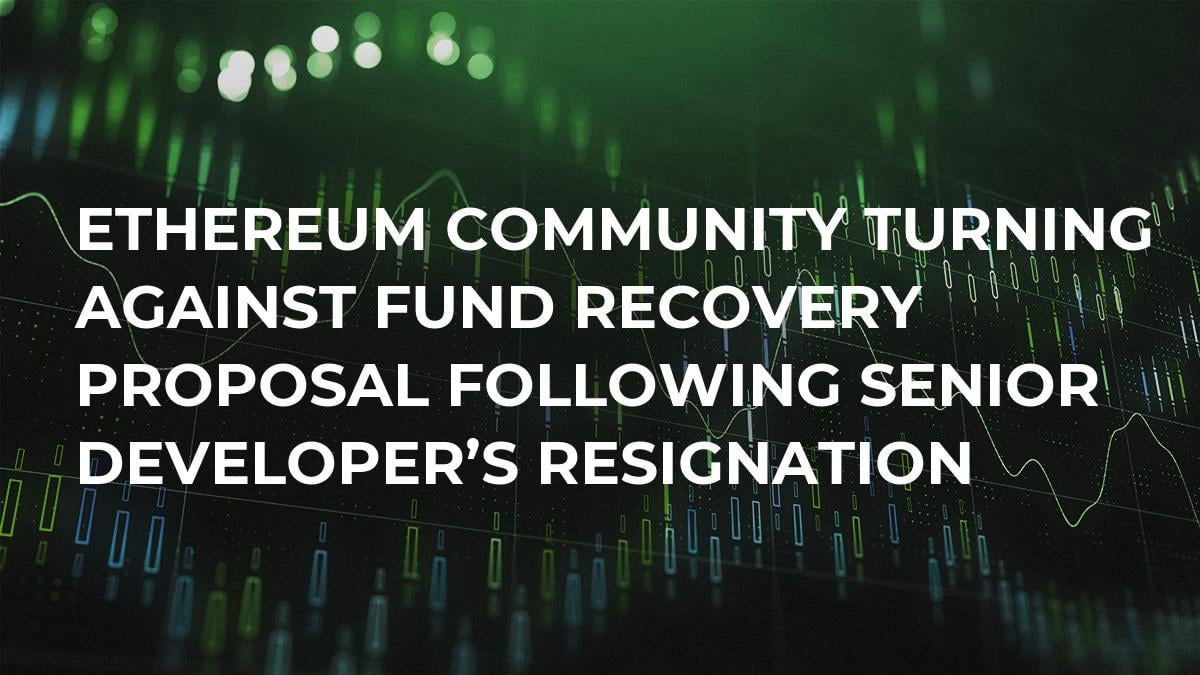 The Ethereum community, for now, appears to be overwhelmingly rejecting a proposal to allow the recovery of hacked funds. Ethereum Improvement Proposal (EIP) 867 proposes a mechanism to do “state changes” on the Ethereum network, which is essentially a method of altering past transaction history. EIP 867 is being championed by an ICO, Musiconomi, which lost over 16,000 Ether in the Parity wallet hack last year.

An Ethereum Improvement Proposal is an idea to improve some aspect of the Ethereum network or software. EIP-1 outlines the process for acceptance of an EIP. First, somebody must come up with an idea for an improvement to Ethereum, present the idea to the community and find a champion. The champion will create a formal EIP which complies with the formatting guidelines set out in EIP-1. The proposed EIP will be submitted using a pull request on GitHub.

Once the community has had a chance to comment on the proposal, the EIP Editor can either accept, reject or defer the proposed EIP. If accepted, the implementation code must be written and once that’s done, if it still seems like a good idea, the code will be merged into Ethereum.

Not the right way?

Ethereum’s senior developers have been reluctant to get behind the idea of EIP 867 without significantly more input from the community. One of them, Vlad Zamfir, said:

These proposals, especially proposals that do set important precedents, that impact the relation of the community and the platform, I think need to be subject to a public debate that I'm not actually sure the EIP process is designed to handle.

Ethereum’s community manager Hudson Jameson believes the EIP should be debated on social media to give time for a consensus to emerge. Another developer is calling for a video debate between advocates of the proposal and its detractors.

Last week, one of the six developers with the rights to merge code into Ethereum, resigned in opposition to EIP 867. Yoichi Hirai, who has contributed more than 5,000 code changes to Ethereum in the last year, resigned following his rejection of EIP 867. Hirai rejected the EIP as being “at odds with the Ethereum philosophy.”

Upon further consideration, Hirai came to the conclusion that EIP 867 would violate a Japanese law called “Unauthorized Creation of Electromagnetic Records.” Hirai wrote on GitHub:

Reading legislation and performing something is already beyond my capacities. I didn't realize that the EIP editorship requires this ability. Now I suspect it does, and that's not what I can offer. Some EIP editors look nonchalant about legal consequences of this draft, but I have warned them, and I have no capacities to do anything more than warn them...I resign from the post of an EIP editor.

Following Hirai’s resignation, the tide in Ethereum’s community seems to have turned against EIP 867. Users have submitted dozens of comments in the last 24 hours, most of which vehemently decry the rollback proposal as being antithetical to Ethereum’s philosophy.

100% opposed to this EIP it's very damaging to the future of Ethereum.

I can't believe this is even getting considered. This is a complete disgrace to the Ethereum community, and Blockchain as a whole.