Alexander Goborov
A scientific study commissioned by Ethereum’s partners claims that EOS is not the company it says it is, but can we know for sure? 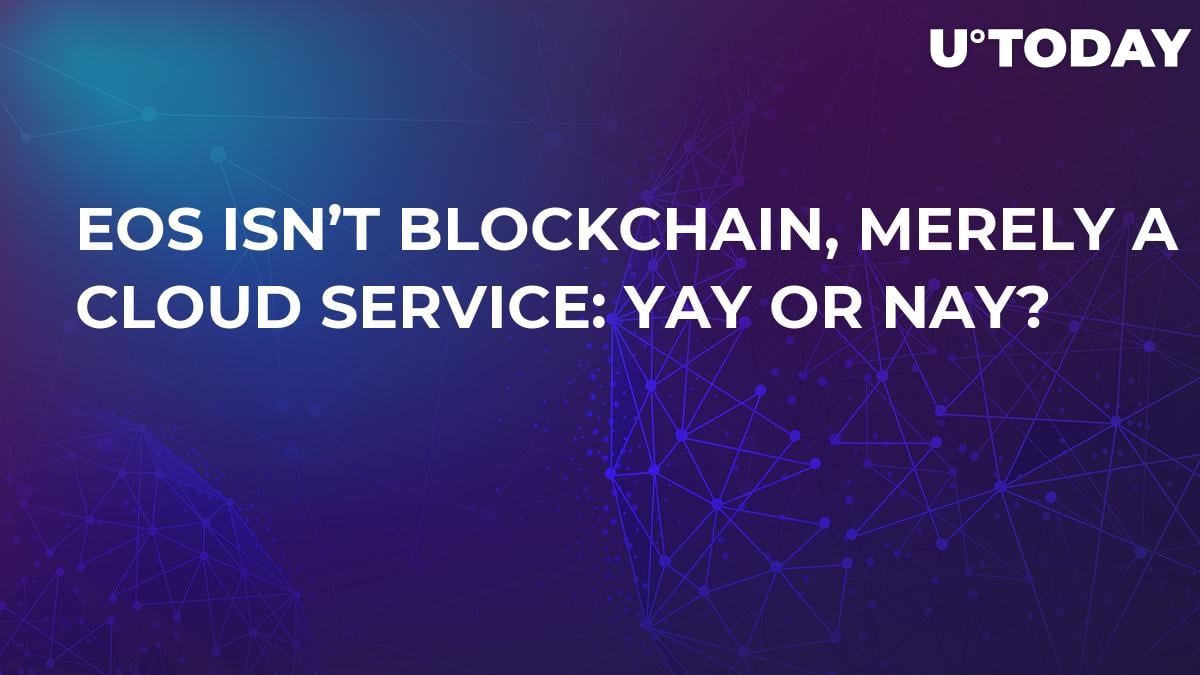 EOS is one of the current leaders of the crypto market. Standing at roughly 5.50 USD per each EOS token, as of right now, it is in the top five cryptocurrencies by market capitalization with close to 5 billion USD following Bitcoin, Ethereum, Ripple, and Bitcoin Cash. Very recently, however, there have been claims that EOS is not actually a decentralized Blockchain-based platform (accordingly, nor is its token) but actually a very centralized cloud service. With so much technology and information hidden behind closed doors, this could, hypothetically speaking, be a valid claim. But before jumping to any rushed conclusions, let us first quickly examine the evidence and get a little bit of history.

The EOS platform along with its native cryptocurrency is a relatively new creation which emerged on the market as a post-test alpha version only in the winter of this year. Because of this and the nature of the market itself, the EOS token has been demonstrating a substantial amount of volatility: its price was four times the current price just six months ago, at the end of April. However, the token’s overall grip on the market remains firm.

One of the key people behind the creation of EOS is the 32-year-old native of Iowa now based in Hong Kong, Brendan Blumer (by now a crypto millionaire), who facilitated the creation of EOS together with the programmer Daniel Larimer through their software development company Block.one, unsurprisingly based in the tax-free haven of Cayman Islands.

EOS pretty much followed the usual pattern, but did so swimmingly. First, even prior to launching the EOS platform, Block.one distributed a billion of its ERC-20 certified tokens onto the market through the Ethereum Blockchain.

The next phase was the infamous Initial Coin Offering (ICO), essentially a public sale of the crypto product-to-be to investors, during which a staggering total of 4 billion USD was raised in addition to the one billion USD collected from token sales. The ICO portion of the launch was heavily criticized in the Wall Street Journal, who called it a “coin with no purpose” demanding needlessly astronomical sums in support.

Whatever criticisms may come their way, EOS did manage to catapult themselves right onto the top floor of the crypto skyscraper, and it doesn’t look like it was a fluke, but rather a well thought-through strategy coupled with the supreme technological know-how.

Commissioned Research and the Big Claim

The most recent criticism claiming that EOS is not a Blockchain company but more of a cloud-storing service (i.e. “a distributed database system”) is actually coming from people intimately tied to Ethereum. The research inquiry was commissioned by the New York-based company ConsenSys founded by the Canadian entrepreneur Joseph Lubin in 2015 for the sole purpose of writing software for decentralized services to be run on the Ethereum Blockchain. The company that actually carried out the research is called Whiteblock, based in Los Angeles, with Whiteblock’s CTO (Chief Technology Officer), Zac Cole, acting as one of the authors of the report.

So, with the scientific research having been requested by the company whose very slogan is “Harness the Power of Ethereum”, this does seem a little like an attempt to discredit a serious rival, especially in light of the fact that EOS initially used Ethereum as a springboard to launch itself before parting ways with the Vitaliks. Whether this is crypto vengeance, competition, or simply solid computer science, let us look at some of the actual claims of the study:

“The research results prove the inaccuracies in performance claims and concluded that the foundation of the EOS system is built on a flawed model that is not truly decentralized.”

“The ability to undo history (or anything for that matter) related to state is a notion that directly conflicts with the essential definition of what can be considered a blockchain, which is characterized by immutability of data.”

“EOS is not a blockchain, rather a distributed homogeneous database management system, a clear distinction in that their transactions are not cryptographically validated.”

Conclusion Follows, or Does It?

All commotion aside, one must be a true expert in the field of Blockchain programming and have all of the facts at hand in order to offer a worthy comment on the scientific side of the study. As a result, drawing a formal conclusion appears to be, largely, an immature enterprise. At the very least, we need an official spokesperson from EOS to respond, and, better yet, another independent group of researchers, not funded by any company with a vested interest, to recreate and validate the study’s findings.

In a recent interview with CCN, Cole claimed that his team of researchers at Whiteblock was not comprised of EOS people, nor Ethereum people, but simply Blockchain people, stipulating that the intent of their research “wasn’t to prove that one was better than the other but rather provide an objective scientific analysis.” Cole also stated that their research had been funded by 20 different companies, not just the Ethereum-backed ConsenSys. Be that as it may, we should add that the other, non-Whiteblock researchers on the paper happen to be from Vulcan Labs and are, in fact, ConsenSys’s employees.

Whatever the claims, either in the paper itself or in regards to how or why the idea for this research emerged in the first place, it is reasonable to suppose that the study Whiteblock and ConsenSys have offered is worth examining: there may, indeed, be something in it. Nevertheless, how much of it is true―and in science, truth is only what can be shown legit many times over―still remains to be seen. For now, preparing but ultimately holding one’s judgement may the noblest thing to do.