The Ridiculously Centralized World of Crypto

Cyril Gilson
Cryptocurrencies decentralized nature is becoming more and more theoretical, whereas, in practice, it is an incredibly centralized space dominated by a few men 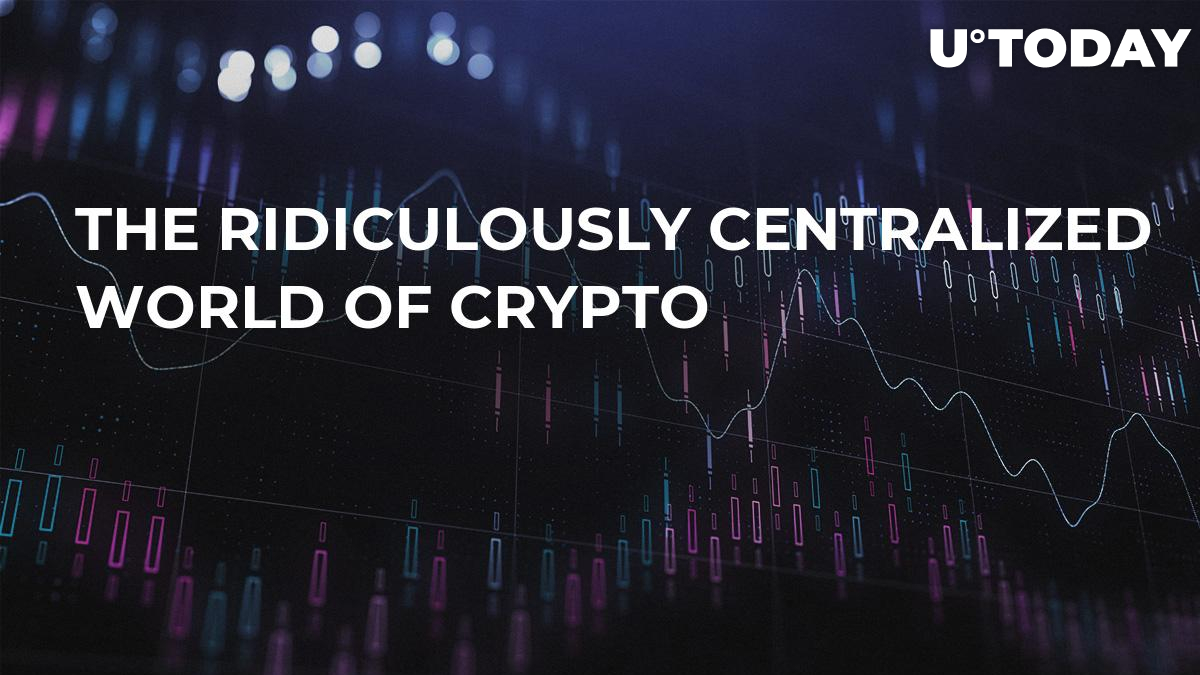 Brandon Chez is a thirty-something old programmer allegedly living in New York. His name is not immediately recognizable, yet the domain name that Brandon owns and the website he maintains and controls is the gravitational center of the universe of cryptocurrencies.

In January, the site decided to expel South Korean exchanges from its listings, without a warning or any sort of orchestration. As a result, the whole crypto market capitalization fell some 20 percent, and the panic spread, leading to a big sell-off by uninformed traders.

In fact, any moves by CoinMarketCap play a big role in how the markets behave. The ranking system of CoinMarketCap has often been called into question, as its effect can greatly affect things too. The calculation of circulating supply is vital information, yet the way in which it is calculated is shrouded in mystery, and often could be erroneous. Any change in the value of the circulating supply of any project has a direct effect on the capitalization of the project and on the price of the project's coin. Direct, immediate effect.

The speculative nature of the cryptocurrency market and the high competition between coins for investors mean that knowledge and information is king. Information centers like CoinMarketCap has such a strong hold on certain sectors and coins that could be considered virtually indispensable. And yet, they are also incredibly centralized!

But what about the three pillars of Blockchain and cryptocurrencies which are supposed to be transparency, anonymity and decentralization? These are the factors that have made this new technology so enticing in the first place, attracting millions of individuals making their headway in a digitized world largely controlled by overbearing big corporations.

The decentralized nature of cryptocurrencies was intended to give power back to the common man. No longer does your money have to be controlled by an intermediary or a centralized structure like a bank; Blockchain was supposed to be an ultimate middleman to end all middlemen.

The Blockchain and crypto space is getting bigger by the hour and it’s a network of communities consisting of independent individuals. The communities do actually strive to be as decentralized and transparent as possible and work with what they have - from settling in at various crypto subreddits like r/cryptocurrency and introducing public moderation logs for transparency to building their own platforms like U°Community.

They now feel a part of this important decentralized movement as they take power away from the centralized banking system. But so far they have simply traded a Wall Street bank for an Internet bank as some of the biggest and most popular exchanges are in reality centralized and thus have full control over the users' funds.

A person entering the cryptocurrency space looking to buy their first bit of Bitcoin would more than likely go to a popular exchange, such as Coinbase in the US, deposit money to the exchange and trade that money for their digital currency.

More advanced users who want to trade in altcoins could go to another major exchange, Binance. What started as an unknown Chinese exchange in late July 2017, is now competing for the number one spot in the cryptocurrency trading volume.

CEO of Binance Changpeng Zhao has the flair of a rock star with a slight touch of a Robin Hood. Zhao, better known as CZ, has famous in the crypto community when he saved thousands of Binance’s users from the travails of the Viacoin pump and dump affair.

In March this year, a major phishing attack struck Binance as some naive or greedy users recklessly used for trading ready-made bots that were laced with malicious phishing codes. Anyone was able to download these bots from GitHub, input their private keys, and begin bot trading with an eye to make a profit.

The malicious code gave hackers access to people’s assets, but more importantly, it allowed them to control the bots in order to pump and dump a coin. The bots bought as much as they could of a low liquidity and obscure coin named Viacoin. The attackers accessed the phished accounts on Binance and dumped all the crypto on balance of the accounts into Viacoin via market buys.

The price of Viacoin soared multiple hundreds of percents in minutes. Then the attackers sold the pumped Viacoin for Bitcoin and attempted to withdraw their funds in Bitcoin.

Then stepped in CZ. Accounts were frozen permanently, trades were reversed, funds were returned and the attackers’ funds were donated to charities. All's well that ends well? CZ was lauded as a hero, he repelled the attack, saved the users, punished the attackers, and as if it weren't enough donated the funds to a charity.

But, just because it sounds like a happy ending does not mean that it should not be scrutinized. Essentially, CZ was at once judge, jury and executioner. He used total control to dish out his justice… No democracy, no decentralization, just one man at the pinnacle of control.

Let’s be frank. Major cryptocurrency exchanges are centralized and operate like digital banks anyway. Their centralization brings about another aspect, less pronounced but no less scary because of that.

Coinbase collects sensitive personal information on its clients, it has the ability to freeze accounts, it charges fees for its services, it can be hacked and it can even collapse with all of its users’ money in it. These are exactly the same problems that normal banks have, aren’t they?

Related
Giving Each Other a Helping Hand: Traditional Finance and Crypto to Lead Each Other Forward

To call the cryptocurrency space entirely decentralized because of the Blockchain decentralized nature is a strawman fallacy. There are multiple examples of how a few people rule the entire space.  Why is that happening? Partly because in this nascent space, there are still a few pioneers, few names that control certain spaces by default - for many, Binance is a synonym for “crypto exchange,” and CoinMarketCap is another word for “crypto market data.”

These pioneering companies sit at the top of their game without much competition and little precedent or repercussion for actions - which is a prime environment for centralized control.

Anyhow, the modest two men, Changpeng Zhao and Brandon Chez, have already shown to have made huge moves in an ecosystem that prides itself on being decentralized and thus, technically, immune to individual manipulation and control.

The fact of the matter is that in theory, decentralization exists, and can operate perfectly well in an ecosystem that prides itself on it. But in practice, that is not the case. People are inherently controlling, and enjoy the power and pride that comes from it.

Related
The Power of One: Do Whales Have the Power to Rock Bitcoin’s Boat?