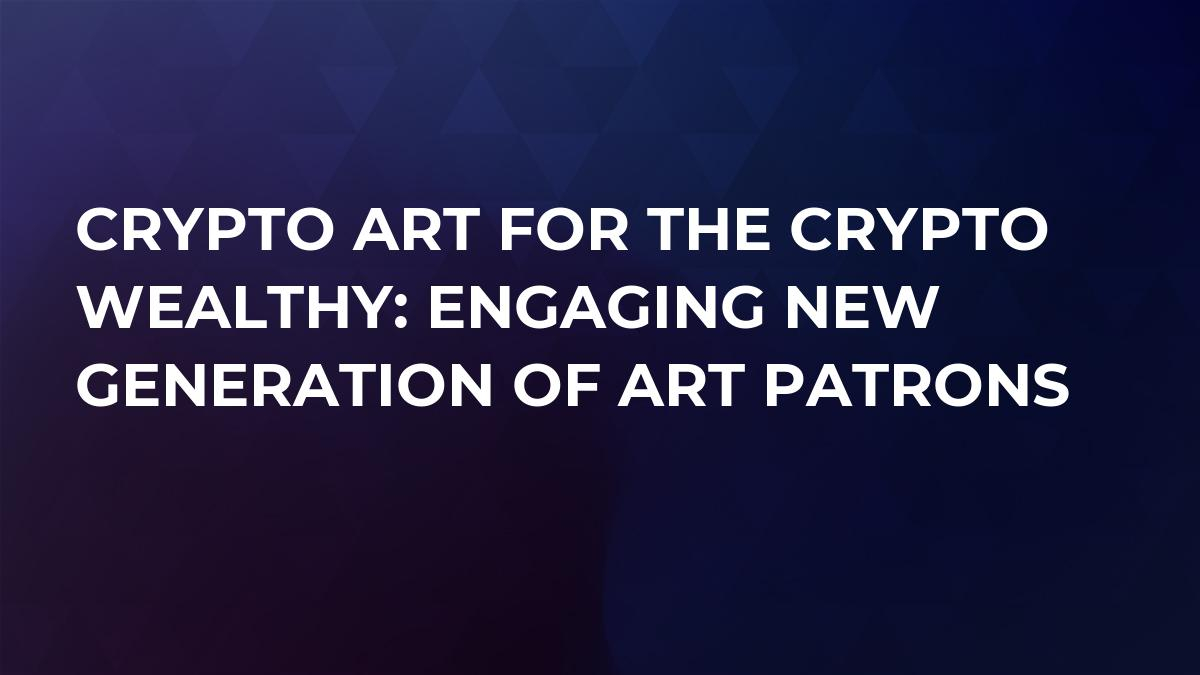 Just a year ago, fine art was one of the more obscure subjects for Blockchain application, but in recent months discussions about how this new technology can help move the venerable industry forward (and bring in new sources of revenue) have heated up, with major players like Christie’s, Art Basel and Britain’s DACS joining the conversation.

In the world of fine art and other collectibles, the investment potential of a particular piece is largely defined by its provenance and authenticity. The existence of immutable, indestructible records on the Blockchain may encourage more people to see art as a viable and trustworthy long-term investment opportunity.

Perhaps even more intriguingly, Blockchain opens the door for digital art as an investment through the introduction of digital scarcity. A piece of code representing some form of artistic expression can be certified and stored as a unique digital object– an idea which is quite a leap from the “copy-paste” digital world most are accustomed to.

The concept is quite new, and the most profitable sale of a purely digital artwork to date may have been that of an exclusive CryptoKitty auctioned off at the Ethereal conference this summer for a very respectable $140,000. The auction in question was the first practical demonstration of the Codex Protocol, a decentralized registry for assets including not just art, but also fine wines, watches and other collectibles. CryptoComes spoke to Codex CEO Mark Lurie about his impressions from the auction and expectations of the protocol’s development.

Katya Michaels: What is the main purpose of the Codex protocol? How has this been demonstrated at the Ethereal auction?

Mark Lurie: Codex is a decentralized registry for unique assets focused on art and collectibles in particular. It's really needed because this is the only asset class without a title registry, but a system of record is very important because the value of the piece in art depends on its provenance and history of ownership. Codex is a place where that information is stored and tracked. Once you have the title, you can access insurance, shipping, artists royalties, appraisals.

At Ethereal, we launched our bidding application and gave out the first Codex titles. I think the excitement about the auction proved that the crypto people want to buy and invest in art as an asset class, especially if you give them an easy way to bid and track ownership.

KM: Historically, patronage of the arts had been undertaken by contemporary elites. Today’s tech entrepreneurs seem to be in that position, but the question is how the art world can attract their interest. Will crypto and blockchain technologies encourage them to get involved?

ML: Collecting art is human nature. You just need to deliver the kind of art that appeals to the new generation of wealth. In the case of tech, maybe they don't like the same things that the traditional art industry has been selling them, but they clearly like CryptoKitties, they like digital art and they like the idea that digital art can be scarce.

When you can make digital art scarce and when you can prove original ownership of unique art, it becomes an asset class that has value. Digital art is a really exciting new category. At the auction, we sold about $190,000 worth of digital and physical art. For the crypto community, it’s exciting to see a way to buy art that is most convenient for them, as well as a way to be confident about the resale value of what they buy over time.

ML: I think we can consider it a huge win. It proves that digital art is going to be a big art investment category and that artists are going to be able to make a living producing it. It's a whole new medium. That's very exciting.

ML: Absolutely. This is one of the things Codex hopes to make possible.

KM: Perhaps it could also enable artist “ICOs”– mechanisms through which an artist could raise money for their next project by selling shares in the work.

ML: I think the idea of benefactors or the public commissioning art is something that's as old as time. Artists could certainly do an initial art offering. This can also be done with existing artwork- we have already partnered with a few companies that will sell shares in pieces to be owned collectively. People who have a Codex title be able to easily access fractional ownership clapboards.

Garbage in, garbage out

KM: Though highly secure and immutable, Blockchain is still a database– once the information is in there we can see the chain of events, but what prevents people from putting in fraudulent information originally?

ML: Today, it’s not that fraudulent pieces aren’t out there, but that good pieces have good proof of provenance and evidence of authenticity. I don't think you need to stop the garbage. You need to raise up the high-quality stuff. As long as the buyer can see that there's good evidence about the authenticity of a piece, that the item has been validated by the community and that it was sold by Christie's in the past– that’s what we want to accomplish.

There’s an aspect to the Codex protocol where appraisers, artists, galleries and auction houses get rewarded with tokens for validating pieces. They are rewarded for verifying that the information about a particular piece is correct. I don't think it's necessary to prevent garbage. All that's necessary is to empower people to tell the difference between the good stuff and the garbage.

KM: What are some of the other ways, besides rewards for validation, that the token is used on the platform?

ML: The utility token is used to access and change the database. If you want to transfer a title, add a lien to a title, add insurance or request an appraisal, those all require tokens. The fees are used for rewards to validators who make sure that the items in the database are accurate and vetted.

KM: What are some examples of third-party applications that can be built on the Codex platform?

Another is a company called Dust that connects physical items to digital records. They spray inexpensive industrial grade diamond dust on a piece. It's invisible to the naked eye, but you can scan the crystalline fingerprint with an iPhone and prove that the piece is actually the one that's recorded on the Blockchain.

KM: How soon do you think will major players like Christie's and Sotheby’s get onboard with ledgers like Codex and crypto payments?

ML: I can't say exactly, but I think it'll be sooner rather than later. Once they see it in action,  once they see the benefits and that it's stable, they'll get onboard.

Portrait of the crypto artist

While traditional galleries and auction houses figure out how their business model will be affected by Blockchain art platforms, it is difficult to say where artists will emerge from the fog of rapid technological change. Undeniably, Blockchain holds a lot of promise for giving creators more control over their art and a greater share of the profits. Cryptograffiti, one of the artists who contributed work to the Codex Ethereal auction, shared some thoughts on the issue with CryptoComes over an e-mail interview.

KM: Do you think today’s tech elite can become the new generation of art patrons, supporting not just particular pieces but the art industry in general?

Cryptograffiti: Absolutely, however, I think to some extent it's cultural.  For example, my hometown of San Francisco is not known for being at the forefront of the art scene because people don't display their wealth as much as other cities like New York. Many of the SF/Silicon Valley tech elite have made their money while sharing a room with two other developers and another one who sleeps on the couch.

KM: Is there a particular kind of art the crypto-wealthy audience responds to? Is crypto art more compelling for them?

C: I think crypto art has proved to be compelling for a number of reasons. With the subject matter being intangible, it provides identity and emotion to something people are very passionate about. Many are proud of their involvement in crypto and what it stands for and want to put that on display. Artwork, and especially limited-edition artwork, is an investment that overlaps well with the controlled supply of cryptocurrency's beginnings.

KM: What is the most important way that Blockchain changes the art industry?  Establishment of provenance? Protection from theft?

C: These are huge. Also, democratizing investment in artwork and providing additional revenue streams for artists. And the ones we don't know about yet!

KM: Cryptographic technology makes digital scarcity possible- are you excited about the reality of unique digital artworks? What are some specific applications that you are looking forward to?

C: Yes, however, we have a ways to go.  For instance, right now if you own a digitally rare item like a CryptoKitty and the parent company goes under, what you really own are just lines of code...not the cute cat to which you've grown attached. This will change as the various platforms upon which these projects are based scale.

KM: Does Blockchain open doors to new revenue sources for artists? How about for less well-known artists, who are not participating in the big auctions and multi-million sales?

C: New revenue sources for artists were one of the reasons I was initially drawn to the space.  Several years ago, I started attaching QR codes to street art to experiment with receiving instant patronage from passersby.

While micropayments haven't yet lived up to the hype, they will be game-changing. Poets can charge by the poem, journalists by the article, musicians by the listen. People will tip a driver that lets them merge– any situation where a positive experience warrants a tiny show of appreciation.

Smart contracts will also mean artists don't have to die to earn a living wage. Right now if I want to secure royalties on future sales of one of my works, it is prohibitively expensive due time, contracts and lawyers involved.

KM: What would be your advice to fellow artists in terms of joining Blockchain art platforms and accepting cryptocurrency?

C: My advice to fellow artists is to jump in and experiment. Recognize that much like the cryptocurrencies themselves, many of the blockchain art platforms will not survive.  Thus, do some research about the people involved and what they stand for. It's a really exciting time for art + crypto.

Amidst the excitement generated by Blockchain applications, it’s important to keep in mind that the same principle applies as to any other database or ledger– garbage in, garbage out. An immutable record of an artwork’s provenance is of little use if the record is fraudulent or erroneous to begin with. Undoubtedly, as Blockchain protocols for art records become more commonplace, mechanisms will develop to address such challenges.

Digital records of authenticity and unique digital art are certain to change the nature of art collecting. With an increased focus on art as capital and some collectibles, such as CryptoKitties, existing without any physical manifestation, the relationship between the personal experience of art and its perceived value is likely to be redefined. At any rate, Blockchain art startups are carving out a niche in the global art market, already valued at over $60 bln– something certainly worth considering for the artful investor.