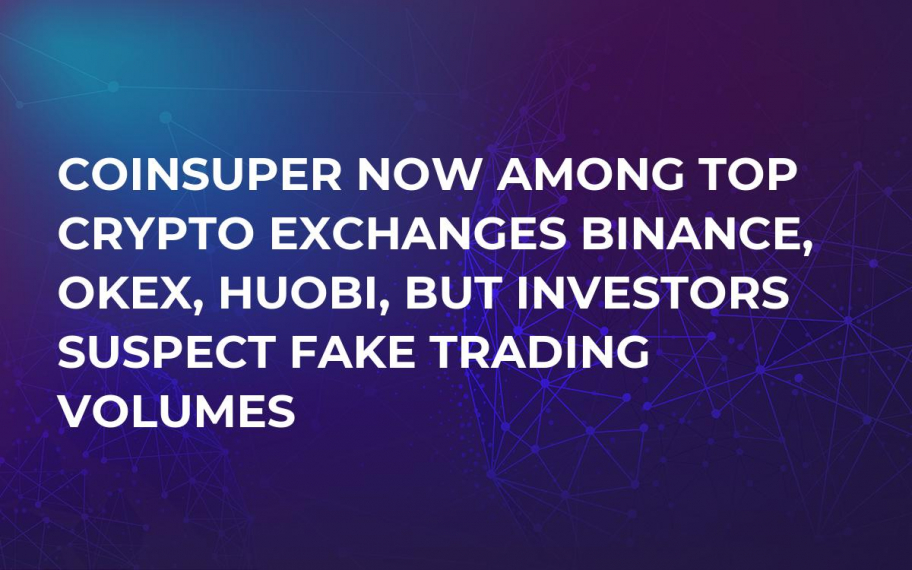 A short while ago, Coinsuper was an ordinary unpopular trading platform. Now it stands in one row with such heavy-weights as Binance, OKEx and Huobi. The exchange rose from its previous 16th place to the fourth one right within a month.

Even though it happens that new trading companies see a sudden rise in its trading volume, dramatic growth of them to almost $1 bln in such a short time is startling. The crypto community is already discussing this case, recalling all ways of faking trading volumes on exchanges.

Not long ago, Coinsuper threw into circulation its own coin CEN, which CoinMarketCap does not know about, so as to provide support for the ecosystem of the platform– Coinsuper Ecosystem Network.

Also, as of July 16, the exchange plans to initiate transaction mining. This is a sort of system of rewards for trading. Traders do not mine tokens but they get not to pay fees and receive up to 500 CEN as a reward for making trading transactions on the exchange. This greatly contributes to the growth of trading volumes on Coinsuper. It is not the same as faking volumes but it may raise the price of CEN.

On the exchange’s website, it says that the hourly and daily mining progress will be shown on the site’s homepage and in the customers’ account pages as well.

The growth of the Coinsuper and its volumes happened simultaneously with the appearance of vague new exchanges. They quickly gained trading volumes too. Exchange, such as Bitforex, that have lately been adding NOBS (No BS Crypto Project tokens) now are the aim of criticism regarding their unbelievably large volumes.

Often enough, when an exchange launched its own coin, like Binance Coin (BNB) or KuCoin Shares (KCS), it starts promoting the token and begins raising doubts and skepticism. These native assets add the exchange liquidity and may be used as protection against price risks from other crypto coins.

Nevertheless, the rate of these native market coins may create force liquidity, so some traders consider fake orders behind them.