Blockchain and Crypto Offering Opportunities to Women Not Seen Elsewhere

Darryn Pollock
Blockchain tech is touted to be a disruptive new wave, and for those involved, it also offers an opportunity for women to stake dominance 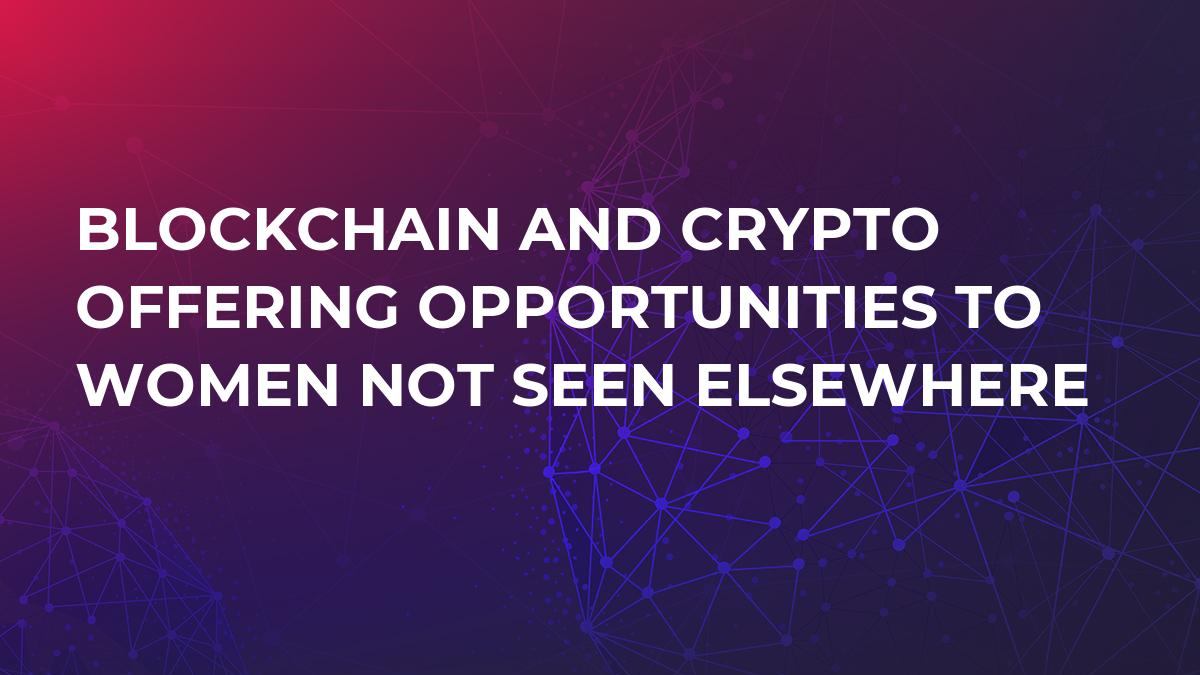 While the cryptocurrency and Blockchain space may have begun as  male-dominated space, there is every opportunity and reason for more and more women to enter the space. This new area of technology has no real barrier to entry, no old boy’s clubs or traditional prejudices, and can benefit from a whole other side of society pushing its growth.

A number of women are staking a claim in the bustling ecosystem, entrenching themselves in different facets of Blockchain and cryptocurrency. Women able to enter the space without the same issues as other traditional spheres of business, such as banking and IT, and as such, are able to add some much needed muscle.

It may have something to do with its technological roots, but the Blockchain and cryptocurrency space has a male domination of around 91 percent, according to Coin Dance. But there is a big drive for that to change.

“There’s a lot of wealth being generated, and a lot of times we're left out of the conversation. It's left to the males, the husbands, the partners, significant others, etc. But it's just as easy for us to get involved,” said Shanah Walton, an investor in crypto.

"My primary goal is… to promote diversity in the space, and get women involved and let them know it's not as hard or as nerdy or as techy as you would think it is.”

The Blockchain and cryptocurrency space also offers a lot of bonuses that are particularly beneficial to women. The evolving space does not adhere to 9 - 5 office bound work, and is rather far more global, flexible and fulfilling.

“Most people I think that I've interacted with are working from home or a coffee shop or wherever is most expedient. So for moms, that's a huge opportunity,” Meredith Davis, a former US Marine who also worked in government for years, and is currently seven months pregnant, said.

For pregnant women, mothers of young children, or even stay at home moms, there is opportunity to work in a busy and burgeoning space just with a laptop from any location.

“It’s a global market. It’s 24 hours. So after the kids go to bed, you can get on your computer and do anything,” Walton added.

Using it to their advantage

The Blockchain environment is also offering women a  chance to enter a business space that they can dominate in, and design to their own needs and wants. The rules are not hard and fast, and as such, there is room for women thought leaders to utilize the technology.

Adryenn Ashley, CEO and founder of dating app Loly, spoke to Cryptocomes about the ‘bro culture’ that is still prevalent, but is being challenged with more women entering the space.

“We already know this, so women should be getting more investment, but they're not– just because of the way the system is designed.”

Additionally, Leah Callon-Butler, co-founder and Chief Impact Officer of Intimate, a cryptocurrency and platform aiming to facilitate payment and trust for the adult industry, also notes how women in the space can being a lot more in terms of different skill sets.

“Blockchain is a space where it's all about decentralization, it’s about giving power to the least represented and the most vulnerable,” she told Cryptocomes.

“I guess I'm relatively new to this space and sometimes it's hard because you think - if I'm not a computer scientist or an engineer or a mathematician or a cryptographer, then maybe I shouldn't be here,” Callon-Butler added.

“But I have different skills that I bring to the space and the social impact is something that I'm really passionate about - seeing more women in technology, more women recognized for what they do. Diversity and inclusion is one of the most powerful mechanisms of competitive advantage that we have.”

Blockchain and cryptocurrencies have long threatened to disrupt a number of different sectors from finance to technology and everything in between. But this new space also offers an opportunity for the male-dominated and directed working environment to be put on its head.

This disruption opens up new avenues for women to enter a work space that suits them far more than what has been seen in the past.