Bitcoin Tumbles Below $8,000 Amidst String of Bad News

Darryn Pollock
When Bitcoin first spiked above $8,000 recently, it was amid a host of good news, however, its fall back down comes with a spell of bad tidings 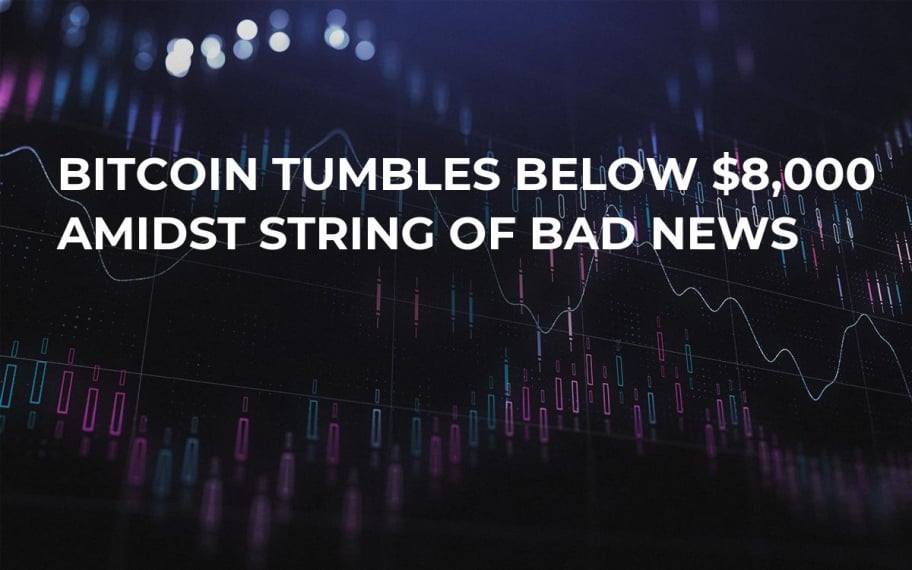 After finding a comfortable position around $8,200 Bitcoin has taken a downward trajectory after a few days of flat movement. The original cryptocurrency has fallen significantly past the important $8,000 mark, sitting just above $7,500.

While there is no direct catalyst for this latest dip, there is a bit of bad news around which could be weakening the bullish sentiment which was building. But unsurprisingly, the news has a lot to do with regulations.

Korean Tax benefits on the ropes

Many in the West can be quite ignorant of happenings in places like Japan and Korea which are key strongholds for Bitcoin and other cryptocurrencies.

In South Korea, there is a bill on the table which would effectively end tax benefits for cryptocurrency exchanges.

Local authorities were cited as saying “cryptocurrency transaction brokerage is not effective in generating added value.”

"While crypto markets have seen rapid growth, such trading platforms don’t seem to be well-enough prepared in terms of security," said Hong Seong-ki, head of the country's cryptocurrency response team, South Services Commission. "We’re trying to legislate the most urgent and important things first, aiming for money-laundering prevention and investor protection. The bill should be passed as soon as possible."

Nobel Prize winning economist Paul Krugman has also expressed his concerns about cryptocurrency and what they cost as well as the fact that they are intrinsically valueless and not tethered to anything physical.

Krugman argues some fair points which will resonate with traditional investors, such as the group mentality of the market.

“If speculators were to have a collective moment of doubt, suddenly fearing that Bitcoins were worthless, well, Bitcoins would become worthless," he said.

There is also additional information coming from market research firm Forrester Research which estimates as many as 90 percent of Blockchain-powered projects will “never become part of a company’s operations.”

Their research shows that 2018 will be a watershed moment for ICOs and other Blockchain projects as many will have to prove themselves a year on from making outlandish promises.

“Those who failed to translate the headlines into reality will write off their investments and give up, while others that have a deep understanding of the technology and its transformational potential, in the long run, will continue to forge ahead,” they wrote

None of these factors are big enough to push the entire crypto market off its keel, however, they will have an effect in the speculative market that is the cryptocurrency one. Negative news and comments often make investors nervy, and the first sign of decline often snowballs.