On Wednesday, January 9, the upper ten coins on Coinmarketcap look pretty well. Nearly all of them are in the green.

BCHSV is the only loser

With Tron (TRX) on Monday pushing out Bitcoin Cash SV from its 9th spot on the top-10 list, BCHSV is now the only crypto asset in the red. Over the last 24 hours, it has dropped a little, whereas the other top ten coins are rising.

The top gainer today is Tron, having added 5.34 percent at the time of writing this article.

The other eight virtual assets have risen within 2 percent, more or less. The top three gainers here are Litecoin (+1.75 percent), Ethereum (+1.72 percent) and EOS (+1.67 percent).

Must Read
Zilliqa Team Fixing Bugs in Preparation for Mainnet Launch, ZIL Rises from #33 to #30 on CMC - READ MORE

As U.Today reported earlier, Tron swapped places with BCHSV, exceeding the latter by the market cap value. Now, one of the major Tronix, a co-founder of IAmDecentralized.org,  has announced on Twitter that Tether (USDT) stablecoin will be the next for Tron to move out of the way.

As the entire market is in the red, #TRON stands out as the 1 and only #crypto in the green w/ +6% increase 💹

Curiously, Tron has almost caught up with the stablecoin by the market cap figure. The similar situation was with Bitcoin Cash SV and TRX got over that gap within one day. 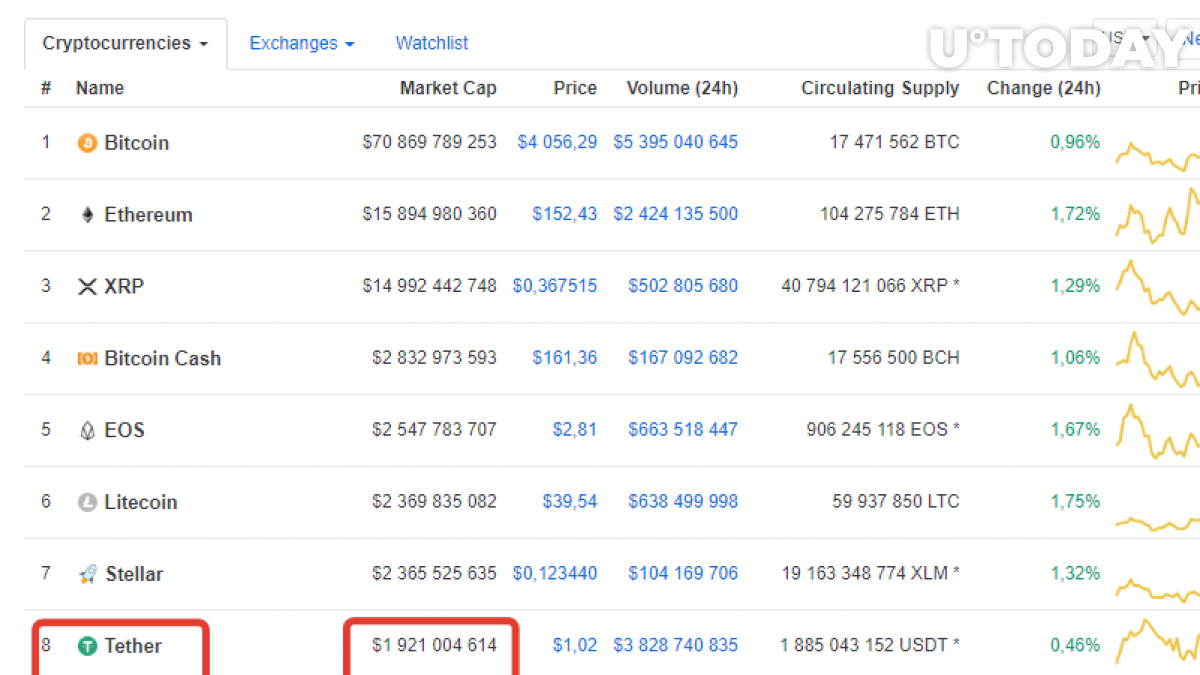 Tron Arcade fund has reported in Twitter that the first dApp ever made on Tron, Tronbet, is among the top-five dApps on the Dappradar.com website. It holds spot #5.

As for the list of top coins from #20 to #10, the worst performers here today are Dash (-0.01 percent) and the Maker stablecoin (-3.08 percent). Curiously, Maker has recently managed to enter the top-20 ‘club’ whereas before it had been hanging just outside it for quite a while.