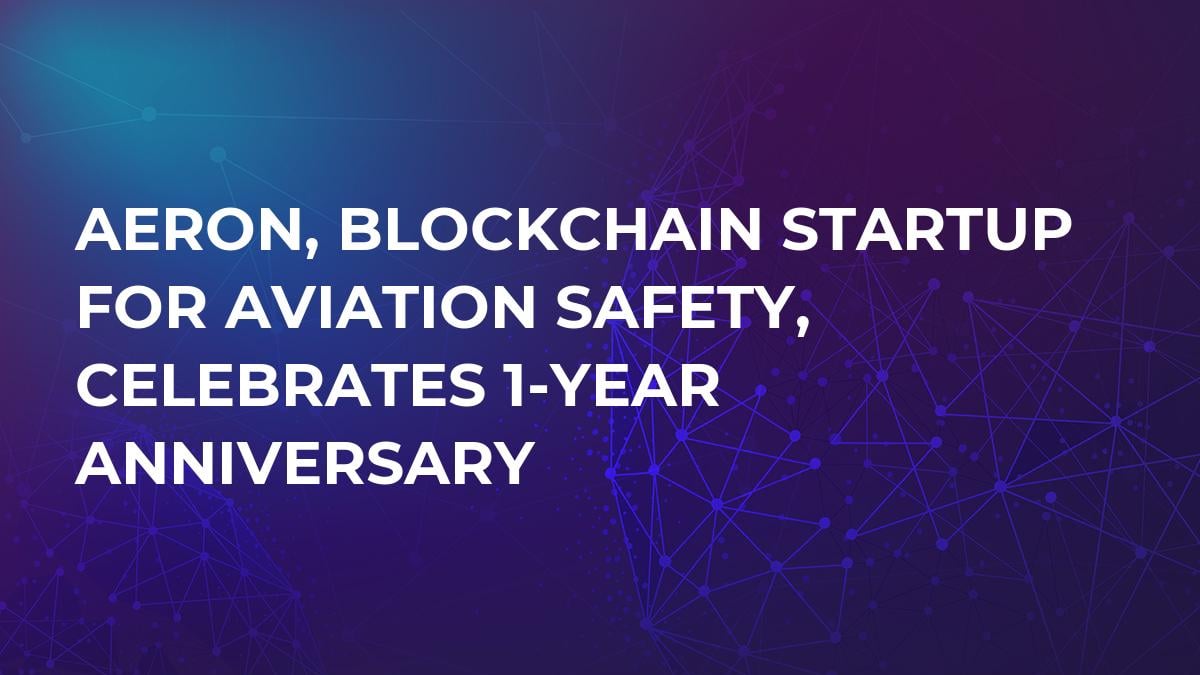 It’s been a year since the Aeron Blockchain project was announced to the public, and the team has already managed to make a significant progress towards its goal to contribute to improvement in aviation safety. A few crucial roadmap milestones were reached successfully bringing the company acclaim from partners and supporters.

Aeron serves as Blockchain-based flight log and aircraft maintenance data platform. With its deployment, private pilots, aircraft operators, flight schools, and aircraft owners can get access to up-to-date and reliable information, including pilot’s experience record. Aviation enthusiasts and the general public can search for curated flight and training offers.

In August 2017, the Aeron project was presented for the wide audience: the team stepped up with an innovative Blockchain-based solution for flight data management. Successful Aeron (ARN) utility token sale in September-October 2017 helped the initiative to gain momentum and leverage some advanced technologies.

During this year, Aeron has been successfully following the roadmap steps, such as:

All that helped Aeron to get established and have its ARN token supported by multiple platforms, including the leading Ethereum ERC2o compatible wallets and instant exchanges (Changelly, Coinomi, imToken, SimpleSwap, Lumi etc) and be present in over 16 cryptocurrency exchanges, including the world’s largest (Binance, HitBTC, Bit-Z, Coinrail, KuCoin, DDEX and others). Aeron Pilot log application is already available in Google Play and Apple App Store.

The rate of adoption is pretty quick: 100-150 flight schools join Aeron monthly, and the number of Aeron Pilot application installations has achieved tens of thousands. The application has already helped to record over 10,000 flight logs and is continuously being improved.

Besides, a number of important partnerships have been announced this year, including leading aviation academies and aviation training centers.

Aeron joined National Business Aviation Association (NBAA) and European Business Aviation Association (EBAA)– their expertise and support will enable further growth and development.  Also, the team took part in international aviation conferences and shows, such as EBACE Geneva and Aviation Festival Asia in Singapore which was organized recently. The concept introduced by Aeron was welcomed by major representatives of the aviation industry– that means the team is on the right way.

Being a Blockchain-based solution Aeron promotes transparency and trustworthiness of data. However, in the past year, the project scope was limited to aviation professionals and general aviation enthusiasts. Not anymore– Aeron opens up to bring benefit to anyone who flies, including passengers of commercial airlines. With Aeron-powered bonus miles (loyalty) platform to be deployed later this year– anyone can get crypto rewards and take participation in major airline loyalty programs. That is new to the Aeron roadmap. Therefore, from now on, the platform targets not only aviation professionals– the public can reap benefits from it, too.

As an early adoption of Aeron (ARN) token takes its foot, anyone interested in the aviation industry can visit the online shop at aerotrips.com to purchase aviation supplies and branded items payable with cryptocurrencies and ARN token.

The next year promises to be rich in advances. Human factor and lack of data integrity are the major aspects putting flight safety in danger. Blockchain is a cost-effective solution that allows reducing the impact of all these problems at once. Aeron project raises the bar for aviation safety standards and continues its work to make flying more fun for everyone.