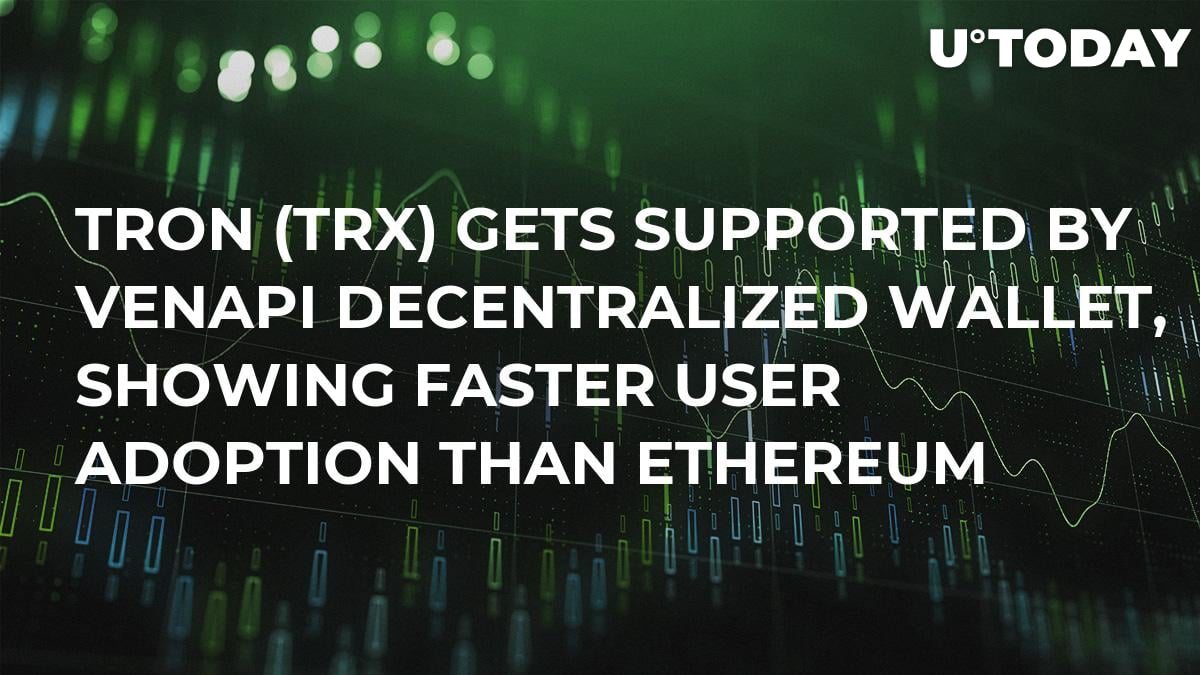 On Tuesday, December 25, the CEO of Tron, Justin Sun, posted a tweet stating that TRX can now be stored on the new VenaPi decentralized crypto wallet. Sun adds that the new dApp wallet is easily compatible with all other dApps built on the Tron ecosystem.

#TRX is now available on VenaPi which dedicates to building the best TRON #DApp entrance based on #TRON ecosystem. @VenaProtocol team developed a decentralized wallet that is compatible with all eco applications in the mobile end to provide users with the best experience. $TRX pic.twitter.com/gQXIVtkDLc

The wallet developers also point out that by storing TRX on their new wallet, Tronics (i.e. Tron community members, Tron hodlers) can earn interest in TRX in the current market which is again being dominated by sellers despite the bullish rise we have seen for a few days.

Vena network is an open-source protocol allowing to work with tokenized asset financing and exchanges.

On Monday, U.Today reported that over the weekend the Tron network reached 1 million active accounts. At the moment, Justin Sun is looking for the 1-millionth user on Twitter, promising him/her a prize of $10,000.

Besides, on Sunday, Binance paired TRX with the newly added base currency – XRP. This made Ripple rise over 20 percent, Tron back then showed an appreciation of around 11 percent.

Curiously, on Twitter Misha Lederman, a co-Founder of IAmDecentralized.org, has made a post, showing that Tron is gaining faster adoption among users than Vitalik Buterin’s Ethereum.

As per him, Tron acquired 1 mln accounts within half-a-year of the mainnet being launched. To compare with Ethereum, ETH reached the same milestone within 18 months of the mainnet setoff; that is, Tron got there 3 times faster.

In comparison,#Ethereum reached 1 million accounts on Jan 22, in 542 days or 18 months since #ETH Mainnet Launch

The same guy today tweeted that Tron now has a new game developed on it that allows predicting NBA game results. The game prediction dApp is dubbed Tron Arcade.

This is yet another example of an #Ethereum based project going live on TRON w/ the support of @TRONArcade $100 million gaming fund ?#IAmDecentralized ??@fomosportsgame$TRX https://t.co/ZRgyDXf8Cg

Even despite the numerous achievements, Tron is currently in the red, since bears have returned, ignoring Christmas and the miracles it traditionally promises. Over the last 24 hours, TRX has lost 14.20 percent, currently trading at $0.0198.

The biggest losses among the top-10 coins at the moment are demonstrated by Bitcoin Cash (-18.93 percent) and Bitcoin Cash SV (-15.85 percent).