Darryn Pollock
ICOs have a failure rate of more than 50 percent, and there have been some big ones already 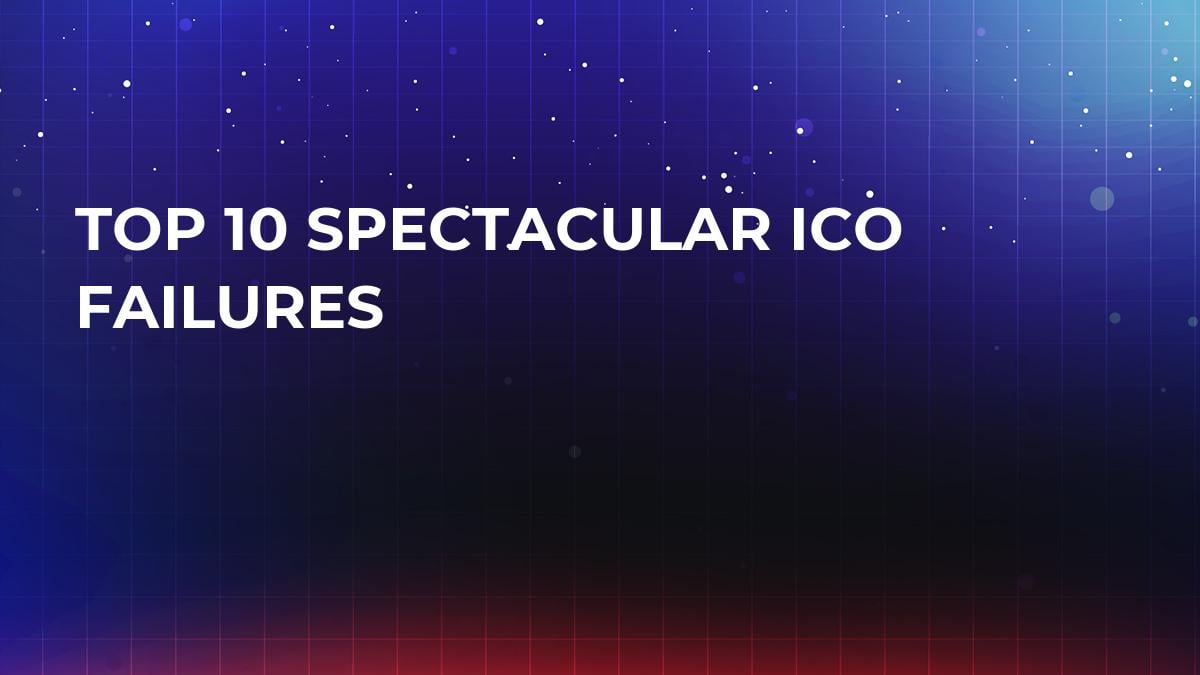 ICOs, which have really only been around in full flight for a few years, have had an interesting growth pattern. The hype that was 2017 when it came to ICOs saw a lot of bright ideas, with very little execution.

There have been many failures along the way, in fact, nearly half of all ICOs from 2017 have already failed, some within only months.

As ICOmania grows and continues to grow, more money was thrown at the market, and more companies were tasked with pulling off their promises. Some of these companies failed speculatory while others have slowly died and taken their investors money with them.

2017 was the best year yet in terms of money raised through ICOs as it was calculated that over $3 bln was raised in that year alone.

But that money raised hasn't all been appropriated well, below is a list of 10 of the biggest ICO failures on record.

One of the biggest and most well known ICO failures was that of Ethereum’s DAO. DAO, the Decentralized Autonomous Organization, was an announcement that sent ripples of excitement through the crypto community.

DAO was to provide a new decentralized business model for organizing both commercial and non-profit enterprises. It was a premise that excited many and saw a flurry of buying when the ICO was announced, bringing in a record-breaking $168 mln.

However, an attack exploited a vulnerability in the DAO smart contract, resulting in a loss exceeding $50 mln. Once news of the attack circulated, traders dumped the DAO token, sending its price spiraling downwards.

OneCoin was an infamous ICO failure because it was a scam and labeled by many as a Ponzi scheme, in fact, it had all the obvious makings of a Ponzi scheme, yet still managed to trap investors.

This multi-level marketing Ponzi scheme was all hot air as there was even little evidence to suggest a coin had been created. The team had little concrete to show investors, and certainly no working prototype. Some of the team’s biggest members had previously been linked to other scams.

Police stepped in and at a OneCoin meet raided and arrested 18 people, but not before OneCoin scammed investors out of $350 mln.

Tezos had a monumental rise to prominence in their record-breaking $232 mln ICO, but it all came crumbling down as the team behind it all began infighting and arguing.

Despite the fact that Tezos was able to one of the most successful token sale campaigns in ICO history, the conflict between management brought to panic among the investors and fall for 75 percent in a few hours.

They technically have not failed yet, and are continuing on, but the company is fraught with lawsuits and continued fighting and does not look to be doing well.

Enigma is a security and cryptography coin, that boasted about its new encryption methods. However, ironically, the Enigma team were hacked just before their ICO was to go live which saw hackers get away with $500,000 worth of Ethereum.

Enigma’s mailing list, website and Slack accounts were all hacked and the hackers used Slack to reach out to investors about a fake early ICO. Some called the email a scam, but many bought into the message and sent the funds.

SpaceBit as the definition of all sizzle and no steak as this ambitious project garnered a lot of attention but ultimately ended up fading away to nothing as the team jumped ship after years of producing no results.

Branding themselves as “the first decentralized space company,” SpaceBit announced its idea to the world in late 2014.

The company wanted to launch several “nano-satellites” into orbit to provide a globally-accessible Blockchain.

However, by early 2015, all the hype and interest dies down as the team behind SpaceBit started a new Blockchain company, BlockVerify.

SwissCoin was brought to the ground when the Ukrainian Prosecutor's office, along with the national police exposed the fraudulent Swiscoin project, whose creators are suspected of embezzling investments worth more than $500,000.

SwissCoin promised to develop a system of instant, virtually interest-free payments anywhere in the world, but no white paper was published, and there was also no information about the developers.

PayCoin began in 2014 by the notorious Josh Garza and GAW miners but showed a lot of promise with an interesting white paper that talked about building a new breed of cryptocurrency.

However, when it came to launching the ICO, the developers rushed it out as another generic altcoin clone in the hopes of hitting the market and pumping the coin.

After a huge launch, and a big boom in market capitalization, things started to deflate as the team failed to keep their promises. One of the major ones was the $20 pay floor, which also failed and saw a mass exodus of interest.

Some scams in the ICO world work because they look so good from the start, but others are really poor and lazy to begin with.

Droplex was a lazy scam attempt that was quickly called out. Droplex’s white paper was a carbon copy of QRL’s white paper. Literally word for word.

People soon got stuck into Droplex for their shoddy attempts and they capitulated quickly, only making off with about $25,000.

CoinDash, having only raised $6.4 mln, had to admit defeat when they were hacked out of $7 mln leaving them flat broke. The method of the hack is uncertain, but some sources speculate the hacker created an identical website to the team’s. Others think he or she simply changed the payment address, to divert funds.

Gems, or GetGems, is more of a failure because it performed so underwhelmingly after promising so much. In 2014, the company said it would disrupt social media as we knew it.

However, At the end of 2014, the company reported a disappointing crowdsale, raising only $111,000, which pales in comparison with a number of ICOs at the time which were crossing the million dollar mark.

Gems is still running, but the app itself is very unpopular on Google Play store and other apps marketplaces. It is only relatively successful in Uzbekistan.