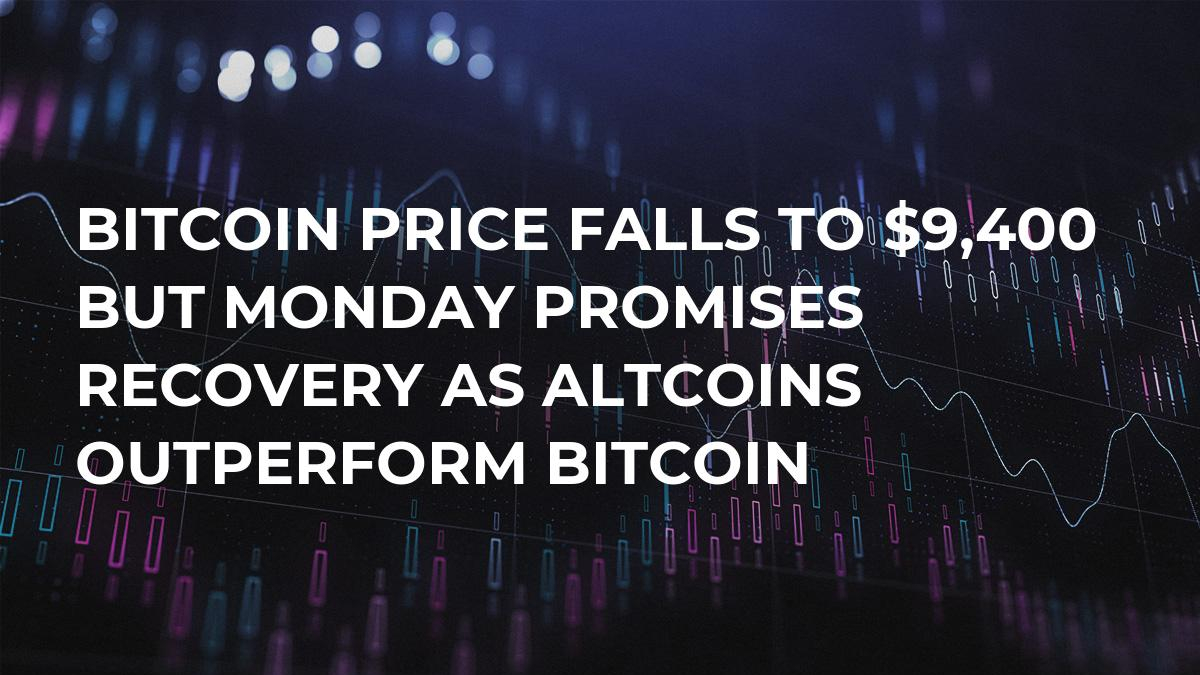 Last weekend was another nerve-racking one for cryptocurrency investors: the market continued to fall, although the rate of asset price decline slowed significantly compared to the middle of the week.

On Sunday we watched again as the bulls timidly attempted to change the situation, but their indecision precluded a clearly defined turnaround. So now, by the beginning of Monday, some positions have finally “turned green,” while total market capitalization grew to $435 bln, which is $15 bln higher than on Friday.

Common sense does not allow us to declare a full reversal of the bearish trend just yet, but our regular readers know that the first signs were already noted a few days earlier. Now, the issue of principal concern is that of trading volumes, which are not manifesting yet.

The market continues to be carried down by momentum, and support can only come from buyers with renewed strength. Perhaps help can be expected from China, where the New Year celebration is coming to an end.

Analysis of the top 10 currency prices allows us to draw the following conclusions: altcoins are again attempting to show a quicker turnaround than Bitcoin, the price of which hardly changed during the day and stays around $9,600.

Litecoin is in first place with a gain of 13 percent. February has been eventful for this asset: its hard fork was completed a week ago, and the launch of the payment system LitePay, which we discussed earlier, is planned for the end of the month. The coin stays in the news cycle, which helps its growth.

Cardano is in a distant second place, having grown by five percent, and the trio of leaders is rounded out by NEO, with two percent growth. It seems that investors are losing patience and while Bitcoin is cooling its heels, they are shifting attention to other assets. This is a sure sign that the market is ready for a trend change. And there’s no reason to be concerned about Bitcoin; it will definitely regroup in due time.

The framework we sketched out earlier remains relevant. We can see that the $9,400-$9,600 zone has become a tangible obstacle for bears, and even after breaking through the resistance it returned again to the upper boundary of the range. Another piece of good news, the recent downtrend from Feb. 20 has been broken and can no longer constrain buyers.

At the time of writing, Bitcoin price movements are forming the “bullish pennant” figure, in case of its activation, the critical resistance level at the boundary of the long-term descending channel could be re-tested. However, first, it will have to overcome the mirror level at $10,500 which halted growth over the weekend. We estimate the odds of moving to growth as three to two. In case of negative developments, the next support is located at $8,900-$9,000.

Litecoin has become a frequent guest in our reviews, but we cannot ignore it, the price fluctuations and the attention of the crypto community are too significant. The reversal combination of Japanese “hammer” candles worked perfectly on Friday, Feb. 23 and prices did not fall below $182. Over the following three days, prices rose by 25 percent and now the asset is trading around $230. In an unstable market, such buyer perseverance indicates the great investment potential of Litecoin.

The first prospective growth target is $250, which coincides with the previous high for the last month. It is followed by $280, indicated by the 2.618 Fibonacci extension, based on the correction of Feb. 5-6. Finally, the third target is located in the $300 zone, formed by the 1.618 level of the "fresh" Fibonacci grid. The nearest resistance on the way to the indicated targets can be encountered at the boundary of the $235-$240 range, where the strong mirror level is placed. Reliable support is on the boundary of the ascending channel. Given the support that Litecoin has received from buyers recently, increasing long positions in limited volumes can be considered from the $208 level.

If we were asked, which asset is most inclined toward triangle formations, we would certainly choose Ethereum. And now, the charts are showing a bullish triangle, the activation of which can push the price to $920. Meanwhile, ETH is preparing a springboard for further growth at the $840 mark, where the maximum volume of trades has been made over the last few days.

The nearest resistance is located on the boundary of the younger descending channel and approximately coincides with the $880 mark. We believe that if the global market reversal is confirmed, overcoming this resistance will not be impossible for buyers. In the event of negative developments, price supports can be expected at the level of $820, mentioned earlier, as well as $790.