Alex Dovbnya
Bitcoin forks are on the rise, but they may be shut down if there is a change in the open source nature of the code. 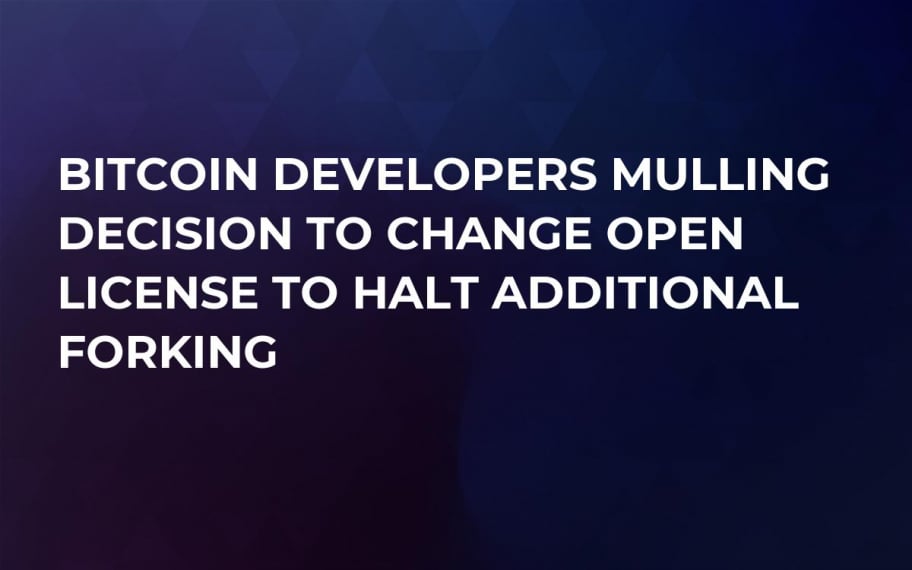 Bitcoin’s code is an open source MIT License that has allowed its use to be freely accessed and copied. This has led to a number of forks, including a major one in the Aug. 1 Bitcoin Cash fork. However, the ensuing battle between the coins emanating from this split could lead to a change in the open license.

Bitcoin’s developers are now mulling over a decision to change the open source MIT License, and if this was to go ahead, further forks might not be able to use the original source code.

There has been speculation that 2018 will see as many as fifty more Bitcoin forks, some of them much more dubious than others, and many of them indiscriminately made for the sake of aligning a coin with an established brand.

The ICOmania that permeated 2017 could change to fork mania this year as many have come wise to the fact that ICOs are often scams or not well aligned and thought out. This latest move sees people trying to capitalize on the Bitcoin name by forking off the original coin.

There has already been confusion and consternation across the forked community as proponents of Bitcoin Cash and the original Bitcoin battle it out about the correct use of terms.

The proposal put forward by Bitcoin developer Jose Femenias, suggests the addition of wording on the MIT License that would make it difficult to profit off Bitcoin’s brand after forking from the cryptocurrencies Blockchain.

Femenias suggests simply adding the following to the license, in order to stop the profiteering:

“No part of this software can be included in any other project that uses the name Bitcoin as part  of its name and/or its marketing material unless the software produced by that project is fully compatible with the Bitcoin (core) Blockchain.”

The suggestion has garnered a variety of reactions with most of those involved seemingly against it. However, there are positive arguments to go ahead with the suggestion.

“The reuse of the Bitcoin core code can allow even a child to launch a form and this mess should stop,” writes Aymeric Vitte, a user of the forum. "Maybe people like to get 'free' coins, but they are misled, they can lose everything and there are some more vicious side effects, like replay protection collisions between forks.”

For the developers, the issue really comes in the decentralized nature of the code and the logistics of enacting this protection. For starters, ownership of the Bitcoin core software is unclear. Currently, the MIT Digital Currency Initiative partially funds development costs, and the code is maintained by a team of developers. Hence, it would be difficult for someone to claim ownership and sue another party for using the software.