Between Manipulators and the Forces of Nature: How Bitcoin Market Works

Vadique Magenta
There are no manipulators: cease your struggles and become one with the market forces. 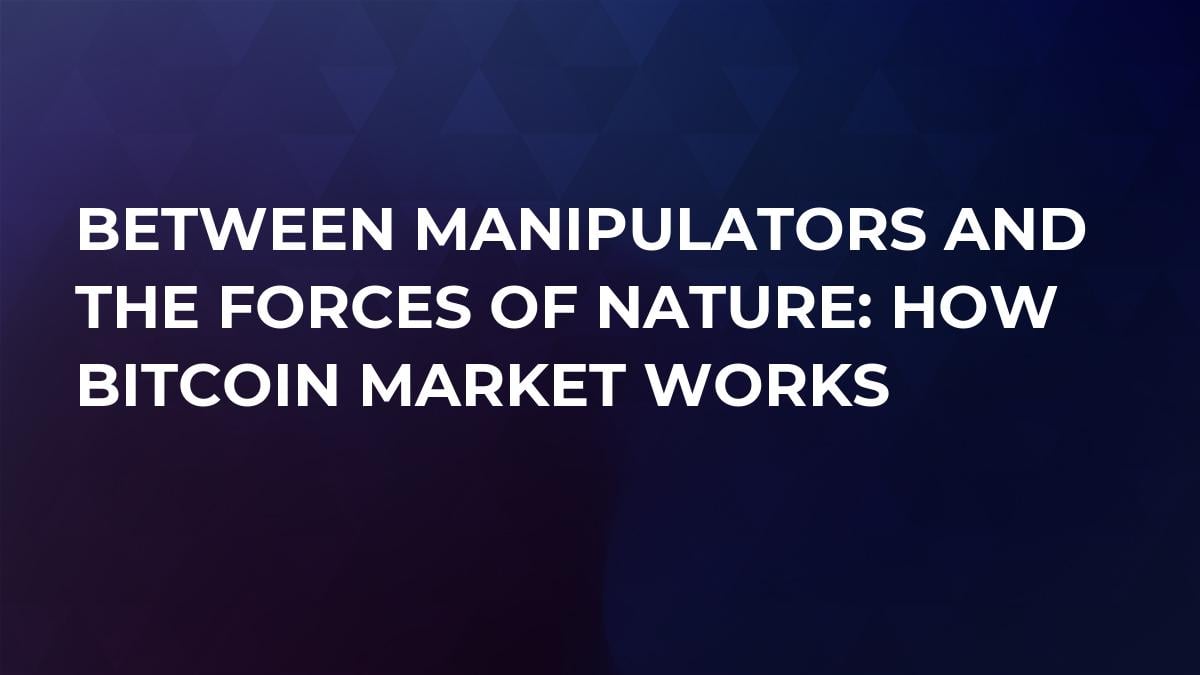 When I see hoards of young and inexperienced traders musing about manipulators and puppeteers, I am amused. They believe that some particular entity can control the price of an individual asset or the entire market as a whole.

If so, then God is just an old man in the clouds.

Yes, of course, there are significant levels where redistribution of assets between the participants takes place. Yes, at these levels, smart people take money from not very smart people. Yes, there are news cycles that will affect the overall market’s mood. Yes, there are some cases when the price is heavily influenced by large orders or by means of high-frequency algorithmic robots. All this is true, but...

Part of the market

The political insiders, the managers of large funds and groups of big players who enter conspiracies to enrich themselves- they are all part of the collective consciousness of the market. Like the archer and his arrow, market participants and the price are one with each other, and it is impossible to be entirely sure if the archer guides the arrow, or the arrow guides the archer. What does all this mean?

It means that even very big players, upon entering the market, become subject to a force of nature. Yes, they are piloting formidable battleships rather than fragile dinghies, but even they cannot completely bend the ocean to their will. How many examples does history provide of failures by large banks and funds? Without exception, they were all confident in their powers.

Venture into the market as sailors do the ocean, as miners into the coalpit, as samurai into battle. Do this not as if it was the last time, but the only time, freeing yourself from the memory of past victories and defeats.

Be a blank page. Forget that last month you made enough to buy a sports car, or last year lost half of your assets. All that is completely irrelevant. There is only the price, the market participant, and what happens between them here and now.

Why do I say this?

Because many times have I fallen and risen because I have been on both sides of the barricades. I have been the ruler and the ruled. I have been inside the ring and out. And I have learned that, no matter how powerful your boat is, sailor, the ocean is stronger!

When you think that you have everything under control, it’s an illusion. At any moment, something can go wrong and a storm can rise up that will wash away the markings on the sand, the idle onlookers and the coastal inhabitants, as the ocean opens its bottomless gaping womb and swallows all. Respect it, and perhaps you’ll be lucky enough to survive and learn something in this merciless school of life.

I am often approached by attorneys, bankers, lawyers, businessmen with the debris of their deposits after another storm, and all of them confess that the market has been the most serious trial on their professional path. This is true.

His Majesty the Market transforms everyone’s ideas about the very nature of money, allowing you to touch this exhilarating and ever-changing flame that can be warm but can also be scorching.

And what do the big players do? Like metal workers, they hit the molten hot price with a hammer. As in the Large Hadron Collider, they subject the price to bombardment by particle beams. Like in a stress test – they hit the concrete wall along with brainless dummies. Do you understand what I’m getting at?

All this works well while the elements let you put your sails to the wind. But if the storm begins, experienced seafarers prefer not to leave the quiet harbor ...

So, by and large, manipulators exist only in your head. And your fantasies about them make it difficult to see the true nature of the market, as something unconscious and immense, something that is alive and always changing, something magnetic and entrancing...

If I were asked what the market is most like, I would probably say that it’s something unique and incomprehensible, similar to Stanislav Lem's "Solaris." Perhaps so...

This intense interest in the actions of major players and constant attempts to unravel their plans grow into a kind of paranoia. All everyone does is talk about the “whales,” check wallet balances and calculate current pricing for special-order news...

I ask you only one thing: free yourself from the thought that someone is running the market! It's impossible. Stop evaluating the situation with the help of your flawed “human” notions. If you follow this advice, you will make substantial progress toward understanding the market as something living and real, not something manipulated and artificial — and then, something ineffable will make itself known to you…

May the force be with you.

Examples from the storm

For particularly curious readers, I made three "photographs" from the very heart of the storm, when Bitcoin corrected by 70 percent and dragged the rest of the market into the abyss. What was that? The self-manifested nature of the market or the actions of manipulators? You decide…

The price at minimum values shows record volumes, after which the market reverses.

At the level of $7,800, a mysterious "iceberg" appears, which does not allow the price to go lower.