SEC Targeting ICOs: How Should You React if Subpoenaed?

David Dinkins
Evidence is mounting that the SEC is conducting a widespread investigation of ICOs, so how should you respond if you receive a dreaded subpoena? 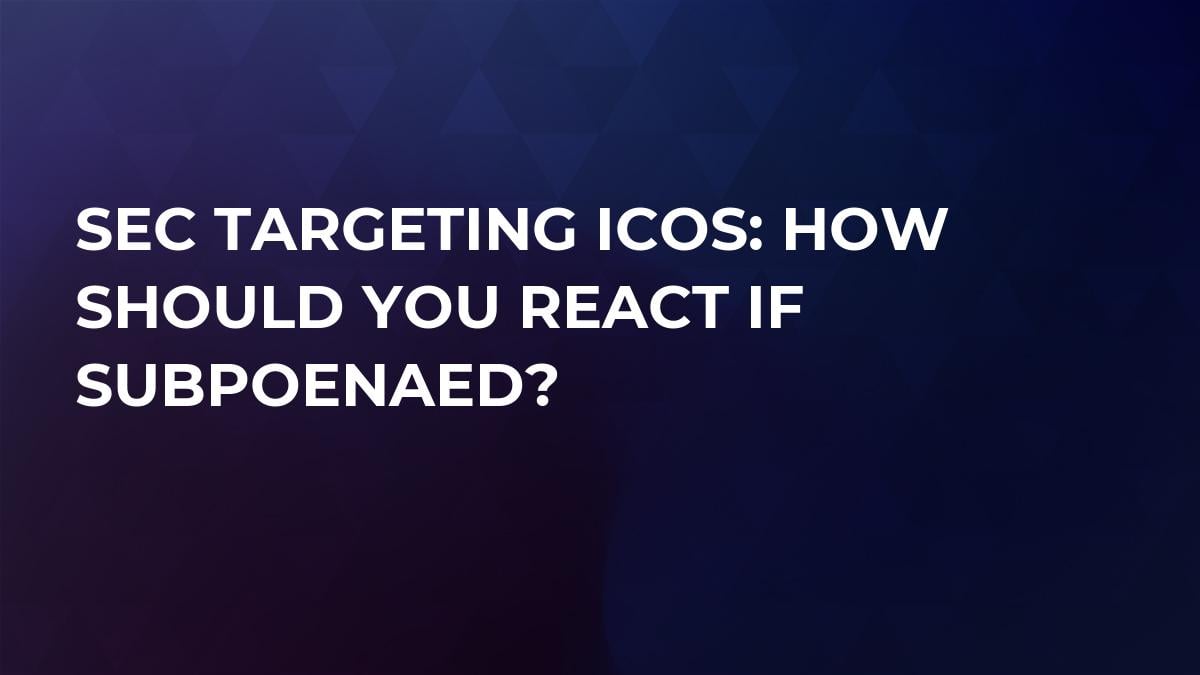 When SEC Chairman Jay Clayton said before Congress, "I believe every ICO I've seen is a security,” he apparently meant it. Rumors have been swirling about a massive SEC investigation targeting numerous ICOs, and some have speculated that the SEC is going after so-called “SAFT” tokens in particular.

Before we go any further, let’s take a step back and start from the beginning. When the first hints came out last summer of possible SEC actions against ICOs, clever lawyers spilled a great deal of ink trying to create legal defenses for their projects. One of the legal theories advanced was that tokens could be split between securities tokens, which give an ownership stake in the project, and utility tokens which simply allow people to use the platform but not possess an ownership interest. Of course, if the utility token should appreciate in value between the ICO and the platform’s launch, so much the better.

SAFT stands for “Simple Agreements for Future Tokens,” which seeks to classify tokens issued in an ICO as “utility” tokens despite the fact that the platform on which to use that token does not yet exist. While the SEC has yet to rule on whether SAFT tokens are in fact securities, sources think the regulator may be ready to come down hard on such tokens. One source commented:

"The SEC is targeting SAFTs. The new approach of the SEC is to consider tokens as both utility and security at the same time, meaning a token can bring utility to a platform but at the same time can be considered as a security if you sold it to parties that mainly looked for profit on its increase in value."

Attorneys from King & Spalding were kind enough to speak to CryptoComes, suggesting 10 tips that ICOs follow if they receive an SEC subpoena. They noted:

“Receipt of a subpoena alone need not cause a massive disruption to your business. But failure to respond appropriately almost certainly will.”

King & Spalding suggested that companies who receive a subpoena, first and foremost, must not ignore the subpoena or bury their head in the sand. They must hire outside counsel, preserve all documents and minimize non-privileged conversation about the subpoena. The attorneys also suggest keeping detailed records of the process and realizing that the SEC will be taking equally detailed notes, so one should be sure not to get caught in a lie.

Finally, whether you want to admit it or not, King & Spalding say “witnesses are everywhere.” Don’t assume that your team is totally loyal and wouldn’t go behind your back to blow the whistle on any wrongdoing. Instead, be honest and forthright, and be patient, because an SEC investigation is a long process. Finally, start working with a PR firm and think of how to handle the public relations aspects of the situation.