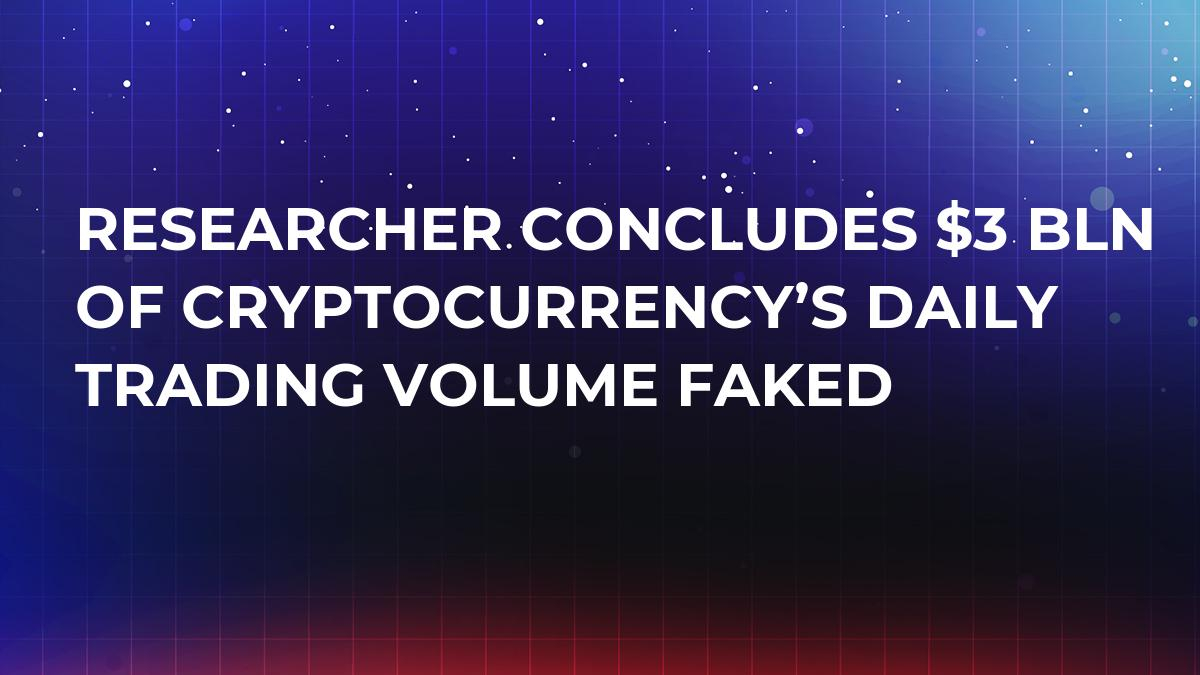 One researcher has presented a credible case arguing that over $3 bln of daily cryptocurrency trading volume is “fake.” Daily trade volume is the amount of cryptocurrency that changes hands each day on digital currency exchanges and can be an important indicator of the market’s health.

For example, if Bitcoin’s price goes up on high volume, it’s likely a real, sustainable move. If the prices rises on low volume, however, it could be only a brief rise before a subsequent fall- what we call a “fake out.” Having high trade volumes also make an exchange seem more relevant and implies greater liquidity, which can draw more traders.

A researcher named Sylvain Ribes decided to study the liquidity of the crypto markets and concluded that a significant percentage of the trading volume of all cryptocurrencies is fake. By fake, he means that the volume numbers published by exchanges are either outright fabrications or more often, are the result of wash trading. The practice of wash trading involves a trader buying and selling to himself - he creates a buy order and then immediately sells to his own order. This creates the illusion of greater volume and can be used to manipulate markets.

Ribes decided to conduct a test to see how much slippage would occur if he dumped $50,000 worth of several different cryptocurrencies on a number of different exchanges. Slippage is the amount of price movement that occurs when a large sell or buy is conducted all at once rather than being spaced out over a period of time. For example, dumping 1,000 Bitcoins on an exchange would cause the price to fall. The amount of the decline is known as slippage.

What Ribes discovered was surprising - the amount of slippage was fairly uniform across exchanges such as GDAX, Bitfinex and Bitstamp. But when he conducted his tests on several other exchanges that claimed to have huge trading volume, he noted that the slippage was much greater than expected. This was counterintuitive since greater trading volume implies greater liquidity and less slippage.

The worst culprits were the formerly Chinese exchanges (now moved to Hong Kong) of OKEx and Huobi. The exchange with the greatest fake volume was OKEx, which, according to Ribes:

“[These] numbers...prove to me without the shadow of a doubt that a suffocating majority of OKex volume is fake...about 92.9 percent of all OKEx’s volume is most likely fabricated.”

He says that Huobi is nearly as bad, with:

“81.8 percent of made-up volume, not quite as shameless as their most direct competitor but still extremely high.”

Ribes also points out that there has been a raft of new exchanges that nobody has ever heard about with absurdly high trading volumes. All these exchanges appear to share the same interface and trading engine, making them highly suspect.

Ribes argues that the issue of fake trading volume matters a great deal. In the absence of government regulation (in most cases), it’s important for market participants to self-regulate. He also argues that fake volume make markets quite easy to manipulate:

“By inflating their volume, [these exchanges] position themselves in a way that could allow them to defraud gullible investors. [Even if you’re not] gullible...they can and they do have an impact on some cryptocurrencies valuation. Litecoin and Bitcoin Cash notably, have had as much as 75 percent of their volume circulating on one or the other of these exchanges. OKEx alone consistently accounts for over 30 percent of either currency’s volume.”