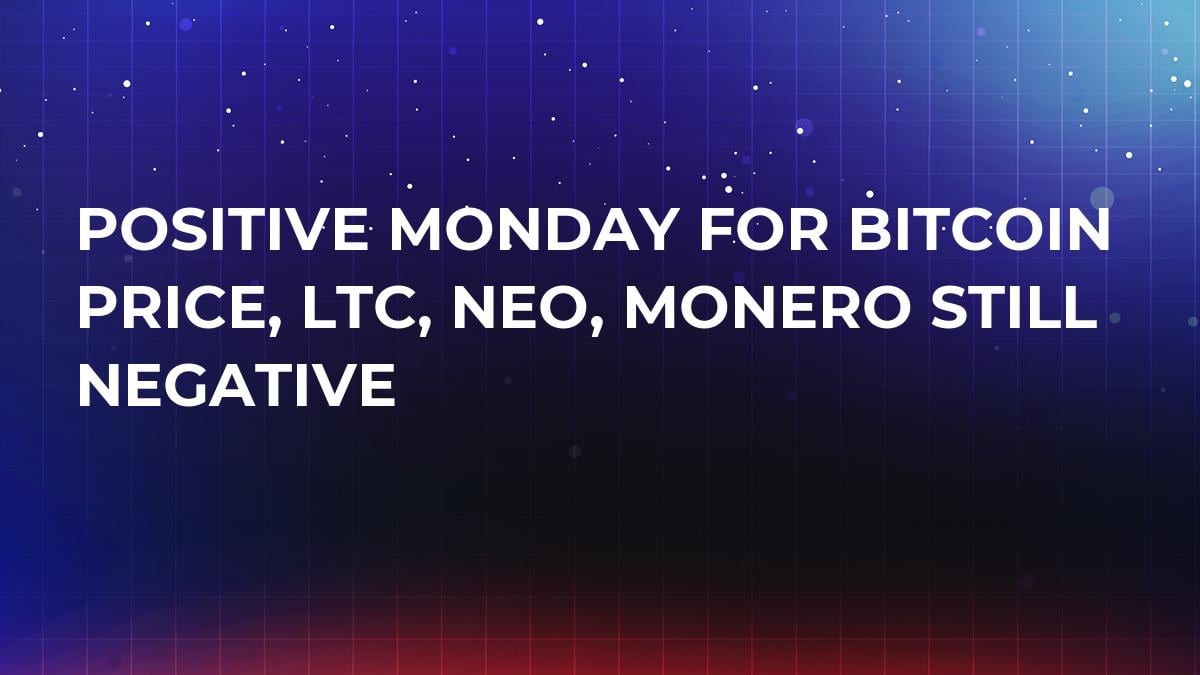 Bitcoin is starting the week positively as bulls got a momentum. The Bitcoin price still has some room for further growth until the closest resistance level. Litecoin and NEO follow almost the same scenario. As for Monero, the cryptocurrency seems to remain under pressure.

BTC/USD still goes upwards on the Daily chart as it fluctuates along the upside trend line and is testing it today. Depending on the results of this testing, BTC/USD is likely to either fall below the trend line, looking for a major support line, which lies around 7,000 area or to resume its growth towards the resistance line, which is close to 11,500 level.

Generally, BTC/USD price fluctuates within a large horizontal channel established by the above-mentioned support and resistance levels. There are no candlestick signals currently.

As for the Ichimoku indicator, Bitcoin price went above the upper side of the cloud demonstrating bulls commitment to change the tendency and reach the closest resistance line in the medium term. However, BTC price returned to the upper Ichimoku cloud line in order to test it (which is natural for this kind of indicator). If the line resists and gives support to Bitcoin price, bulls will probably have a good chance to reach their mid-term goals. Otherwise, bears have a chance to gain momentum again.

As for the hourly chart, BTC/USD still has the same direction, going along the upside trend line. There were two chances yesterday to open short-term long positions from the trend line. Bitcoin price has a correction now as we can see the Shooting Star candlestick pattern. We expect the correction last until the upside trend line, where BTC price is able to reverse again towards the resistance line, which is close to the 9,500 area.

As for the Ichimoku indicator, BTC/USD is below its cloud but is likely to meet it today. If Bitcoin price enters the cloud, there will be opportunities to trade from its borders (channel trading).

Litecoin goes the same direction as Bitcoin does, but Litecoin price is close to the resistance line. Bulls were trying to assault the resistance at 180.00 last week, but they had no luck and enough power to break through this line. Litecoin price jumped off 180.00 and went towards the upside trend line, where it stays now, waiting for bulls and bears to take active steps. If LTC price breaks through 180.00, the next midterm target will be close to 240.00 area.

As for the Ichimoku indicator, Litecoin price resides within the cloud and rejected its upper side. Now it has two ways- to go downwards and to test the lower side or try the upper side again (the trend line may support bulls and help them to stop the correction, which is clearly seen on the chart at the moment).

The situation is favorable for short-term bulls as LTC price goes along the upside trend line and rejected it twice already. However, there is a high probability for a downside correction now, which is able to aim the upside trend line. The closest target for LTC/USD on the hourly chart is 171 area, where the resistance line lies.

When we look at the Ichimoku indicator, we can see that the bulls still try to break the situation and to gain momentum. However, LTC/USD fluctuates below the cloud, which means that bears still have some power. We expect the currency pair to reach the Ichimoku cloud today and to test its lower line.

Monero is still under the pressure as it fluctuates below the downside trend line. Midterm bears drive the currency pair even further downwards and their next target seems to be close to 175.00 area support line.

Monero shows no sign of a tendency reverse. Monero price has recently jumped off the downside trend line and is slightly going down.

Bulls are able to make a counter attack either now, when Monero price is still close to 250.00 area resistance line or close to the 175.00 support line area.

As for the Ichimoku indicator, Monero fluctuates within the cloud. Monero price rejected the upper side and is going downwards to test the lower line which is also not far from 175.00 level.

Monero price is close to the resistance on the hourly chart. Bears still have power as they do not allow bulls to make any further steps above 235.00. However, if we take a look at the whole picture, we can see a kind of reversed head and shoulders formation and if it is real, we are in the neckline area now. The next resistance area will be close to 242.00 level.

Monero enters the Ichimoku cloud but does it quietly, with no momentum. Short term traders should pay attention to what is going to happen in the nearest future. If Monero goes through the Ichimoku cloud, it may gain momentum and reach 242 area even today. As for the alternative scenario, Monero price is able to reverse towards the lower line of the Ichimoku cloud.

NEO price stays within the Ichimoku cloud and is quiet. The volatility is low. There are no clear signals currently.

Short term NEO/USD traders may rely on profits from long positions, as NEO price continues to go upwards and has already broken through the resistance level at 80.00 area. The next target lies higher close to the 84.00 area (current resistance level). Bears still able to test the support line but bulls look stronger at the moment as they have gained momentum already.

NEO/USD is able to meet the lower side of the Ichimoku cloud in the nearest future. Here NEO price may stay for a while or may skyrocket higher beyond the cloud. In the second case, we can see NEO/USD touching resistance level even today.