Eric Eissler
Stox started out white hot, but it was tied to Bancor and that brought the curtain down on the token 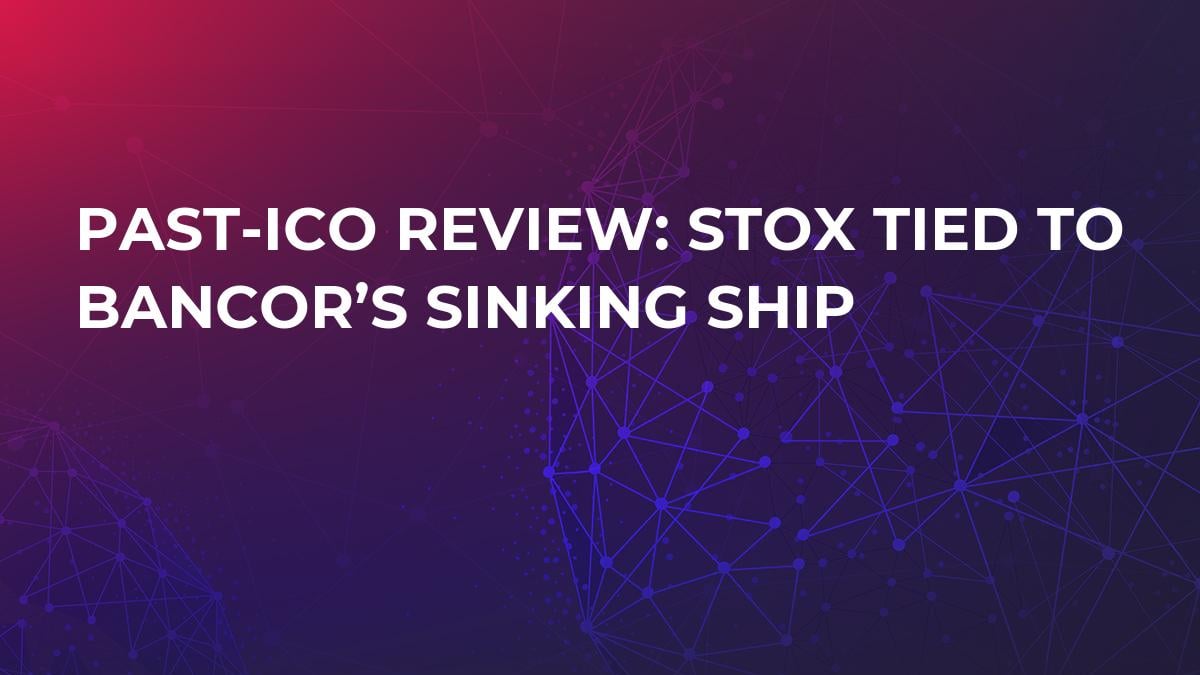 When the ICO took place, it was a sure bet that investors were placing their stock in Stox, a open source decentralized prediction market platform based on the Bancor protocol. This platform allows users to make predictions on pretty much anything that can be predicted, such as sporting outcomes, elections, whether; you name it, you can probably predict it on Stox.

Gibraltar-based Stox ran an ICO on Aug. 2, 2017 that lasted for one day and raised between $27 and $30 mln in funding. However, the token, which was launched two days after the ICO closed, on Aug. 4, 2017, has been in decline since its entry into the market. It debuted at $1.21, peaked at $2.60 on Aug. 25, and then fell sharply to $0.42 by the start of October 2017. It saw a price surge in December 2017, and reached $1.66 but fell down to $0.36 at the time of writing, demonstrating that investors have shied away from this once white-hot ICO. For a prediction-based platform, what has investors spooked? There doesn’t seem to be a prediction section on how well Stox will fare on its own website.

Floyd Mayweather has been known to promote ICOs. He posted on Instagram about Stox, where he flashed a suitcase of $100 bills and boasted he will “make a $hit t$n of money … on the Stox.com ICO.” This is not the first time Mayweather has promoted a crypto. He also promoted Centra Tech, which ended up on CryptoComes’ Top 10 ICO Failures. Does celebrity promotion lead to the demise of companies using an ICO? It’s an iffy statement. It could be the fact that Stox rode on the coattails of Bancor, even basing its smart-contracts on Bancor’s model.

Do your homework before investing

Since Stox is based on the Bancor model, then it is understood why the price will go down. It is because any token created from Bancor will be tied into Bancor’s price. Bancor’s price is suffering since its debut in July 2017. Here is the reason why, taken from my Bancor Past-ICO Review here on CryptoComes:

According to Professor Emin Gun Sirer, Professor of Computer Science at Cornell University, Bancor will continue to trail the market and its lack of price discovery will diminish any smart tokens created from it.

This, in essence, will keep those coins [referring to any coins developed from Bancor’s Blockchain] from growing beyond that of Bancor’s price, remember they are tied together. In other words, the tokens created off Bancor have no chance to thrive. When the parent coin is going down, Bancor will take them down, too. Tim Draper, billionaire venture capitalist, and backer of Bancor argues otherwise that it will give liquidity to the market. If you bought Bancor, then liquidity is great, because you will want to sell it as fast as you can.

There you have it, it is the Blockchain Stox is based on that is dragging it down. The technology is cool and the users are enjoying the platform, who doesn’t love to take a gamble and place a bet, but its the parent Blockchain dragging down the token.

While there are many tokens out there that are based on other Blockchains, such as Ethereum and EOS, these have been proven and accepted by the Blockchain community to be the proper places to build from. In many cases, the axiom, “it is better to lead, than to follow” plays to truth, if Stox did not follow Bancor’s model, it might have had a better chance at improving it’s token price, but alas, it is tethered to Bancor’s sinking ship.