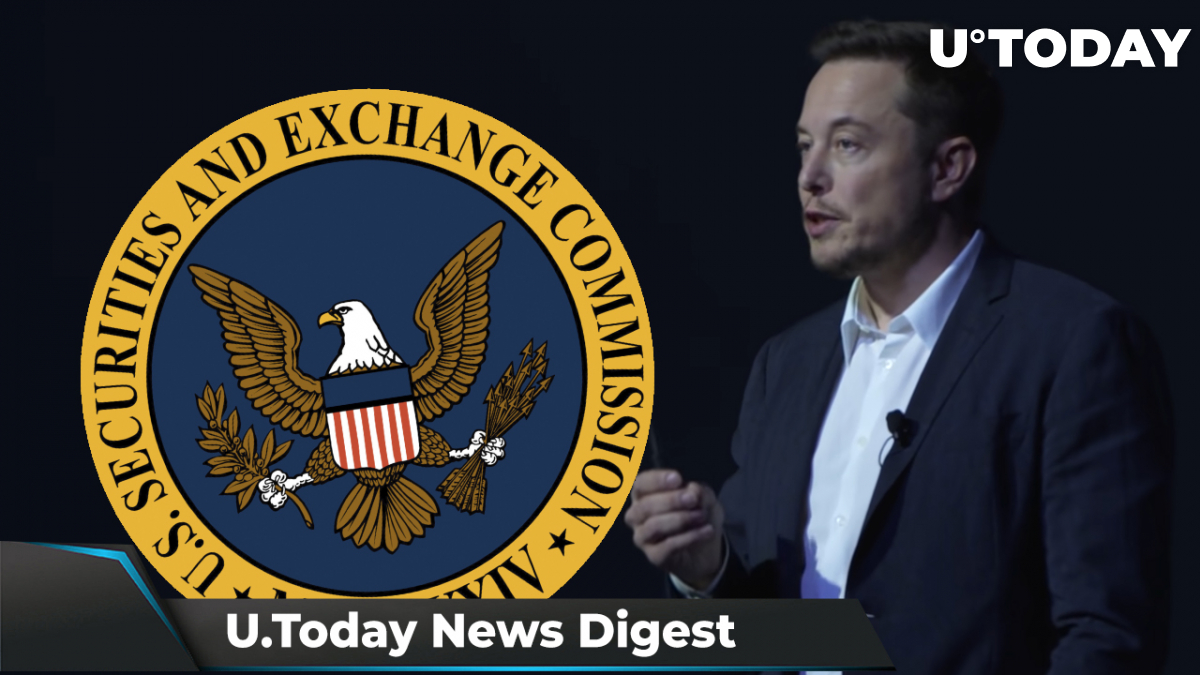 U.Today welcomes its readers at the beginning of a new week with the top five news stories from over the weekend.

After a recent piercing comment on Web3 technology, head of Tesla Elon Musk continues to mock its ardent enthusiasts. On Saturday, the eccentric centibillionaire posted a “Urinal Etiquette” comic devoted to people declaring their support for Web3 and DAOs. Musk is not the only skeptic of this new iteration. Cornell University professor James Grimmelmann recently described Web 3.0 as “vaporware.” Musk also criticized NFTs in reaction to a tweet by Dogecoin co-founder Billy Markus about the rise of scams within the industry.

Ripple and SEC have one day left to supplement their arguments

According to a tweet by James K. Filan, U.S. Magistrate Judge Sarah Netburn issued an order that asks Ripple Labs  and the SEC to "simultaneously" file new legal briefs before Dec. 8, 2021. New papers should supplement the parties' arguments regarding Ripple's latest motion to compel. The requirement to submit new briefs was undoubtedly eagerly anticipated by everyone following the case and should be viewed as a small victory for Ripple.

On Saturday, Neodyme crypto security researchers revealed a bug in the token-lending contract of the Solana Program Library, which affected numerous Solana-based DeFi protocols. The design of the hypothetical attack is the following: while depositing n fractional tokens, a user is able to withdraw n+1 fractional tokens. With Solana's native token, SOL, it will not be effective economically, but it can be very profitable for Ether and Bitcoin. If technically upgraded, the attack could be executed about 300 times p/s, causing serious losses.

Neodyme's representatives have contacted a number of DeFis on Solana: Larix, Solend, Tulip, Accumen, Soda and so on. For now, all teams have fixed the bugs in their architecture.

According to WhaleStats, “Dogecoin Killer” Shiba Inu retains its strong position on whale-tier addresses as the current bloodbath continues on both the Bitcoin and altcoin markets. While SHIB whales still hold $2 billion worth of tokens, the canine coin’s dominance among them has significantly decreased, remaining at 8%. SHIB’s price is not showing any signs of growth either: it lost about 15% of its value, failing to become a safe haven asset. After a strong correction, Shiba Inu now remains at a total loss of 66% from its last peak.

Despite this grim picture, Randi Zuckerberg, a sister of Meta CEO Mark Zuckerberg, believes that the meme tokens, Dogecoin and Shiba Inu, have become successful on the market. She even shared a video in which she explains how they managed to do that.

Yesterday, blockchain security company PeckShield reported that BitMart, a Cayman Islands-based cryptocurrency exchange, suffered from a $200 million hack. Among the most affected cryptocurrencies were Shiba Inu (SHIB) and Safemoon (SAFEMOON), with the latter accounting for almost half of the sum. BitMart confirmed the security breach, saying that the incident only affected a small percentage of its overall holdings. The exchange is yet to determine the probable techniques utilized to pilfer the wallets.